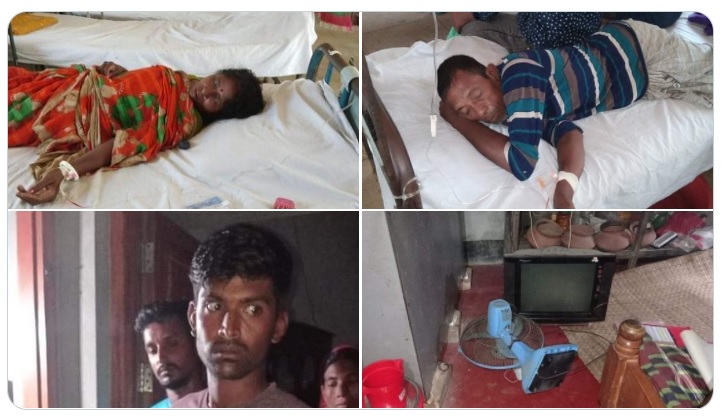 One would hope that the persecution of Hindus in Bangladesh would cease at least during the month of Ramzan. But that would be delusional. If anything, the tortures inflicted by the Islamist fanatics in Bangladesh upon the hapless minorities of the country have only seen an acute upsurge in the ‘holy month’.

On April 25th, union member and general secretary of the Awami League, Saiful Islam led a mob attack on Hindus. It is alleged that the fanatic mob attacked Hindus with country-made weapons in Eidgaon, Islamabad Union of Cox’s Bazar Sadar Upazila. As per Hindu activists in Bangladesh, 30 Hindus were rushed to the local medical facility after sustaining serious injuries from the attack. Bangladeshi Hindus are demanding implementation of a Hindu Protection Act and severe punishments for the attackers.

Cases of abduction and forceful conversion of young Hindu girls into Islam were also reported through the month. One such incident was reported on April 23rd from Ranishankail P.S, Tagorgaon district, after a 16-year-old Hindu minor, Brishti Mohanta was abducted and converted by one Mohammad Jashim. The next incident came to the surface just two days later. A young Hindu girl, whose name has not been revealed, was allegedly abducted by one Mohammad Luckman at Gazipur Sadar P.S, Gazipur district. Soon her picture with a legal document of conversion was made public on social media. Another Hindu girl, Bhumika Rani was abducted by one Mohammad Rana at Amdai, Sadar P.S, Jaypurhat district. She has also been converted to Islam.

Hindus in Bangladesh are livid about this unrelenting persecution of Hindu girls. There have been no reports suggesting that the administration of Bangladesh has acted swiftly post these crimes to protect the Hindus or rescue kidnapped Hindu girls and arrange their return to their families. The Islamists continue their malicious acts with impunity in the Islamic country.

The next planned attack on the Hindus took place just two days after the Eidgaon Islamabad Union attack, this time to grab the land of a Hindu neighbourhood. A gang of radicals led by Mohammad Abdul, Manusher, and Roman launched an attack on the Hindu neighbourhood of Raozan Upazila in Chittagong. Reportedly, 10 Hindus were injured in this attack.

This pattern of attacking Hindus to capture their land has been recognized as “Land Jihad”. There has been another similar attack by Muslim gangs at Pangsaha Rajbari, Sunatala Upazila, Bogura district of Bangladesh. A mob led by Mohammad Amjad Hossen tried to drive away Hindu families from their homes to grab their land on April 29th 2021. The incident was covered by local media but no action has been taken by the administration as yet.

Two incidents of gang attacks on Hindu families were reported on May 1st alone. The first incident took place in Sylhet district, where an entire Hindu para (neighborhood) was targeted by Islamists to grab their land. The mayhem left 8 Hindus severely injured.

Attempts were made to grab Hindu shops as well. On April 29th, the owner of a medicine shop, Utpol Mazumdar was brutally battered by some miscreants. The incident occurred in Laxmipur, Chittagong, with disturbing visuals of the same going viral on social media.

Another gang of radical Muslims attacked a Hindu family in Chamta Nadia P.S., Shariyatpur district. They sexually assaulted the women and left three members of the family injured, reports a Hindu activist from Bangladesh. Such random, unprovoked attacks continued through the entire length of the Muslim holy month.

On May 12th, Mohammad Nasir and Awal Islam, accompanied by 30-40 others and armed with sharp weapons pounced upon a Hindu family at Hizla Chitalmari, Bagerhat district. Again, women were sexually assaulted and other family members suffered serious injuries and were rushed to the Chitalmari Sadar hospital.

Most of these incidents of violence have gone unreported, or appeared as minor items in local media. Bharatiya and international media, with their indifference towards Hindu suffering, care even less about such targeted attacks against Hindus. These cases come to the surface only when some activists approach the victims and broadcast their pain out on social media.

With the condition of the Hindu Bengalis plummeting in Bangladesh, it has become imperative for  Bharat to implement the CAA at the earliest so that the persecuted Hindu Bengali refugees get citizenship rights. Again, given the post-poll violence unleashed on the Hindu Bengalis in West Bengal recently, and our nation’s inaction on it, we are faced with a more poignant question. If our government couldn’t save the Hindu Bengalis in Bharat, how far will it be able to protect the ones across the border?