Anti-racism protests break out all over Europe, Churchill statue defaced with “Was a Racist” slogan 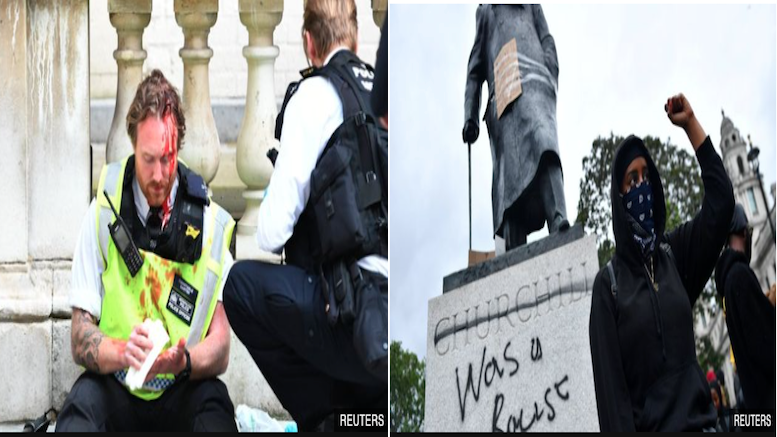 The anti-racism protests which broke out in US after George Floyd’s death under the knee of a white police officer have now spilled over into Europe, Australia and Asia as well. People took to the streets in the UK, Italy, Spain, Belgium, Denmark, Hungary, Australia, South Korea and Japan over the weekend, and just like in US there were some reports of violence from Europe too.

The sheer number of protestors meant social distancing norms at the time of the global Coronavirus pandemic went out the window.

The mayor of London posts this public health message with a straight face this morning having just approved and supported a mass gathering with zero social distancing going ahead yesterday.
What a jaw dropping joke. https://t.co/mN42cDGnJO pic.twitter.com/cSiGc5pEMI

The protests in London were ‘largely peaceful’ but marred by disturbances outside the British PM’s residence in Downing Street, reported the BBC. A total of 27 police officers were hurt. There were reports of bottles and smoke bombs being thrown at police. 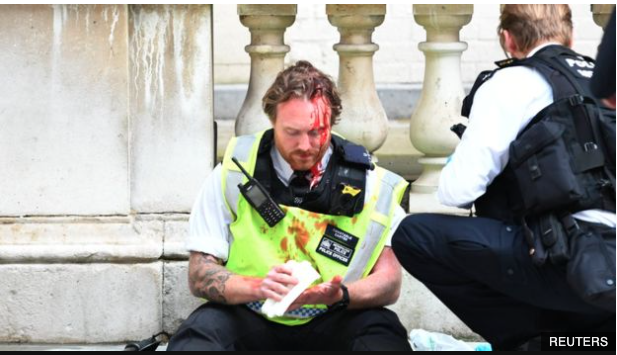 UK’s Met Police Commissioner said the attacks were “shocking and completely unacceptable”. But protestors said officers were “acting very aggressively” at places other than Downing Street too.

UK PM Boris Johnson tweeted that the protests had been “subverted by thuggery”.

In France, George Floyd’s death reignited anger over the death of Adama Traoré, a black man who died in police custody four years ago. Last week, thousands of French protesters defied a coronavirus-related ban on large gatherings and there were reports of at least two fires breaking out and tear gas being fired.

The BBC’s down-playing of the violence reflected the usual left-liberal spin on such matters. The same approach was on display even during the anti-CAA riots and violence in Bharat which left-liberal newspapers like Indian Express and Congress ecosystem intellectuals like Ramchandra Guha termed “largely peaceful”.

No, “Black Lives Matter” is not the global version of “Anti-CAA” protests

But that is about the only similarity between the anti-racism ‘Black Lives Matters’ and anti-CAA protests. The CAA is a law that expedites Bharatiya citizenship for the most persecuted refugees on the face of the earth – Hindus & other minorities from Pakistan, Bangladesh and  Afghanistan. The anti-CAA protests were driven by the rage of left-liberal and Islamist supremacists over Hindu persecution being officially recognised, and their veto power on Bharat’s policy making being dented.

Just within the Bharatiya sub-continent, Muslims have 3 countries with Islam as the state religion where Hindus face institutional & social persecution leading to a precipitous fall in their population, whereas there is not a single Hindu country in the entire world. Hindus have been invaded, pillaged and ruled by genocidal, colonizing forces – Muslim and Christian – for much of the last 1000 years.

The history of Blacks in the Western world is diametrically opposite. Slave trade and colonialism by European nations has ravaged all parts of the world, but none more so than Africa. The violent subjugation of Black civil rights in USA might have ended 50 years ago, but the implicit racism in Western systems of governance are all too real even today.

In UK’s Bristol, the statue of a prominent slave trader has been pulled down during the current protests. Protesters used ropes to pull down the bronze statue of Edward Colston, a 17th Century slave trader, who was a member of the Royal African Company which transported about 80,000 men, women and children from Africa to the Americas.

In London’s Parliament Square, the statue of ex-PM Winston Churchill was sprayed with graffiti crossing out his name with the words “Was a Racist” emblazoned below. While Churchill is celebrated as a hero in UK for leading the country to victory in WW-2, he has a chequered past to say the least. For British colonial subjects, he remains an abiding symbol of racist Western imperialist tyranny. He had once alluded to Hindus as “I hate Indians, they are a beastly people with a beastly religion.” On the subject of suppressing a rebellion against British colonial rule, he said, “I am strongly in favour of using gas against uncivilised tribes, it would spread a lively terror.”

In 1943, Churchill engineered one of the worst famines in human history by hoarding grain grown by Bharat and refusing to provide it to the country’s own starving citizens – 3 million perished in Bengal while Churchill sneered, “the famine was their own fault for breeding like rabbits.”

In Belgium various colonial-era icons have been vandalized in protest, especially statues of former King Leopold II, known for his reign of terror in the Congo in the 19th century. While some statues of him were defaced, others were set on fire or covered in paint and marked with messages saying “I can’t breathe,” the final words of George Floyd.