I hate Indians, they are a beastly people with a beastly religion: Winston Churchill 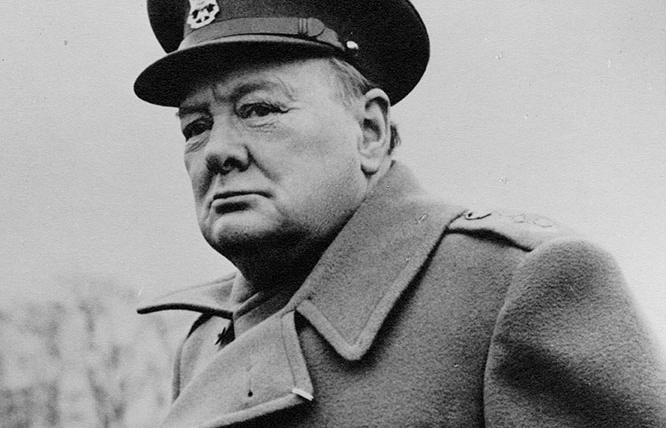 The story that British schoolbooks tell children about Churchill is of a British Bulldog, with unprecedented moral bravery and patriotism. He, who defeated the Nazis during World War II and spread civilization to indigenous people from all corners of the globe. Historically, nothing could be further from the truth.

To the vast majority of the world, where the sun once never set on the British empire, Winston Churchill remains a great symbol of racist Western imperialist tyranny, who stood on the wrong side of history.

The myth of Churchill is Britain’s greatest propaganda tool because it rewrites Churchill’s true history in order to whitewash Britain’s past imperialist crimes against humanity. The Churchill myth also perpetuates Britain’s ongoing neo-colonial and neo-liberal policies, that still, to this day, hurt the very people around the world that Churchill was alleged to have helped civilize.

The same man whose image is polished and placed on British mantelpieces as a symbol of all that is Great about Britain was an unapologetic racist and white supremacist. “I hate Indians, they are beastly people with a beastly religion”, he once bellowed. As Churchill put it, Palestinians were simply “barbaric hordes who ate little but camel dung.”

In 1937, he told the Palestine Royal Commission:

It is unsurprising that when Barack Obama became President, he returned to Britain a bust of Churchill which he found on his desk in the Oval office. According to historian Johann Hari, ‘Mr. Obama’s Kenyan grandfather, Hussein Onyango Obama, was imprisoned without trial for two years and was tortured on Churchill’s watch, for daring to resist Churchill’s empire’.

Apart from being an unrepentant racist, Churchill was also a staunch proponent of the use of ‘terrorism as a weapon of war’.

During the Kurdish rebellion against the British dictatorship in 1920, Churchill remarked that he simply did not understand the “squeamishness” surrounding the use of gas by civilized Great Britain as a weapon of terror. “I am strongly in favour of using gas against uncivilised tribes, it would spread a lively terror,” he remarked.

In the same year, as Secretary of State for War, Churchill sent the infamous Black and Tans to Ireland to fight the IRA. The group became known for vicious terrorist attacks on civilians which Churchill condoned and encouraged.

While today Britons celebrate Churchill’s legacy, much of the world outside the West mourns the legacy of a man who insisted that it was the solemn duty of Great Britain to invade and loot foreign lands because in Churchill’s own words Britain’s “Aryan stock is bound to triumph”.

Churchill’s legacy in the Far East, Middle East, South Asia and Africa is certainly not one of an affable British Lionheart, intent on spreading civilization amongst the natives of the world. To people of these regions the imperialism, racism, and fascism of a man like Winston Churchill can be blamed for much of the world’s ongoing conflicts and instability.

As Churchill himself boasted, he “created Jordan with a stroke of a pen one Sunday afternoon,” thereby placing many Jordanians under the brutal thumb of a throne less Hashemite prince, Abdullah. Historian Michael R. Burch recalls how the huge zigzag in Jordan’s eastern border with Saudi Arabia has been called “Winston’s Hiccup” or “Churchill’s Sneeze” because Churchill carelessly drew the expansive boundary after a generous lunch.

Churchill also invented Iraq. After giving Jordan to Prince Abdullah, Churchill, the great believer in democracy that he was, gave Prince Abdullah’s brother Faisal an arbitrary patch of desert that became Iraq. Faisal and Abdullah were war buddies of Churchill’s friend T. E. Lawrence, the famous “Lawrence of Arabia”.

Much like the clumsy actions in Iraq of today’s great Empire, Churchill’s imperial foreign policy caused decades of instability in Iraq by arbitrarily locking together three warring ethnic groups that have been bleeding heavily ever since. In Iraq, Churchill bundled together the three Ottoman vilayets of Basra that was predominantly Shiite, Baghdad that was Sunni, and Mosul that was mainly Kurd.

Winston Churchill convened the 1912 Conference in Cairo to determine the boundaries of the British Middle Eastern mandate and T.E. Lawrence was the most influential delegate. Churchill did not invite a single Arab to the conference, which is shocking but hardly surprising since in his memoirs Churchill said that ‘he never consulted the Arabs about his plans for them’.

The arbitrary lines drawn in Middle Eastern sand by Churchillian imperialism were never going to withstand the test of time. To this day, Churchill’s actions have denied Jordanians, Iraqis, Kurds and Palestinians anything resembling true democracy and national stability.

The intractable Israeli-Palestinian conflict can also be traced directly back to Churchill’s door at number 10 Downing Street and his decision to hand over the “Promised Land” to both Arabs and Jews. Churchill gave practical effect to the Balfour declaration of 1917, which expressed Britain’s support for the creation of a Jewish homeland, resulting in the biggest single error of British foreign policy in the Middle East.

Churchill’s legacy in Sub-Saharan Africa and Kenya in particular is also one of deep physical and physiological scars that endure to this day.

Of greater consequence to truth and history should be a man’s actions, not merely his words. Whilst Churchill has become one of the most extensively quoted men in the English speaking world, particularly on issues of democracy and freedom, true history speaks of a man whose actions revolved around, in Churchill’s own words, “a lot of jolly little wars against barbarous peoples”.

One such war was when Kikuyu Kenyans rebelled for their freedom only to have Churchill call them “brutish savage children” and force 150,000 of them into “Britain’s Gulag”.

Pulitzer-prize winning historian, Professor Caroline Elkins, highlights Churchill’s many crimes in Kenya in her book Britain’s Gulag: The Brutal End of Empire in Kenya. Professor Elkins explains how Churchill’s soldiers “whipped, shot, burned, and mutilated Mau Mau suspects”, all in the name of British “civilization”. It is said that President Obama’s grandfather Hussein Onyango Obama never truly recovered from the torture he endured from Churchill’s men.

The Nobel Prize-winning economist Amartya Sen has proved how in Bengal in 1943 Churchill engineered one of the worst famines in human history for profit.

Over three million civilians starved to death whilst Churchill refused to send food aid to Bharat. Instead, Churchill trumpeted that “the famine was their own fault for breeding like rabbits.” Churchill intentionally hoarded grain to sell for profit on the open market after the Second World War instead of diverting it to starving inhabitants of a nation controlled by Britain. Churchill’s actions in Bharat unquestionably constituted a crime against humanity.

Churchill was also one of the greatest advocates of Britain’s disastrous divide-and-rule foreign policy. Churchill’s administration deliberately created and exacerbated sectarian fissures within Bharat’s independence movement, between Bharatiya Hindus and Muslims that have had devastating effects on the region ever since.

Prior to Bharat’s independence from Britain, Churchill was eager to see bloodshed erupt in Bharat, so as to prove that Britain was the benevolent “glue holding the nation together”. For Churchill, bloodshed also had the added strategic advantage that it would also lead to the partition of Bharat and Pakistan. Churchill’s hope was this partition would result in Pakistan remaining within Britain’s sphere of influence. This, in turn, would enable the Great Game against the Soviet empire to continue, no matter the cost to innocent Bharatiyas and Pakistanis. The partition of Bharat with Pakistan caused the death of about 2.5 million people and displaced some 12.5 million others.

According to writer, Ishaan Tharoor, Churchill’s own Secretary of State for Bharat, Leopold Amery,  compared his boss’s understanding of Bharat’s problems to King George III’s apathy for the Americas. In his private diaries Amery vented that “on the subject of India, Churchill is not quite sane” and that he didn’t “see much difference between Churchill’s outlook and Hitler’s.”

Churchill shared far more ideologically in common with Hitler than most British historians care to admit. For instance, Churchill was a keen supporter of eugenics, something he shared in common with Germany’s Nazi leadership, who were estimated to have killed 200,000 disabled people and forcibly sterilised twice that number. Churchill drafted a highly controversial piece of legislation, which mandated that the mentally ill be forcibly sterilized. In a memo to the Prime Minister in 1910, Winston Churchill cautioned, “the multiplication of the feeble-minded is a very terrible danger to the race”. He also helped organize the International Eugenics Conference of 1912, which was the largest meeting of proponents of eugenics in history.

Churchill had a long standing belief in racial hierarchies and eugenics. In Churchill’s view, white protestant Christians were at the very top of the pyramid, above white Catholics, while Jews and Bharatiyas were only slightly higher than Africans.

Historian, Mr. Hari, rightfully points out, “the fact that we now live in a world where a free and independent Bharat is a superpower eclipsing Britain, and a grandson of the Kikuyu ‘savages’ is the most powerful man in the world, is a repudiation of Churchill at his ugliest – and a sweet, ironic victory for Churchill at his best.”

Amid today’s Churchillian parades and celebratory speeches, British media and schoolbooks may choose to only remember Churchill’s opposition to dictatorship in Europe, but the rest of the world cannot choose to forget Churchill’s imposition of dictatorship on darker skinned people outside of Europe. Far from being the Lionheart of Britain, who stood on the ramparts of civilisation, Winston Churchill, all too often, simply stood on the wrong side of history.

Churchill is indeed the Greatest Briton to have ever lived, because for decades, the myth of Churchill has served as Britain’s greatest propaganda tool to bolster national white pride and glorify British imperial culture.

Garikai Chengu is a scholar at Harvard University. Contact him on [email protected]. The original source of this article is Global Research. We are grateful to the author for giving consent for reproducing  this article on HinduPost.

Copyright © Garikai Chengu, Global Research, 2016
(This article represents the opinions of the Author, and the Author is responsible for ensuring the factual veracity of the content. HinduPost will not be responsible for the accuracy, completeness, suitability, or validity of any information, contained herein.)
Liked It?
Support Hindupost
Share
Facebook
Twitter
WhatsApp
ReddIt
Telegram
Print