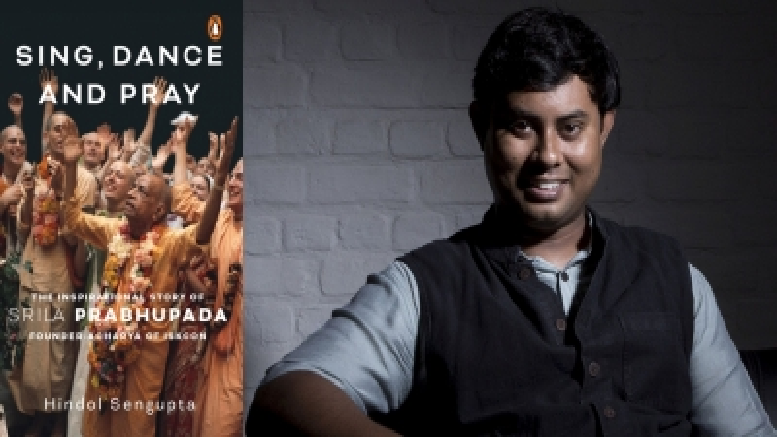 In a short span of 12 years from the time he set foot in New York City on September 17, 1965 to his demise on November 14, 1977 in Vridanvan aged 81, A.C. Bhaktivedanta Swami Srila Prabhupada had seen ISKCON (International Society for Krishna Consciousness), colloquially known as the “Hare Krishna Movement” grow into a global confederation of more than 100 temples, ashrams and cultural centres on his mission to introduce the ancient teachings of Vedic India to the world at large.

“He did not arrive in America looking to be a guru. He came, primarily, to share Vedic knowledge through distribution of his books. He had hoped that someone would listen; he was, in fact, wary of becoming a guru,” award-winning author Hindol Sengupta writes in ‘Sing, Dance and Pray – The Inspirational Story of Srila Prabhupada’ (Penguin/Ananda) that charts the journey of Abhay Charan De from his birth on September 1, 1896 in Calcutta to becoming Swami Bhaktivedanta and then to Srila Prabhupada.

“But he did become a guru – to some of the most unlikely people. From his efforts at building a movement in India – which failed – Srila Prabhupada had drawn the lesson of not depending too much on the Indian community in the West but to reaching out instead to Westerners, Americans, the British, French and Germans, to teach them,” Sengupta writes, adding: “In this, he succeeded more effectively than his wildest dreams.”

He worked to create a band of disciples and an organisation where his followers could think for themselves, and be free to take their own decisions within broad boundaries. “In this, he succeeded only partly as till the very end, he had to keep reminding his disciples that it was up to them to maintain the sanctity of ISKCON, and ensure that it stood for the right values and was able to operate without rifts,” the book states.

Till the end, ISKCON needed his guidance in many ways and through this process, he was able to achieve things that once seemed impossible that they were magical – being able to procure land in Mayapur, Bombay and Vrindavan, being able to build his own temples, of the kind that he wanted, in the heartland of Vaishnavas.

“Even though he urged his disciples again and again to learn how to work, it was his own interventions and handholding at every step – whether it was to win legal battles or ensure that work was completed on time – that finally created the series of pivotal temples for ISKCON,” Sengupta writes.

Srila Prabhupada was prescient enough to understand that while his movement had succeeded in a manner which he could have scarcely imagined a decade ago, the swiftness of his success meant that even the oldest disciples of ISKCON were but very new to Vaishnava life, they were, in his oft-used word ‘neophytes’. This remained one his worries till the end.

“But Srila Prabhupada was able to detach his own spiritual journey and message from even the boundaries of the physical movement that he gave birth to. Therein lies evidence of his spiritual strength,” Sengupta writes, adding as he led ISKCON, “he kept on the process of detaching himself from the splendour and clamour of his movement”.

In more than one way, the book says, Srila Prabhupada’s life “should be considered above and beyond the legacy and history” of ISKCON.

This is because he “was the most influential Vaishnava spiritual leader to emerge in the twentieth century; the scale of his influence in the Western world can be considered more expansive than that of Swami Vivekananda in promoting Hinduism around the world, even though the ISKCON movement does not yet have a history as long as Vivekananda’s Ramakrishna Mission”, the author maintains.

Noting that “life in the world and life in the spirit have often been construed as opposing forces, as indeed they are”, Sengupta writes that Srila Prabhupada’s life “shows the possibilities for spiritual redemption even after, or along with, the fulfilment of familial life, a path for sannyasa for the ordinary man”.

Srila Prabhupada’s journey, the book maintains, “is not that of the precocious or the child prodigy, but it is the dogged, earnest path of the earnest believer whose faith lifts him to extraordinary heights. Thus, Prahupada speaks to us not from the pedestal – though that is where he really belonged and his life finally took him – but from amidst and jostle and noise of the crowd”.

“Through the jostle of building and running a global movement, Srila Prabhupada recognised that as important as the logistics was to advance the cause of Krishna consciousness, the bigger it became, the more time and energy it could take up, which might, ironically, distract from the path of seeking the divine.

“This recognition that is the underlying theme of his life is perhaps his greatest message – to serve the Supreme Godhead Krishna without a tinge of selfishness and to build with attachment to Lord Krishna an organisation to exclusively serve His mission.