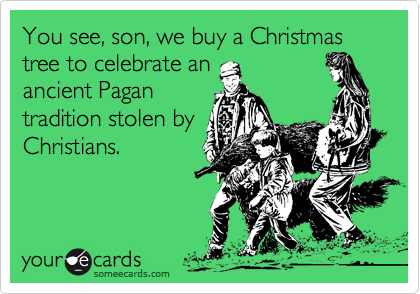 Christmas has today become a universal phenomenon – widely celebrated in many countries across the world. Even in a Hindu-majority country like Bharat, there has been an exponential rise in Christmas celebrations, at least its commercial elements – street vendors selling Santa Claus caps, masks and other decoration paraphernalia is a common sight in most cities of Bharat. Many private Hindu-run schools are also celebrating the festival through Carnivals, contests and special assemblies. The scene is similar in many residential societies and corporate offices as well.

As Christmas mania sweeps across, it is hard for the discerning Hindu not to note the positive associations with Christmas, while major Hindu festivals like Diwali, Holi, Ganesh Chaturthi and Dahi Handi are increasingly under fire in Bharat & attacked on one pretext or the other.

While Christmas has penetrated even tier-2 cities and small towns of Bharat, Hindu festivals like Diwali hardly register in Christian majority countries of the West – you can banish the thought of an elementary school in South USA (also known as the ‘Bible Belt‘) even acknowledging Diwali, leave alone celebrating it!

Even more worryingly, many convent/missionary schools in Bharat show no reciprocity to the open-mindedness displayed by private Hindu-run schools in celebrating Christmas – Hindu festivals are either ignored or subtly denigrated in these convents and children harshly persecuted for any signs of Hindu rituals/celebrations. For eg., a child in LKG was recently expelled from a Christian school in Bengaluru for sporting a ‘shikha’; this blog by @realitycheckind captures the harsh reality of the injustices faced by Hindu students who dared to express their Hindu identity in a Christian school – from being made to stand in the sun and forced to rub mehandi from their hands, to being fined for lighting diyas during Diwali.

So while it is very easy to smear a Hindu who talks about resisting the Christmas wave and respectfully declines to partake in the celebrations, as a ‘bigot’ – the reality is that Hindus festivals and rituals are not accorded even a fraction of the respect that we instinctively accord to others.

But do Hindus really care about the obvious double standards and lack of mutual respect at play in Hindu-Christian relations?

This write up ‘Christmas Enthusiasm Among Hindus‘, where the writer carried out a social experiment to gauge the mindset of the urban Hindu towards Christmas offers a fascinating glimpse into how the Hindu mindset has been sub-consciously influenced over centuries. He summarizes his key learnings from this experiment as below –

Generalizing…Hindu community is not ready to defend their heritage in the current times of globalization! Yes, we are way behind the competition in terms of organizing ourselves and we have a long way to go. While this is not a pleasant thought, in past few years, I’m seeing an undercurrent of Dharmic people waking up and taking stock of the situation. I’m lucky to know some of the thought leaders in the field of comparative religion. Shri Rajiv Malhotra (www.rajivmalhotra.com) is my favorite and most of the analysis in this article is based on the knowledge I’ve acquired working with him. Anyone who has genuine interest in the subject of comparative religions must read his book “Being Different,” a summary of which is available on Rajiv Malhotra’s website.”

It is abundantly clear to anyone who has managed to take of the lens of ‘colonial consciousness’ that Hindus have been taken for a ride – while we have been indoctrinated to believe that Hinduism is a deeply flawed religion and that Bharat’s ‘secularism’ is contingent on Hindu tolerance (to the point of self-denial)…the Abrahamic camp instills a feeling of superiority in their children, preaches that their’s is the ONLY TRUE WAY to eternal salvation and actively promotes a persecution complex in their flock.

Appropriation and Digestion of Indigenous Cultures by Christianity

As Christianity spread from its origins in the deserts of Judea to Europe and then the rest of the world, it consistently obliterated indigenous cultures and civilizations through a process of outright genocide or gradual appropriation and digestion. Christmas was originally a pagan festival that was gradually taken over by the proselytizing Christians to win over new converts.

Pagan comes from the Latin word paganus, which means “country dweller”. As Christianity spread through the Roman Empire, it spread more rapidly in the cities than in the countryside. Thus the people living in the country (villages) were the last to be reached by the new religion and hence most likely to be unbelievers. In addition to heathen, infidel and heretic, pagan was used as one of several pejorative Christian counterparts to gentile as used in Judaism, and to kafir (‘unbeliever’) and mushrik (‘idolater’) as in Islam.

Early Christianity developed in the Roman Empire, where many religions were practiced that are, for lack of a better term, labeled paganism. As this fundamentalist Christian doctor writes –

“The Christianization of Pagan holidays began about the fourth century A.D. when the Roman Emperor Constantine, became (or feigned becoming) a Christian. In order to consolidate his rule, he incorporated the Pagan holidays and festivals into the church ritual – attracting the Pagans, but he gave the holidays and festivals new “Christian” names and identities – thus appeasing the Christians.”

There is a lot of compelling evidence which shows that Jesus Christ was not born on December 25. In fact, historically, all Christian churches celebrated Christ’s birth on January 6th until the fourth century. According to Roman Catholic sources, the date was changed from January 6th to December 25th in order to override a pagan feast dedicated to the birth of the Sun (winter solstice) which was celebrated on December 25th. Armenian Christians have continued to celebrate Christmas on January 6th until today.

Here is another article which talks about how pagan festivities were appropriated as Europeans converted to Christianity.

“Shocking as it sounds, followers of Jesus Christ in both America and England helped pass laws making it illegal to observe Christmas, believing it was an insult to God to honor a day associated with ancient paganism,” according to “Shocked by the Bible” (Thomas Nelson Inc, 2008). “Most Americans today are unaware that Christmas was banned in Boston from 1659 to 1681.”

All Christmas activities, including dancing, seasonal plays, games, singing carols, cheerful celebration and especially drinking were banned by the Puritan-dominated Parliament of England in 1644, with the Puritans of New England (North East of USA) following suit. In England, the ban on the holiday was lifted in 1660, when Charles II took over the throne. However, the Puritan presence remained in New England and Christmas did not become a legal holiday there until 1856.”

Christianity’s extermination of Paganism has important lessons for Hindus, as this article by Koenraad Elst argues. Christian missionaries have adopted multi-pronged strategy to spread their faith, including elements of coercion (force) and subversion (overthrowing from within). Christian strategic acumen built over 2000 years of infiltrating and exterminating several indigenous cultures has given them a sophisticated set of mission tools. One such tool is inculturation.

Inculturation is the adaptation of Christian liturgy (public religious worship) to a non-Christian cultural background. The use of Saffron robes, Rudraksahmala, Jesus Sahasranama, Jesus Namavali, Jesus Devasthanam etc. are some examples of Christian inculturation of Hindu practises & traditions.

The man who laid the foundation of inculturation was the Italian priest Robert de Nobili (1577-1656). He learnt Sanskrit and Tamil, wore saffron robes, sacred thread (a small Cross attached to it!) and sandal mark on forehead and called himself a ‘Roman Brahmin’. He set up an “Ashram” in Madurai, became a vegetarian and wore “Pathukas” (wooden footwear). He claimed the Bible was the “Lost Veda”, the “Jesuit Veda” revealed by God, and was considerably successful in harvesting souls 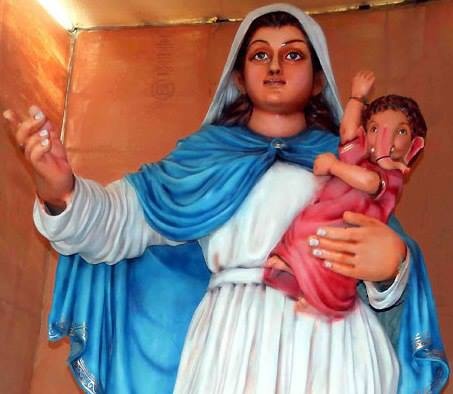 Given this history and seeing the current upsurge in missionary aggression vis a vis Bharat, it is possible that 100 years from now, Diwali might be celebrated as Christavali or Thomasavali – in celebration of the ‘arrival’ of Thomas the Apostle to Bharat in 52 CE – a debunked myth that is still considered as historical fact by many Indian Christians. And there will be full license to burst crackers if such a subversion does indeed take place!

Hindus have a right to assert their religion, culture, civilization and way of life. Whatever be the ills that have crept into our religious and social practises with time, the core of Hindu Dharma is pure gold which illuminates all of humanity and must be preserved. We have no reason to be self-defeating in the competitive marketplace of religions.

Dharmics must demand mutual respect, not just tolerance, from Christians. We must realize that we are up against a powerful and sophisticated adversary that enjoys an advantage, in terms of both hard & soft power, over us. Hence we must also be wary of bowing to the commercial hype around Christmas and celebrating it as just another festival. The effects on young minds must not be under-estimated. While children are nowadays bombarded with negative messages by their teachers (often Hindu!) on Hindu festivals (do not burst crackers, do not waste water etc), Christmas is presented as a fun-time for eating cake and receiving gifts.

We just remember what ex-Christians like Koenraad Elst have to say – “..Christianity’s self-righteousness due to a belief in being the sole possessors of the truth, and the consequent contempt for non-Christians, a far more negative attitude than anything the Pagans could muster; or in other words, the unmatched power of hatred; as well as the consequent importance they attach to religious identity, which means the pressure to convert in a mixed marriage is usually on the Pagan partner..”

Refusing to celebrate Christmas or demanding reciprocity from Christians does not make one a bigot. It is not intolerance, but self-awareness. Be aware of your own Dharmic roots and the complex issues at play, before deciding your response to the Christmas mania, especially with regards to children –

Take 2 minutes to think about how your grandparent’s generation viewed Christmas. It will tell you all you need to know about what the distorted ideas of secularism, modernity and liberalism have done to the Hindu psyche in just the last few decades.