Are Missionary Schools Pressurizing Teachers & Students To Convert To Christianity? 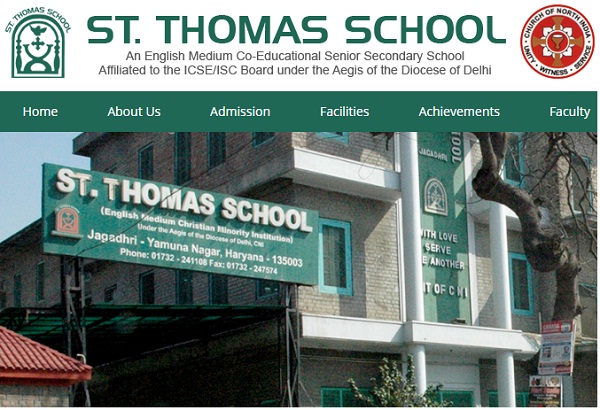 A recent report in a Hindi news magazine has mentioned that parents of some children studying at St. Thomas school in Jagadhri, Haryana have alleged that this Christian school has told the students to convert to Christianity for fee waiver. The news also mentions that all students (including non-Christians) are also made to say prayers to Jesus 4 times a day. The school is a unit of CNI (Church of North India) and is affiliated to ICSE /ISC Board under the aegis of the Diocese of Delhi.

We could get a partial clip of the Hindi news that was published in this regard, and there doesn’t seem to be any English media report on this news :

Jagadhri is an average size town in Yamunanagar district of Haryana. As per the 2011 Census of Bharat, the town had 26,716 households with a total population of 124,894. The school has 4,000 plus enrolled students which makes it one of the bigger / known educational institutions of the town, decisions of which must be affecting overall education scenario of the area.

The school has been facing protests of parents for frequent fee hikes in recent past. One such protest happened in July 2016. Quoting a Hindi news report:

Translating the above into English :

“Earning of people hasn’t increased as much as the increase in school fee. They did not seek suggestions from the parents before deciding on fee increase. Parents have accused that on one hand management claims to be a minority insitution, and on the other they are taking Rs. 5000 to 6000 as monthly fee from each student, whereas as per the rules the school fee should not be above Rs. 1000 to 1500 every month. Parents have said that the school is charging electricity bill from the students in addition to monthly fee, whereas there is no proper generator facility in the school. Fans do not work once electricity is out and small kids suffer in heat. Apart from these, children are made to pay computer fee, science fund, examination fee separately which is wrong.

They have said that parents filed an RTI application against the school which has brought to light the fact that school account has more than a crore of rupees as advance. If school has so much money already deposited in its account, there is no reason to increase the fee”.

As per another Hindi news report that talks about results of RTI application filed by parents – the fee per child has increased about 3 times in last 5 years (2011-12 = 2355, 2015-16 = 6120) which is very high for a small town like Jagadhri. It seems that the education department has also asked for clarification from the school on expenses shown in their Balance Sheet which have become public because of RTI application.  1400 parents had sought clarifications from the school in a written application. Quoting this news report :

Translating the same into English :

– The school has shown an expenditure of 63.99 lakhs on legal processes; parents are asking for the details of the case which is costing so much. They are asking why parents should bear this legal cost?“

The school account seems to have more than 2 crore rupees in ‘Advance Fees’ and bank deposit.

English translation of the same :

“District Education Officer Uday Pratap has said that many complaints were received against St. Thomas School based on which the school was asked to furnish the details of income and expenditure. At first the school did not provide the details of income and expenditure of period ending 31st Dec 2015, but after strictness from education department, the school arranged for the same. As per the balance sheet given to us, the school has been asked to explain certain expenditures through a notice. In their reply, they haven’t provided the justification for these expenditures, and fee hike has been mentioned as a special right of the school management.“

Hindupost tried to call up the school several times, but as soon as they got to know we were inquiring about fee hike, the person on the other end pretended as if the line was bad.  Another number provided by the school on their website has constantly been unreachable, and the website does not open any link beyond the home page. We finally called the parent body, CNI (Church on North India) Bhavan in Delhi, where we were told that only school can give appropriate reply and we were redirected to them. It is clear that the school is unwilling to speak on anything related to fee hike and the associated charge of inducing religious conversion to obtain fee waiver.

What is happening in St. Thomas School, Jagadhri is extremely troubling. The parents’ charge that the school is indulging in immoral tactics to induce vulnerable children to convert is further strengthened, when one considers another report that HinduPost has received from a family member of an ex-teacher of a posh South Delhi Christian convent school. On condition of anonymity, the person wrote to us about the immense pressure this teacher faced to fulfill religious conversion targets, forcing her to eventually quit the job. We are reproducing this letter verbatim below:

“I am sharing experience of my family member who joined School X, some years back as a teacher and left within short period of time, as she couldn’t cope with the pressure of not only converting students but also on her to embrace Christianity.

Below are some of the points she mentioned during our informal conversation, on how it has become a norm in India for these Christian schools and missionaries to convert to access funds from foreign agencies and spread Christianity.

Right from the beginning of her job, she was asked to read bible to quote to students about Jesus only, as all others Gods in India are based on myths, which she could not comprehend but took it in as she was new.

In discussions with other non-christian staff, she came to know that Mr W (the principal), once broke the jaw of a Hindu student (1994-95) who replied back on his jibe on Hindu Gods, that matter didn’t get reported to police as student’s parents were threatened to terminate their son from school.

On her first review, she was lectured by the principal that she has not been able to convert any student in her class and school would not be able to get enough funds from society for conversion, and she should try to convert double as she didn’t perform during her first / initial period.

While discussing her review with her class head, she was advised to convert herself asap, otherwise it would be very difficult for her to continue with job after being in eyes of Mr W (the principal). At this point she started looking for another job.

According to her, its quite common for Mr W (the principal) to come into the class and hold one of student’s palm and ask him ‘Can You See Jesus In Your Palm?’ which most students end up saying yes, even Special Education Needs (SEN) ones or partially blind too!!

By listening to her one thing is clear – that these organisations are working with modus operandi to disintegrate India on the line of religious harmony for sure.

It may be one of the stories you have been hearing from many, but this is happening right in Delhi in posh suburbs, imagine in poor states of India what they have been doing for decades.”

We tried to convince the person to let us speak to the teacher herself, but she was unwilling to reveal her identity and speak to us fearing a backlash from the Christian lobby & due to fears that her career would be impacted.

If all this is indeed true, it calls for a huge alarm in Bharat’s polity. The fact that English media is usually apathetic towards reporting this kind of news, hints that powerful elements in media are actually in favor of this business of religious conversion. This also calls for a strict vigilance on minority schools and putting them in the same ambit of monitoring, or even higher, than private Hindu run and government schools.

(We thank @vvaayu for speaking to us and proving information).