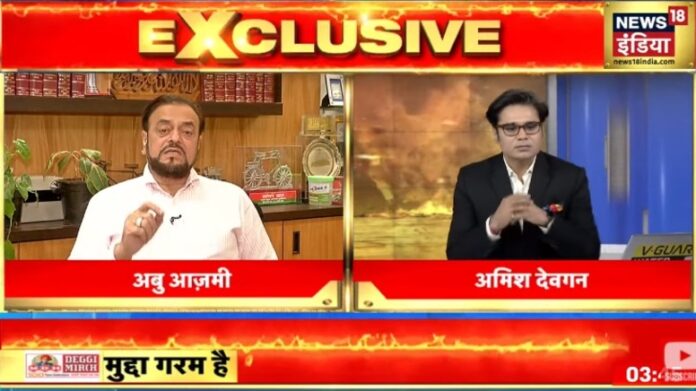 On Friday, Samajwadi Party leader Abu Azmi triggered a major controversy after suggesting that if left alone with his daughter or sister, a man can end up raping them. The highly contentious and obnoxious remarks were made by the senior politician during a conversation with News 18’s anchor Amish Devgan where the duo was debating the recent decision to increase marriageable age of women to 21.

After the Union Cabinet gave a go-ahead to the decision, many commentators have expressed objection to it and presented some valid reasons. However, this reasoning brought by Azmi to oppose the move is beyond bizarre.

When the journalist questioned him on why was he opposed to the new proposal, Azmi stated, “According to our culture when girls or children grow up and become adults, they should be immediately married. If you are unable to find a suitable match, then wait patiently for the same. But after finding a suitable match do not keep delaying their marriage.”

He further added, “If you delay the marriage even after finding a suitable match it will not be right. If these children indulge in any sinful behaviour then the parents will be held responsible for that sin.”

His claims prompted Amish to ask him if he doesn’t have trust in women. The Samajwadi Party senior explained, “No, it is not like that. They are certainly trustworthy. I also have a daughter. I am not concerned about trust here.”

He then suggested that men may end up raping their daughters or sisters if they are left at home alone with them. “If my girl/daughter or sister is alone at home, then, my culture tells me to not stay alone with them. The Satan (Devil) might take over your spirits….we have been witnessing many cases of rape committed by cousin brothers and fathers…this is what our ancestors have told us,” he explained.

He also tried to support his ‘analysis’ by stating, “Meddling in the rules of Ishwar and Allah results in a disbalance in the society.”

Apart from a daughter named Rushda, 66-year-old Abu Azmi has a son Farhan Azmi who is married to former Bollywood actress Ayesha Takia; Farhan was 27 and Ayesha was 23 when they tied the knot in 2009. Rushda got married in 2008, and from the wedding photos, she also looks well above 18.

His comments about staying alone at home with daughters and sisters make us wonder if it is safe for him to stay at home alone with his beautiful daughter-in-law lest the “Shaitan possess him” and lead to sinful activities?

It must be highlighted that this is not the first time Abu Azmi has made bizarre remarks on women or sexual violence. He has advocated women who are raped also being punished, as per the laws of Islam.

In 2014, Samajwadi supremo Mulayam Singh Yadav had spoken against rapists getting the death penalty, saying “boys will be boys..they can make mistakes.” When Mid-Day newspaper spoke to Azmi on this issue, he said, “Rape is punishable by hanging in Islam. But here, nothing happens to women, only to men. Even the woman is guilty….Any woman if, whether married or unmarried, goes along with a man, with or without her consent, should be hanged. Both should be hanged. It shouldn’t be allowed even if a woman goes by consent.”

In 2017, when mass molestation and abuse of women revelers celebrating New Year’s eve at MG Road, Bengaluru – an area with sizeable Muslim presence – was reported on the night of December 31, Azmi had made a series of shocking comments like comparing women to sugar and molesters to ants; or saying a woman should go out after dark only with her husband or father.

And it seems the apple hasn’t fallen far from the tree. When Bollywood actress and model Esha Gupta hit back at Abu Azmi for his comments, Farhan Azmi compared her to a prostitute. Incidentally, in 2003, Farhan Azmi was arrested in Dubai on drug charges. Last year, the smooth-talking Azmi scion said he will ‘go to Ayodhya to construct Babri Masjid’.

Actually, Samajwadi Party leaders with misogynist and Islamist mindsets are a dime a dozen.

SP MP Shafiqur Rahman Barq has claimed that increasing marriageable age to 21 would give women an opportunity to indulge in ‘awargi’ (reckless, immoral behaviour). Barq was an MP with BSP when he had walked out of the parliament when the national song Vande Mataram was played. “Girls should be married when they attain the age of fertility”, said  SP MP ST Hasan. The AMU-educated MP Dr. ST Hasan had recently said that Covid-19, cyclones are divine punishment for ‘injustice to Muslims’.

Back in 2019, Samajwadi Party leader Azam Khan had attracted massive flak for his indecent remark about Jaya Prada. He had said that he had known in 17 days that her (Jaya Prada’s) underwear’s colour was khaki (a reference to RSS).