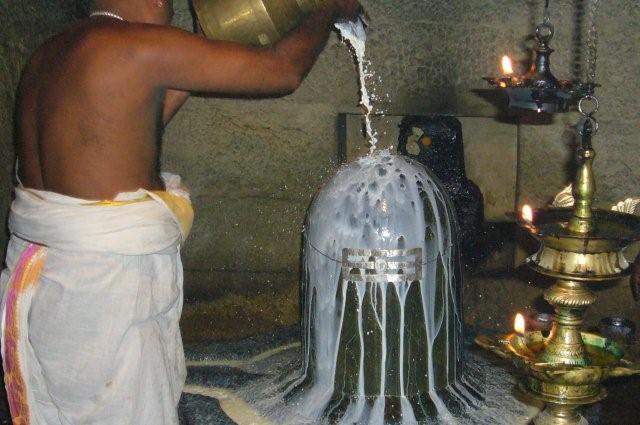 A video doing the rounds on Whatsapp shows an Acharya or Guru answering the question of a young girl who is brash in her questioning. There are thousands of people who have gathered for a Satsang and this girl gets up to question a ritual followed by Hindus – the ritual of offering milk to Bhagwan Shiva. She wants to know why this milk should not be donated to poor children instead, and why when we are following wrong practices, we object to them being showed in films like “P.K.”. She asks these questions in a very rebellious way, with scant regard to respect shown to Gurus or Acharyas. And she doesn’t sit down till her questions are answered. Her brother tries to interfere and finally tells the Guru that since he could not answer her questions, he had brought her to the Satsang to answer her queries because he was sure that Guruji would be able to do so.

What is interesting is the reaction of the Guru. At first he tries to brush the girl aside by telling her a shloka and asking her whether she knew why she was supposed to go to the temple. But when he sees that the girl has a earnestness about her, he answers her patiently. He explains how donating and worshiping are 2 different aspects of life completely. He also explains how Bhagwan Shiva does not need anything from us, it is us who offer something to Him as gratitude for everything that He has given us. Without getting angry, without stopping the girl from questioning ancient rituals, he answers her. He never mentions even once that questioning rituals would make her less of a Hindu.

This is the video :

This exactly is the difference between Hindu Dharma and other religions. The tenets of our religion are based on QUESTIONING itself. Unless we ‘see’ the truth, we do not accept it as the truth. There is no philosophy in the world which revered questioning as much as Hindu Dharma. In fact, all our Upanishads were verses which spoke the universal truth based on the wisdom of the sages. But these sages did not accept the verses which were revealed to them without discussing them with other Rishis too. Unless there were healthy debates or ‘Tark’, and all of them came to the same understanding and acceptance, these verses did not become part of the Upanishads. That is why questioning and then accepting has entered our psyche.

We are probably the only people in the world who think it is their right to question the religion and make changes in the rituals as we think fit. That is why we don’t have a fixed God, fixed day for praying, fixed place for praying, or anything similar to other organized religions. Also, we don’t have only one Guru, one fixed ritual for worshiping or how much we should donate, etc.

Those who could not philosophize further, accepted the Rishis and sages’ statements since they knew that their wisdom had the unshakeable foundation of questioning and then accepting the Truth. Even in the Bhagwad Gita, Sri Krishna – Bhagwan Himself, quotes in Verse 63 of Chapter 18 –

“Thus I have explained to you knowledge still more confidential. Deliberate on this fully, and then do what you wish to do.”

Is there any other religion which gives the Seeker/Believer this freedom?

One reflection on the above fact would make us understand why we have been able to try and get rid of so many problems that seeped into our religion over time for various reasons – like sati, dowry, casteism etc. Rituals which were not prevalent in Vedic Bharat had entered our society because of infiltration of different cultures through the invaders down the ages. We had forgotten ourselves and our questioning ways, our research, our philosophy.

In fact, with the advent of the British, we had even started accepting whatever they fed us with about our own selves. We accepted their statements about the Aryan Invasion theory, we accepted what they said about casteism as being what the Varna system was, that Aryans drove away the Dravidians, and whatever else they vomited about our great civilization. We started feeling small about our rituals, we got into this deep pit of inferiority and started believing that being Western was what would make us ‘Modern’. We started believing that our very scientific religion was actually one which was based on superstition. And now, this new generation is going back to the questioning phase. And we are welcoming it !!! That is the beauty of Hindu Dharma.

Hopefully, we will also go back to the discovering phase & start using our brains instead of blindly believing the nonsense that is thrown at us by some Western ‘Indologists’ and communist apologists.

And yes, the scientific reason why milk is poured on the Shivling during Shravan-maas:

Ever wonder why Bhagwan Shiva is always shown as indulging in items which ordinary people do not partake in as Prasad? When the churning of the Ocean (Sagar Manthan) took place, the first output of such churning was Halahal (poison). Mahadev swallowed it with ease and even survived. Why did MahaVishnu or Brahma or even Durga Maa not come to swallow the poison? In contrast Bhagwan Vishnu is always partaking in sweets and other tasty food which is then savoured as Prasad by all His Bhaktas. When Sagar Manthan took place and it was time for Amrit (Nectar), immediately Bhagwan Vishnu showed up in His Mohini Avataar. And even the leaf offered to Him is the very tasty Tulsi while Bhagwan Shiva is offered the very bitter Bilva Leaf.

During Shravan Maas (the month of Shravan, usually in August) people are seen worshiping Bhagwan Shiva with jug loads of milk poured over the Shiv Ling. While all this may seem bizarre and wasteful even, let us look at the logic behind all this.

Bhagwan Vishnu is considered to be Paalan Karta (the Preserver), the God who protects and looks after the whole universe. Bhagwan Shiva on the other hand, is considered to be the Destroyer. So the food offered to them also is according to the roles they play. The food offered to Lord Vishnu is food which is edible, nutritious and helps in making one healthy. That is why Tulsi, a medicinal plant is offered to Vishnu. That apart, seasonal fruits and sweets made of cereals and pulses are offered to Vishnu.

Bhagwan Shiva is usually offered food which is harmful to human beings. He indulges in all kinds of roots, seeds and leaves which are intoxicating and even poisonous. Hemp, which is intoxicating, is not to be used by humans, however tempting it may be. Datura seeds are poisonous and therefore are not consumed by humans. Bilva (Bel) leaves are so bitter to taste that usually one does not eat it.

In February, the time when Shiv Ratri is celebrated, Shiva is offered ‘Gajar Halwa’ (a sweetmeat made of Carrots). This is because the season of carrots is over by then and the carrots available then are hard at the centre and therefore are not as nutritious any more. During Shravan, the grass is new and when the cows graze on such grass, they consume the soil too (since the grass is too short & easily comes off from the roots). The milk thus contains more minerals than what the human body can digest and therefore during the month of Shravan, one is not supposed to drink more of milk.

Even on other days, Shiva is offered milk which has not been boiled. Today, we drink milk of cows grown in captivity and their feed is most likely not fresh grass and so maybe it would be alright to drink cow milk even in August. Another ritual followed is that during summer, water is poured over the Shivling through a copper vessel hung on top of the Shivling, while in winter, water is poured using a silver vessel. The reason here too is the same. One should consume food or water from a silver vessel (if possible) during summer and use copper vessels during winter. As per Ayurved, silver is cooling and copper heats up the body.

Our rituals have a very scientific base behind them. In olden days it was probably difficult to educate everybody about the usefulness of a crop or about fruit and berries which had to be avoided. Thus this ritual showed people as to which food could be consumed and which was to be avoided. If a devotee went to a Vishnu temple, automatically he would know about the grain, fruit or vegetable of the season. Similarly if he went to a Shivalaya, he would know which grain, berry or fruit to avoid for consumption.