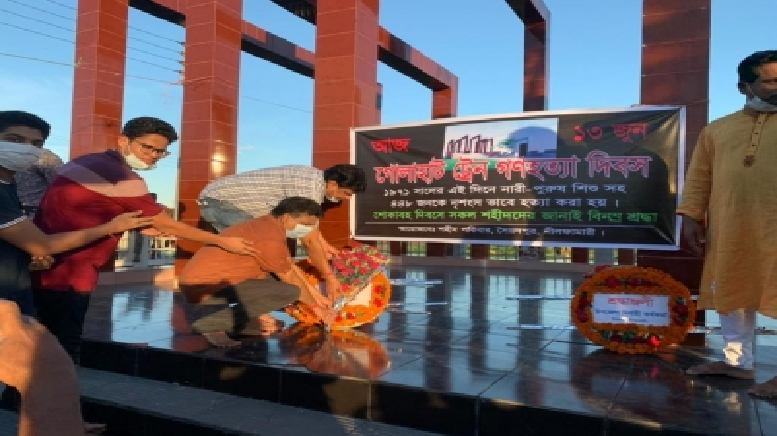 Bangladesh’s Saidpur is dripping with the blood of the victims of the 51 years old ‘Golahat genocide’ by the Pakistani Army. The survivors and the family members of the victims are still awaiting for justice.

It was June 13, 1971, when more than 480 people were chopped to death in Saidpur by the Pakistani Army during the Liberation War. Some victims sought to be killed by shooting but they were kicked and the soldiers told them that the “Pakistan government would not waste their expensive bullets on the Malauns (derogatory term used for non-Muslims)”.

It has been 51 since the black day, but successive governments did “almost nothing” to preserve the memory of the victims who are martyrs of the Bangladesh Liberation War. Remembering the horrible memory, the survivors and the family members of the victims on Monday paid tribute to those who were brutaly killed in the massacre.

The exact number of people on June 13, 1971 is yet ascertained. The survivors and the family members of the victims are still struggling for recognition of the genocide.

Binod Kumar Agarwal(72), was then a youth who narrowly escaped death. Agarwal, a survivor of the genocide and prominent businessman from Saidpur briefed to IANS about how he jumped down from the train and survived on June 13, 1971.

“The train slowly moved out of the city, but after a while suddenly stopped at a place called Golahat. I saw a shadow, as my cousin jumped off the train, I did the same, as we saw the Pakistani soldiers along with some of the pro-Pakistani migrants standing next to the tracks. The soldiers held rifles, the locals were carrying sharp ramda (scythe),” Agarwal recalls.

“Presently we’re four to five Marwari families living in Saidpur, whereas before 1971, over 500 Marwari families lived here. They were targeted by the Pakistani Army and their local agents; on that day (June 13, 1971) 15-20 Pakistani ‘butchers’ chopped the Marwari men, women and children one after another mercilessly with the knife,” shares the aggrieved Agarwal.

“The work on monument building in memory of the martyrs, which was started seven years back is not completed yet,” Gokul Kumar Podder, younger brother of Raj Kumar Poddar – the architect of the monument, told IANS on Tuesday. They had lost their elder sister, who was newly married, along with cousins and family members on that day.

Both — Agarwala and Gokul Podder — mentioned, they are eagerly waiting for the day when the Bangladesh government will pay tribute to the martyrs of the genocide by the Pakistani Army and recognise the Marwari family, who has been killed brutally on June 13, 1971.

From the very beginning of 1971, Pakistani army started making a list of freedom fighters, intellectuals and minority people as a part of their conspiracy of “ethnic cleansing” in Bangladesh.

Later, the dead bodies were “carelessly” buried in knee-deep holes on one square km area on both sides of the railway tracks. “Those martyrs were mostly eaten by jackals and dogs,” said the survivors.

The brutality of the genocide was described by Gokul Poddar and Agarwal to IANS on Tuesday. The survivors said during the massacre, the killers were shouting “kharcha khata, kharcha khata”.

More than 480 Marwaris forced to boarded that train.

On that fateful day, they were betrayed and subjected to a conspiracy of the genocide by the Pakistani army troops and armed collaborators Jamat-e-Islami’s Albadre Razakar Bahini along with Qaiyum Khan, Izahar Ahmed and their associates, who were lying in wait near Golahat point.

Agarwal told IANS, “From the afternoon of June 12, two military lorries from Saidpur cantonment were engaged to carry us from our homes to the Cantonment. The soldiers escorted the Marwaris to reach the station from the Cantonment. The pro-Pakistani locals pushed them into the train compartments. From the spot, Pakistani soldiers abducted 20 young Marwari girls, and out of panic, their guardians couldn’t make even the slightest protest.”

The train moved very slowly along the tracks before it reached near railway culvert no. 338 in the Golahat area and rolled to a stop. To the horror, the people inside the train found that all gates and windows were locked from the outside. Binod noticed that the train was encircled by pro-Pakistani migrants carrying knives and bayonets, and Pakistani soldiers in civil dress at a slight distance.

The killers opened the gates of each compartment one by one to drag out the men, women and children, first looting all their belongings, and then stabbing and cutting them down to their harrowing deaths.

A large number of Marwaris, from various parts of undivided India during the British era, lived in a part of Saidpur which came to be called “Marwari Patti”. They stayed on in the railway town, home of an important railway workshop in the region, trading in jute and other lucrative industries.

However, Urdu-speaking migrants — who came to dominate Saidpur in 1947 — on the morning of March 23, 1971 (Pakistan’s Republic Day), when the Swadhin Bangla flag was hoisted across the country by the Marwaris, Bangali Hindus, and those who supported independence of Bangladesh in Saidpur, opposed it and rather hoisted the Pakistani flags from house-tops.

After the night of March 25, Pakistani plainclothes soldiers and the Urdu-speaking migrants, settled in Saidpur, began looting and killing Bangalis and also attempted to attack the wealthy Marwaris, though they were not Bangla speakers. Many local Marwaris and Hindu young men, around 500 were forcibly taken to the cantonment to work at the under-construction Saidpur airport.