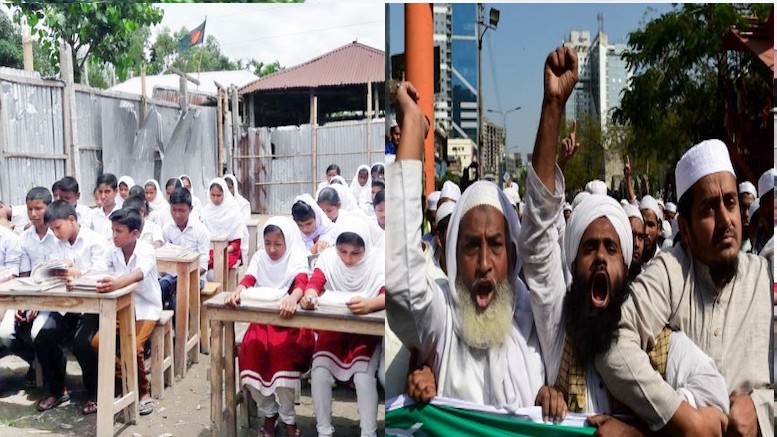 Bangladesh is erasing all Hindu names from its literary history. This trend was evident when textbooks for the new academic year were sent to teachers on the first day of the New year, free of cost. It has been observed that the new textbooks have a surge of content that upholds and promotes Islamic ideology, while many writings of non-Muslim poets and authors have been eliminated.

Alterations have been made in the textbooks of standard eight as well – ‘Ramayan Kahini’ by Upendranath Roy Chowdhury has been omitted. In Saptabarna, a textbook for standard seven, Narayan Gangopadhyay’s ‘Lal Ghoda’ has been substituted with Habibulla Bahar’s ‘Maru Bhaskar’. Even a renowned author like Sarat Chandra Chattopadhyay couldn’t make the cut and his ‘Lalu’ together with Satyan Sen’s ‘Lal Goruta’ and Rabindranath Tagore’s ‘Bangladesh’er Hriday’ have been struck off from the sixth standard textbook.

At an Islamic Unity press conference in May 2019, Hefazat-e-Islam (Defence of Islam) had submitted a memorandum demanding these amendments in the textbooks. The demands were submitted to the Prime Minister and the District Deputy Commissioner. The Kaumi Madrassa Education board had even threatened a severe agitation if the proposed amendments were not introduced immediately.

However, chairman of the National Curriculum and Textbook Board (NCTB) appeared to cower down and stated that the textbooks have been modified in a systematic manner, thereby denying allegations of intimidation by Islamists.

Many intellectuals have expressed their discontent with such alterations. Renowned novelist Hasan Azizul Haque, displeased with the changes, told Bangla Tribune, “This is being done to destroy the education system as far as possible. NCTB probably wants to make students Bonsai. Every human being is different. In our culture, we do not have the opportunity to separate the Hindus and the Muslims. ‘

Syed Manjurul Islam, Professor of English Department of Dhaka University, is pained with the move and shares, “The writings of many people including Kabi Guru Rabindranath, Michael Madhusudan Dutt are being excluded by communal ideologues so that their contribution is forgotten by the people.”

Bangladesh was formed in 1971 out of East Pakistan after Bharat intervened to stop the genocidal slaughter of ~ 3 million Bengalis (mostly Hindu) by the Pakistani Army. But even though Bangladesh Muslims have first hand experience of the madness that can ensue from notions of racial and religious supremacy, after winning independence large sections of Bangaldeshi Muslim society has continued oppressing Hindus as before. Hindus are addressed with the slur ‘Malaun’ (an Arabic word meaning ‘accursed’ or ‘deprived of God’s Mercy’) and incidents of attacks on Hindus continue even under the more tolerant regime of Awami League’s Sheikh Hasina.

A couple of years back, there was a spate of brutal murders of intellectuals, bloggers (both Muslim & Hindu), and Hindu priests – worryingly, observers say that emergence of Bangladesh Awami Olama League, a hard-core Islamic religious outfit affiliated to reigning Awami League, and its efforts to outmatch the Jaamat-e-Islami in gratifying Islamist aspirations signifies a worrying trend.

Across the border, in the Bharatiya state of West Bengal too, Hindu identity and culture are under threat from the very same Islamists who are running amok in Bangladesh. That the education system of West Bengal has been inching toward Islamization for the past few years, rather since the Mamata Banerjee government took charge of West Bengal, is not news anymore.

Many schools have faced the wrath of Muslims over Saraswati Pooja celebration (Maa Saraswati is the goddess of learning), and Hindu students are assaulted by Muslim teachers for chanting ‘Jai Shree Ram’ . School question papers directed at Islamization of young minds ask, “What provokes an evil person?” with the answer choices being “idol worship” or “namaz”. Earlier, the Bengali word for rainbow, Ramdhenu, was changed to Rongdhenu in school textbooks, lest the mention of ‘Ram’ in Ramdhenu rip apart the secular fabric of the state.

With Islamization becoming rampant, Hindu Dharma is under serious threat in the whole of Bengal, be it West Bengal in Bharat or neighboring Bangladesh.