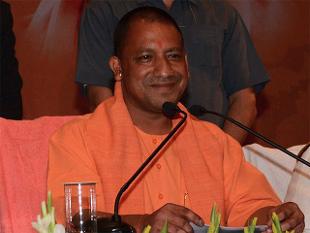 The Indian left-liberals worst fears have come true. In 2012, they dismissed the chances of the ‘Hindutva poster-boy’ Narendra Modi ever becoming a PM candidate. But despite all the fear-mongering and demonization, Modi did become PM and is currently leading one of the cleanest, most efficient Governments the nation has ever seen. Likewise, the chances of the 5-time Gorakhpur MP, Yogi Adityanath, ever becoming the CM of the largest state in the union, UP, were summarily dismissed by the same Lutyens’ cabal. Hardliner, loose canon, rabble-rouser, communal, Muslim-hater, and worst of all – a Hindu ‘priest’….Yogi Adityanath was characterized as a ‘fringe’ figure by our mainstream political commentators.

Have no doubt – the demonization project that was run against Modi will now run against Yogi Adityanath too. Each and every utterance by the Yogi, past or present, will be raked up and put under the microscope. The riots, rapes and murders that have become endemic to UP under decades of secular-socialist mismanagement, will now be demanded to end overnight. If Yogi Adityanath undertakes some bold steps on the law & order front, it will be criticized as strong-arm tactics, and if he doesn’t act, he will be criticized for maintaining status quo.

We already have dozens of articles flooding the media landscape on why Yogi Adityanath is the worst choice for post of CM, but one criticism which will be loudly leveled, more than any other, against PM Modi and BJP in the coming days & months is that they have breached the last frontier of secularism by elevating a Hindu priest/holy man to a high constitutional post. The potential argument that will be forwarded is –

1.) Will we ever see a Christian priest being appointed to head a province or State in a Western democracy like UK, USA, France etc? Those countries would never allow this as they maintain a strict separation of Church and State, which is the defining feature of secularism. Bharat has breached the barrier erected by Jawaharlal Nehru, and hence it is now well on the path to becoming a ‘Hindu Pakistan’ or a mullah-led theocracy like Iran.

2.) Even ‘modern’ Muslim democracies like Indonesia, Malaysia do not have Islamic clerics rising to important constitutional posts! By appointing a Yogi as the CM of an important state like UP, Bharat has regressed even more than many Islamic nations.

In light of this coming barrage of venomous criticism, it becomes very important for us to understand the difference between a Hindu Yogi/Sadhu and a Christian priest or Muslim imam/maulvi. If we consider Hindu Dharma as a ‘religion’ like the organized Abrahamic religions i.e. Christianity, Islam and Judaism, then yes, a religious leader rising to a Constitutional post is indeed a cause for worry as Abrahamic clergy’s belief in inerrancy of their divinely ordained religious scripture and extra-constitutional loyalty to their governing religious institution is a legitimate cause for concern.

Before we delve deeper into why Hindu Dharma and other non-Abrahamic belief-systems like Buddhism, Jainism, Shintoism etc are different from Abrahamic religions, let us try to understand the roots of ‘secularism’.

As per Wikipedia, the term “secularism” was first used by the British writer George Jacob Holyoake in 1851. An agnostic himself, Holyoake argued that “Secularism is not an argument against Christianity, it is one independent of it. It does not question the pretensions of Christianity; it advances others. Secularism does not say there is no light or guidance elsewhere, but maintains that there is light and guidance in secular truth, whose conditions and sanctions exist independently, and act forever.”

But the roots of secularism go deeper than that. The brilliant book ‘Europe, India, and the Limits of Secularism’ by Jakob De Roover (Assistant professor at the Department of Comparative Science of Cultures, Ghent University, Belgium), reviewed on Pragyata, tells us –

“Secularism is—idea wise—akin to Christianity. The genesis of the idea of Secularism is rooted in the Bible in the words of Jesus: “Render therefore unto Caesar the things which are Caesar’s; and unto God the things that are God’s.” (Matthew 22:21). The idea of demarcation of God’s affairs and Government affairs, of separation of the public sphere and the private sphere, all started with Jesus Christ himself and ended up as Secularism.”

“Though Secularism is hailed as the universal plan for pluralistic society, it is shown to be considerably untrue. As a matter of fact, European societies historically faced much more religious conflicts compared to other societies like India, Japan or the Mongol empire, even though the former societies were, religious diversity wise, much more homogeneous. The European nations discovered the road to pluralistic society through secularism which is a continuation of their own Christian culture.

…In Europe, different Christians denomination were vying for being the One True Religion, and secularism meant State’s non-patronage to any one of them to create a level field that was central to peace in society. Protestant Christianity is mostly about faith and has little to do with rituals; possibly that is how the idea of secularism worked there.”

Thus, secularism can be classified as a call for truce between warring Christian sects. It provided the necessary tolerance for compromise, to avoid what Europe experienced through long periods of religiously inspired strife, especially between the rising Protestant movement and the old hegemony of the Catholic Church.

But the same secularism which worked for Europe and the Christian West (Europe, USA, Canada, Australia, New Zealand) has failed miserably to bring about social harmony in Bharat. On the contrary, while secularism has also served the purpose of protecting Christian religion from government interference in the West, secularism in Bharat has led to total government interference in Hindu religious affairs and gradual destruction of Hindu culture.

How Hindu Dharma is different from Abrahamic religions

It is clear that we need a deep study of our own Dharmic and other Asian models for a stable plural social system with decolonised social narrative. And that is where the elevation of Yogi Adityanath as CM of UP offers such a refreshing & seminal break from the old colonized mindset.

“Dharma has no equivalent in the Western lexicon. Dharma has the Sanskrit root dhri, which means “that which upholds” or “that without which nothing can stand” or “that which maintains the stability and harmony of the universe.”

Dharma encompasses conduct, duty, justice, morality, religion, and is the defining core of the Hindu civilization. And Rajiv ji hits the nail on the head when he says –

“The reduction of Dharma to concepts such as religion and law has harmful consequences: it places the study of Dharma in Western frameworks, moving it away from the authority of its own exemplars. Moreover, it creates the false impression that dharma is similar to Christian ecclesiastical law-making and the related struggles for state power.

The result of equating Dharma with religion in Bharat has been disastrous: in the name of secularism, Dharma has been subjected to the same limits as Christianity in Europe. A non-religious society may still be ethical without belief in God, but an a-Dharmic society loses its ethical compass and falls into corruption and decadence.”

Hindus do not look to impose their ‘one, true version’ of God on non-Hindus – in fact, Hindus believe in ‘ekam sat vipra bahudha vadanti’ i.e. “Truth is one; sages call it by various names.” That is the reason why different Hindu schools of thought, and other Dharmic panths (paths) like Jainism, Buddhism and Sikhism have all co-existed with far greater harmony than Europe ever did despite being more homogenous.

Free thought has existed throughout Hindu civilization. Open debate over the meaning of Dharma, scriptures and traditions has occurred from time to time. The concept of blasphemy does not exist. There were no inquisitions or purges to eliminate those who raised questions – even nastiks (atheists) & skeptics are accepted in Hindu society.

The concept of a papal bull (public decree issued by a pope of the Roman Catholic Church) or Islamic fatwa does not apply in Hindu Dharma. Ordinary, devout Hindus have the innate ability, developed over thousands of years, to separate their private religious and public political choices. Yogi Adityanath was not elected as an MP for 5 consecutive terms just because he is a religiously ordained sannyasi; there is no dearth of Sadhus in UP. People voted for him because of his leadership ability. Even at a superficial level, Yogi Adityanath is far more qualified than the ‘secular’ alternatives – at 44, he is younger than Rahul Gandhi; he is a Maths graduate, grassroots politician, very active and experienced parliamentarian, and possesses good administrative skills developed handling a large temple trust. And let there be no mistake – people will judge him in the next UP assembly election on the basis of his governance track record as CM.

Hindu Dharma does not prescribe any particular political or judicial model – so all the fear-mongering that a Hindutva leader like Yogi Adityanath will junk the Constitution and govern as per some arcane scriptural texts, should be dismissed with contempt. However, the Constitution is a living document, as testified by the 101 amendments carried out on it thus far (many of which have mauled the original intent of the framers beyond recognition), and there are some anti-Hindu laws which need to be rectified post haste.

Every leader comes across occasions where he/she is required to take critical decisions. Great leaders take the right decision, howsoever difficult, at such critical junctures. Others maintain status quo. The UP election results threw up one such moment, and Modi rose to the occasion by appointing the most deserving candidate as CM.

Now, with a just, non-partisan government and a strong leader at the helm of affairs in Uttar Pradesh, it is imperative for Hindu society to shake off its slumber, learn about our roots, start focusing on family and upbringing of children, cogently challenge established Western notions, and truly revive Dharma on all fronts.