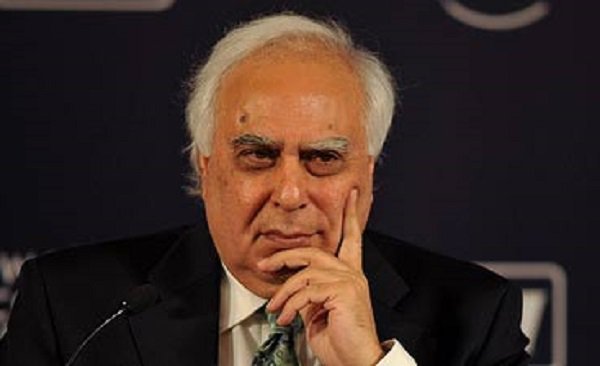 Senior Congress leader and ace Lutyens’ lawyer Kapil Sibal yesterday opposed the ongoing Supreme Court hearing into the civil appeals filed by various parties challenging the 2010 Allahabad High Court verdict on the Ram Janmabhoomi title dispute. Sibal wanted the SC hearing to be put off till July 2019, in other words till after the next Lok Sabha elections that have to be held latest by May 2019.

Sibal is appearing on behalf of the Sunni Wakf Board in the case, along with other elite Lutyens’ lawyers like Rajeev Dhawan and Dushyant Dave.

“Almost questioning the CJI’s integrity and casting aspersions on him, Sibal said the court should not been seen as helping the BJP with the Ram temple issue, one of the highlights in its 2014 election manifesto.

“The hearing should be put off till July 2019. This judgment is going to have huge political ramifications. Hearing was suddenly expedited on the request of a person who is not even a party to the case. A party is pushing its manifesto. The court should not fall into a trap. This is nothing but a trap”, said Sibal.

Sibal added: “What is the hurry? If your lordship is insisting it should be heard now and finished before the end of next year itself then your lordship must tell us why? It is perhaps the most important litigation in the history of the country. It’s going to be a judgment of such ramification, so a minimum five judge should hear it if not seven.”

Dhawan and Sibal also claimed that all pleadings in the multiple appeals filed against the Allahabad HC’s judgement are not yet complete. Additional Solicitor General (ASG) Tushar Mehta – representing the Government of Uttar Pradesh – however clarified that the contentions of pleadings being incomplete were untrue and asserted that all the pleadings have been complied with and the cases were ripe for hearing.

Dhavan also said that the hearing in any case cannot be completed even before Justice Misra retired in October next year. By this, it can be safely assumed that these powerful Congress-leaning lawyers have no intention of letting the SC come to an early decision in the matter, and will drag it out for as long as possible.

But the three judge bench headed by Chief Justice Dipak Misra and including Justices Ashok Bhushan and Abdul Nazeer, who remained undeterred, fixed February 8 as the next date of hearing.

“Yesterday in the Supreme Court, Congress MP Kapil Sibal was arguing (which is his right) for the Babri Masjid. He is entitled to do that, but is it right for him to say postpone hearing till 2019?” Modi said while addressing a rally in Gujarat’s Dhandhuka.

Ayodhya is the birthplace of Bhagwan Ram. The Babri mosque was built in 1528 after destroying an existing temple at the ‘Ram Janmabhoomi’ (birthplace of the Sri Rama) by Mir Baqi, one of Mughal invader Babur’s generals. Destruction of temples and building mosques in their place, often reusing the destroyed temple’s material, was a common practise employed by Muslim invaders and rulers in medieval Bharat. The book ‘Hindu Temples – What Happened to Them‘ by Shri Sita Ram Goel and others provides insight into this widespread destruction of temples under Islamic rule.

Both communities continued worshipping at the disputed site, and in 1885 a petition was filed by the the head of the Nirmohi Akhara asking for permission to offer prayers to Ram Lalla inside what was known as the Babri Masjid.

The permission was not given but in 1886, district Judge of Faizabad court FEA Chamier gave his verdict and said, “It is most unfortunate that a masjid should have been built on land specially held sacred by the Hindus, but as that event occurred 356 years ago, it is too late now to remedy the grievance.”

In 1950, Gopal Simla Visharad filed a suit in Faizabad civil court to offer prayers to Ram Lalla. In 1959, the Nirmohi Akhara filed another suit and sought directions to hand over charge of the disputed site.

The site was declared to be in dispute and locks were placed on gates of the Babri Masjid. In 1986, the Rajiv Gandhi administration ordered the locks removed and opened the site for Hindu worshippers, as a sop to Hindus after the Shah Bano SC judgement was overturned in Parliament under fierce Muslim pressure.

On 6 Dec 1992, Babri masjid was demolished by lakhs of karsevaks who had gathered at Ayodhya following a massive campaign led by VHP (Visha Hindu Parishad).

In September 2010, two-thirds of the Ayodhya site was awarded to Hindu parties and one-third to Waqf board by the Allahabad HC. It is this verdict that is now being challenged for the last 7 years in Supreme Court.

So, in a case which has been dragging on for the last 132 years, and for which Hindus have been patiently waiting to reclaim arguably their most holy land – the birthplace of one of the most central figures in their faith – that Kapil Sibal has asked “What’s the hurry?”

In 2015, the same Kapil Sibal had managed to get SC to issue an extraordinary stay just hours after Gujarat HC had refused to grant anticipatory bail to controversial ‘activist’ Teesta Setalvad. That  whole episode of lightening quick judicial intervention pulled off by Sibal in partnership with then CJI TS Thakur, has been brillianly explained by Kartikeya Tanna who rightly called it a ‘bizarre case of legal exceptionalism’.

That is the power and sense of entitlement that top lawyers, especially those connected to the Congress ecosystem, enjoy. Sibal, Dhawan, Dave, Nariman, Grover, Jaisingh, Subramanium etc feel it is their birth-right to decide which & when cases are heard, how the roster of judges is set, and how the Constitution should be interpreted.

Hence, the sense of outrage that CJI Deepak Mishra refused to bow to their tantrums to indefinitely delay an important case that has been hanging fire almost since Independence.

Sibal & Dhawan’s innuendo that the CJI is somehow a closet supporter of BJP or the Hindutva cause would normally invite contempt of court proceedings against anyone else, but such is the clout that the Lutyens’ lawyers club enjoys that they will go scot-free.

If anything, CJI Misra has the same Congress pedigree that most people in High positions in our country exhibit. He is the nephew of ex-CJI Ranganath Misra who went on to become a Congress MP post retirement. The Ranganath Misra Commission constituted in Oct 2004 (Sonia’s Congress wastes no time in implementing its anti-Hindu agenda) had recommended 10% quota for Muslims as well as SC reservation for Dalit converts.

Yes, there are allegations of impropriety around CJI Dipak Misra, but then again not many CJIs in the last couple of decades can claim to be clean on that front, as we have analyzed previously.

CJI Dipak Misra has resolutely refused to reconsider the NJAC judgement passed by a bench headed by previous CJI Khehar, and has sparred publicly with the country’s Law Minister over the issue. The NJAC law was introduced by the present Government to bring more transparency and accountability in judicial appointments. Yet, he is a Modi stooge for Sibal and gang!

The left-liberal ecosystem is probably upset with CJI Dipak Misra because he has dared to deviate, if only slightly, from the liberal script – Justice Misra had refused to entertain the midnight petition filed by Lutyen’s high & mighty to stay the execution of terrorist Yakub Memon.

Consider another example of how the left-liberal brigade demands absolute compliance to get into its good books. This piece in The Quint viciously mocks Justice Anil R Dave for a few judgements not acceptable to the left-lib mafia. By the way, Justice Dave had once flippantly asked “Are you getting an Olympic medal also for this?” while dismissing a petition by Hindu organizations to allow Dahi Handi celebrations. But no Hindu dared to diss the judge in the crude language employed by the liberals!

This whole episode again shows how the Congress secular-liberal ecosystem is the most fascist, intolerant group in the country. Their double standards and hypocrisy are unparalleled, and so is their contempt for the ordinary Hindu of the country.