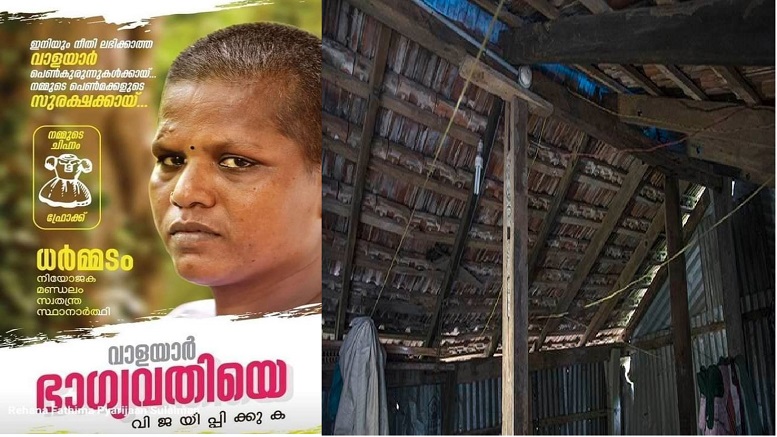 A Hindu Dalit lady called Bhagyavathi is contesting against Kerala CM Pinarayi Vijayan from Dharmadam in the Kannur district of Kerala. She is the mother of two minor girls aged just 9 and 13 who were allegedly murdered by their rapists, the elder in January of 2017 and the younger in March of the same year near Walayar in Palakkad district.

The younger girl was a key witness since she actually saw the culprits run away from the scene of the first murder, that of her elder sister.

A partisan government allegedly worked hard to weaken the case since CPM cadre were involved. In fact, the whole suppression of the truth appears to be to protect an accused who is a relative of a particular eminent CPM party leader.

The parents of the dead children have done everything possible to bring some form of justice for the deceased but their efforts remain unpaid as yet. They sat in front of the secretariat through the heat and the rain, they met Vijayan at Thiruvananthapuram, and later on, the courts and our whole justice system abandoned them.

Ultimately, Bhagyavathi tonsured her head, publicly signaling her decision to fight against the same Vijayan at his very own bastion, Dharmadom in Kannur. She plans to get her vengeance by planning to pull in the same votes that sent Vijayan to the Secretariat five years ago.

Her question, especially to women voters, is plain and simple. Would you vote for someone who conspired to free murderers of your girl child? Her party symbol is a frock (a short dress, worn exclusively by young girls). This should shake up the core of one’s conscience even if one were a blind communist follower. The same question will be asked all over Kerala, especially where other leaders who were involved in this alleged conspiracy seek votes, this time around.

The children were raped and then left to hang. On that fateful day of January 13, the 13-year-old was found hanging from a beam 10 feet high in the single-room house that she shared with her younger sister, an elder brother, and her parents. Both her parents were daily wage earners who were at work when the incident happened.

The small girl informed the police that she saw two masked men run away from the scene and both the parents alleged murder. Earlier, the father had in fact seen Madhu, the prime accused indulge in abusing the elder girl. When cornered, Madhu escaped through a window following which the girls had opened up about the abuse. This is what the girl confessed to her parents back then. “They had threatened me with death if I reveal it, I was scared.”

But the police ignored them and wrote off the incident as ‘unnatural death’, ie. suicide. The girl who committed ‘suicide’ by hanging herself from a beam over twice her height had even left a set of clothes to use after her shower in the bathroom, if one is to believe the police version!

Forget police training, even a layman could figure out that it was murder, plain and simple. Someone had either killed her and then tied her on the rope or a couple of guys had forced a loop around her neck and then hung her. They overlooked the two masked men reported by the younger girl and instead reported suicide. Why?

That the younger girl died within two months after her sister was a clear case of silencing a key witness and that too a child. What should certainly have rung the bells in the upper echelons of the police system astonishingly drew the opposite reaction. They sided with the ruling party and weakened the case, exactly why sexual deviants still roam near our schools preying on young girls.

The prosecution did not record the statements of witnesses or provide enough evidence in court. Feminists and the secular media were absent and there was no outrage from the liberals like is common when rapes and murders happen in BJP-ruled states.

A POCSO court freed the accused, mentioning ‘lack of evidence’, with a light rebuke to the people in power for the shoddy investigation. The investigating officers, the doctors who conducted autopsies, the prosecution lawyers all allegedly participated in hiding the truth, thereby indulging in a criminal conspiracy at the behest of the all supreme Communist Party. No action has been initiated against them as yet.

The judgment clearly states what should have been done (but was not) on the part of the police, the doctor, and the prosecution, which makes it amply clear that the judge knew what was going wrong but still closed the case instead of suo motu ordering a re-investigation. This comes from the same people who might make us pay a fine for a car honk inside court premises!

The massive outrage that followed prompted the Kerala High Court to direct the CBI to re-investigate, exactly what should have been done back when the children died. Some of the accused were later re-arrested but more importantly, some were not. Suspiciously, the state government tried to misguide the court even then by asking for a CBI probe to be restricted to the death of the first child only. Why?

Two primary postings done by the state exposed the politician-bureaucrat nexus. This was explained by the defense lawyer way back in October 2019. The POCSO court acquittal of the accused back then indicated how they might have subverted the natural course of justice and performed their sabotage role to perfection. Sub inspector of Walayar police station P.C. Chacko was later suspended for the lapses and replaced by Palakkad Narcotics cell DySP M.J. Sojan. Shockingly, N Rajesh, a lawyer who chaired the Palakkad Child Welfare Committee as a CPM nominee, defended an accused named Pradeep Kumar in this rape and murder case.

All of them allegedly interfered negatively with the case. Sojan had alleged that the sex was ‘consensual’ and was later rewarded with promotions by the state government. The manner in which the bodies of the victims were hurriedly cremated without the parent’s knowledge is also suspicious.

The CPM tried its best to make it look like the BJP was instigating the lady to turn against them. But Bhagyavathi herself said that she will accept the support of any political party except the Sangh Parivar. What prompted her to make this statement is unknown. As for Vijayan, he has never won or contested from anywhere else other than Kannur. For such a ‘tall leader’ of the masses who was touted as the next Prime Minister, a wounded mother challenging him on his home turf just about sums up his woeful 5-year tenure.