The politics of Jallikattu 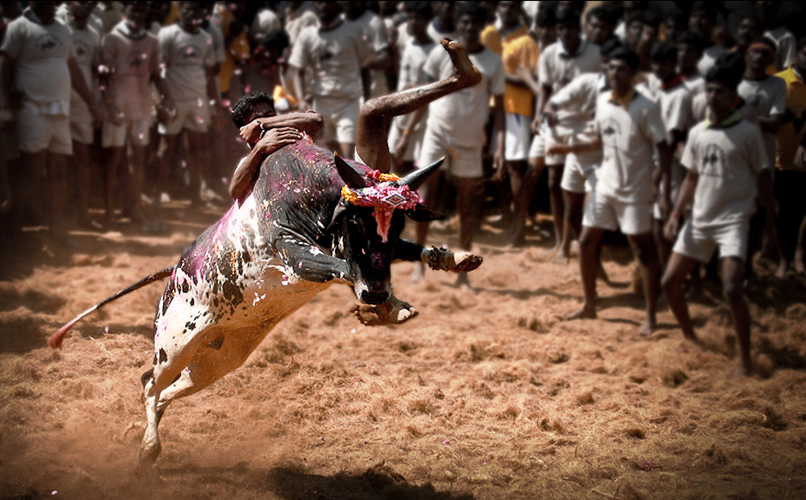 Wisdom lurks in the most unlikely places. Such as in a peppy Tamil rap on You Tube  Takkaru  Takkaru by Tamil rapper rapper-turned-composer, Aadhi aka Hiphop Tamizha.

The rap loosely translates, “We see the bulls and cows as our own begotten child, then how could we torture it? The politics behind such accusations and the ban is malice instigated for (exotic breed) business. Ban the sport, the native breed dies and foreign markets would grow. Ignorant Tamizha, you will lose your identity and die a slow death. Lose your identity and you are going to be a refugee in your own land. Takkaru, this is our land!”

Pongal, the bountiful harvest festival of Tamil Nadu, has just concluded. The festival, accompanied by festivities across the state, inaugurates the month of thai (January 14-Fenruary 14) in the Tamil calendar. It is also that time of the  year that  is associated with Jallikattu, the traditional bull taming (literally the  word means embracing the bull).

“Politics without principles, education without character, science without humanity,  and commerce without morality are not only useless, but positively dangerous,” said Mahatma Gandhi. The Jallikattu fracas and the murky conspiracy behind its ban exemplifies this dictum in both letter and spirit.

Since the last four years, Jallikattu has become a demonised sport  that attracted national and global notoriety for ostensible cruelty to animals – a carefully orchestrated attempt by a cabal of  national and international  animal rights NGOs, pseudo liberal intellectuals,  evangelical lobbies, dubious animal rights activists, their rich and powerful patrons and political players in the country who sought to ban the sport.

However, the outrage against the  Supreme Court mandated  ban order in 2014 on the sport snowballed into a pro-Jallikattu People’s movement on the Marina in Chennai, led by farmers, cattle owners and agricultural scientists for whom the protest was a  justifiable means to safeguarding of what they saw as their tradition and an integral part of their identity.  An incisive analysis of the Jallikattu protest that burgeoned into a movement can be read here.

Hence against this contentious backdrop, Congress leader Rahul Gandhi, just back from his Roman holiday, visited Madurai to attend the Jallikattu event. The ostensible purpose of his visit was to “celebrate Pongal with the people of the state and lend moral support to the farmers as part of his opposition to the central farm laws”

The timing and choice of the visit have several significant political takeaways. Setting the political agenda ahead of the Assembly election during April-May 2021 in the state, Rahul Gandhi said his Tamil Nadu visit is a message to “those who think they can target Tamil people, language and culture.

“It is my duty to stand with them and protect their culture,” Rahul Gandhi said as he addressed the Jallikattu event on Thursday.

Not surprisingly,  the visit  has  stirred a hornet’s nest. The BJP has slammed the Congress, accusing it of backtracking  on its earlier stance  of vehement  opposition to the traditional sport.

In 2011, when the Congress-led UPA was in power at the Centre, the environment ministry under Jairam Ramesh had issued a notification banning the use of bulls as a performing animal. This meant that the bulls could not be used in sporting events such as Jallikattu. However, Jallikattu continued under the Tamil Nadu Regulation of Jallikattu Act No 27 of 2009 brought out by the then M Karunanidhi government. The Tamil Nadu law had been brought out in response to a Madras High Court ruling of 2006 banning Jallikattu while hearing a petition on rekhla (bullock cart) race. It provided for a window of five months between January and May for holding Jallikattu.

In 2010, the Supreme Court approved the conditional permission for holding Jallikattu under the 2009 law of Tamil Nadu. The  ban on the use of bulls in sporting events such as Jallikattu was imposed by the Congress-led UPA government the next year. However, the tide tuned again. In 2014 during the Lok Sabha election, the Supreme Court in May 2014 struck down the Tamil Nadu law of 2009, banning Jallikattu altogether.

Just before the Tamil Nadu Assembly election five years ago, the Narendra Modi government in January 2016 amended the 2011 notification of the environment ministry allowing both Jallikattu and the bullock cart race with certain conditions. The Congress, however, remained firm on its stand on Jallikattu. Its election manifesto for Tamil Nadu polls in 2016  said, “The party supports the ban on Jallikattu.”

So, how does one sift fact from fiction? Fact from fantasy? Politics and electoral opportunism from ground reality?  S. Muralidharan, one of the  prominent figures in the Pro Jallikattu campaign and animal welfare activist, traces the complex and convoluted  rhetoric  of  the Jallikattu movement.  The frank, fearless and outspoken Muralidharan openly  admits that ever since Rahul Gandhi’s decision to witness the Jallikattu, the “BJP in Tamil Nadu has been peddling lies!”  The video can be watched here.

The detailed analysis by S. Muralidharan on the politics of the Jallikattu ban, with  its behind the scene machinations orchestrated by powerful politicians,  dubious animal rights activists and  the role of PETA (People for Ethical Treatment of Animals) also shows the  cabal  using  the same modus operandi to sabotage  the Jaipur elephant rides (and  destroy the livelihoods of people dependant on it) with their doctored reports of  cruelty to the elephants.

“We need to ensure that no foreign  force will attack our culture in any form. This  is where Neo Hindutva fails! Jallikattu temple elephants, dahi handi, holi colours, Diwali crackers, rekhla, Khambala, cock fights and circuses… the list is endless… Once we become cultural orphans , we will become susceptible to conversions . Soon we will become a minority in our own country!”  signs off Muralidharan on a dire note.