‘We retaliated after being molested and abused’- Diksha Verma, ABVP 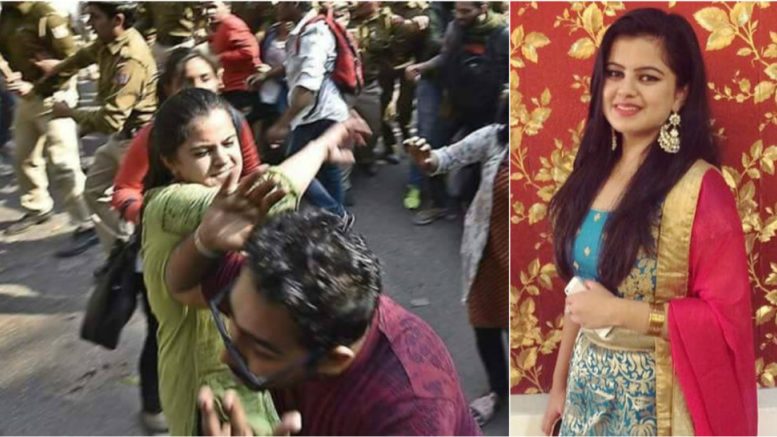 The recent happenings at Delhi University, which began with protests at the Ramjas College and then turned into clashes between left-led student organizations like AISA (student wing of Communist Party of India (Marxist–Leninist)) / JNUSU (JNU Student’s Union) and ABVP (Akhil Bhartiya Vidyarthi Parishad) / DUSU (Delhi University Students Union) on 21st and 22nd Februray 2017, have been widely covered by mainstream media.

While many media houses reported that ABVP initiated violence, there have been conflicting reports from the ground. In this media hysteria, the fact that has totally been forgotten is that the problem began with anti-national slogans that were raised when the invitation to sedition-accused Umar Khalid by some students and teachers of Ramjas college was cancelled by the Ramjas administration.

Some news channels have presented various stories from the left spectrum of student politics. To bring more clarity and present the perspective of the other side too, we have spoken to Diksha Verma, a North Campus student who is also the District Girls Coordinator of ABVP, who was present on ground during these recent happenings. Here is her interview :

Below are the key points of the interview :

Q.) Thank you for taking out the time to speak to Hindupost. You yourself are a student of North Campus and you are an active participant in the activities of ABVP. You were also present on ground through out these recent events in Ramjas. So first of all, please tell us how did so much of agitation begin?

Diksha – I’ll tell you the entire episode in brief..

Q.) So what really happened? How did it all start?

Q.) You must be talking to other students about these issues. What do you think is the general opinion/mood regarding the mainstream media?

Q.) Do you know that recently some of the leftist and communist students had totally blocked the administration wing of JNU for many days, even threatening professors against entering the block at one point. The High Court had to tell the JNU lawyer to approach the law/court? There was no media hysteria on that….what explains these double standards?

Your message will be passed on. Thank you for speaking to HinduPost.

The stereotype which has been successfully created by MSM is that ABVP is a student body of uncouth, rustic types (or in Ram Guha’s words, “the  kind of Indian who gets up before dawn, has a glass of cow’s milk, prays to the sun god..complaining, angry, or downright abusive…incapable of reasoned discussion or debate“) whereas the reality is that there are a lot of bright, articulate young minds who are increasingly getting drawn to ABVP due to the clear contrast it offers from the cliched, communist spiel of leftist organizations.

In normal scheme of things, Diksha Verma would be lauded as a role model for all young girls due to the courage she showed in physically retaliating against her male attacker. But such is the poisonous public discourse created by our ‘secularist’ mainstream media that Diksha and her colleagues have been painted the villain of the piece.

While our media hyperventilates & selectively outrages over certain incidents in college campuses (JNU protests, Vemula suicide, FTII protests), deadly violence against disadvantaged students in left-dominated campuses of Kerala go unheeded. If this does not prove agenda peddling and skewed vision of our MSM, what does?

Diksha was not the only girl who was attacked by leftist goons in the whole Ramjas Fracas. Prerna Bhardwaj, ABVP Unit President of Kirori Mal College in DU, has also come forward to narrate a horrifying tale of how she was molested and attacked by leftist students. This post by her on Facebook throws more light on the reasons behind Ramjas students’ protest against the seminar being held on their campus.

If a Gurmehar Kaur has the right to express her opinion without fear of abuse & violence, why don’t our Lutyens’ elites and self-declared intellectuals afford the same privilege to Diksha Verma and Prerna Bhardwaj?