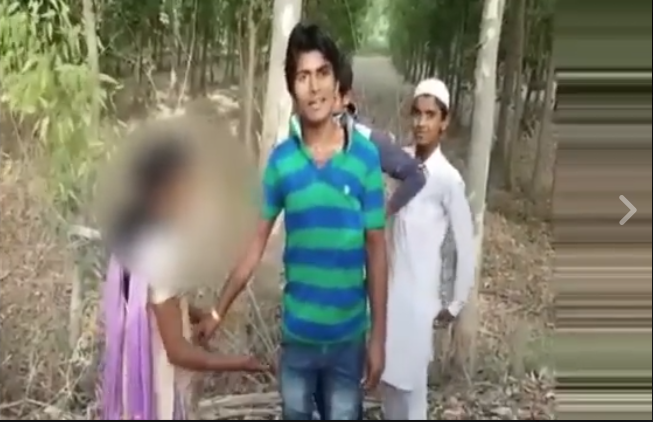 A shocking and painful video has surfaced from Uttar Pradesh’s Rampur district. In the video, a group of 14 Muslim men can be seen molesting, groping, harassing two Hindu women.

Though major newspapers and news channels carried out the story about the unfortunate incident, no-one bothered to reveal the identity of the accused in their stories. Had it been a standard practice of media houses to hide the identity of the accused as well as victims in all cases, we would not have raised objections. Instead of sampling past stories of violence against Hindu Dalits or Muslims, we advise people to pick-up past editions of any newspaper featuring violence against Dalits or Muslims. You can see that the identity of the victims is not only mentioned in the body of the stories, but captured in bold letters in the headlines. In such cases, the headlines would read as such ‘Muslim men…. by right-wing outfits’. Sometimes, mainstream media would also indulge in the science of prediction and assume the accused as Hindus. The false reporting of violence against minorities and their religious institutions just before the New Delhi assembly elections is still fresh in the minds of people. Whenever the administration fails to identify the accused, media houses conveniently ascribe it to right-wing organizations.

Coming back to the recent video that has surfaced, let us sample some of the headlines carried out in the mainstream media.

Here is a sampling:

One can clearly see that in this case, the mainstream media cleverly hides the identity of the accused as well as victims. It is no wonder that after reading such stories, people are misled. Half-truths do create confusion and one can find the proof in the comments section of online editions. Some people have commented that minorities and women are not safe in the state of U.P. Readers would not have posted such comments, had it been clear that the victims were not minorities, but Hindus and accused were from the minority community.  This sort of selective witch-hunting and selective shielding has been going on for several years.

What is more shocking than the shocking video is the response of the so-called conscience-keepers of society. They are using the surfaced video to further their ulterior agendas. Whenever there is an incident of violence against any Muslim in this country, the who’s who from all walks of life, lose sleep. There is an instant outrage. No stone is left unturned to tarnish Hindus groups. Suddenly, India (as they don’t believe in Bharat) becomes an intolerant country, not suitable for living. When the victims are Hindus, life seems to be normal for them in India.

When Chief Minister Yogi formed anti-Romeo squads to tackle the menace of eve-teasing, women in the state gave a thumbs-up to the squads. After a long-time, poor and middle-class people with modest backgrounds heaved a sigh of relief, hoping that things would now turn to normal. The mass approval of the squads was rejected by the so-called intellectuals as they feared rise in the popularity of the Chief Minister Yogi Adityanath.  They immediately set out on a task to rob the Chief Minister of the popularity he had gained in just a few days of assuming power. These elites gave the anti-Romeo squads a communal color by stating that these were designed to target minorities, particularly Muslims. Literature lovers gave another color to the squads. For them, the move amounted to vilifying Shakespeare’s Romeo and wished the government had named the squads after any Indian.

Now, when one of the news channels referred to the perpetrators as Ravans, should we Hindus condemn the channel for naming the ruffians as Ravans or applaud the channel for highlighting the plight of women and bringing the incident to the fore. For us Ruffian or Ravan does not matter if the perpetrators are brought to book. But yes, we demand fair representation in the media. We demand naming the culprits as 14 Muslim men and not 14 men.

The same journalists who had attributed communal intent of the government in establishing the squads are now taking the front-lead in attacking the government for failing law and order and rising crime graph against women in the state.

Opposition parties and their leaders also lived up to their reputations and did not make a single comment aiming to heal the wounds of the victims. Their responses were political remarks aimed at scoring cheap political points against BJP and maligning the government. These remarks lacked sympathy for the victims and purely smacked of insensitiveness.

Commenting on the painful video, Congress politician Mr P. L. Punia was quick to blame organized Hindu groups for the increasing crime in the state. The Congress leader must know that the people involved in the crime did not belong to any Hindu group, but to a community. Be bold enough to blame the real culprits and not play dirty games to revive your political fortunes.

Rampur is one of the several Muslim majority districts in Uttar Pradesh. It is the same district where BSP tried to weave a Dalit-Muslim alliance, but failed to capture the imagination of voters.

Azam Khan, one of the powerful leaders from SP known for making controversial, communal, crass remarks holds a sway in this constituency.  Asked to comment on the disturbing video, Azam Khan lived up to his reputation. He made a sarcastic remark thanking Yogi ji and media for the vulnerable situation of women and came up with a weird suggestion of not allowing women to step outside their homes. One could see him smiling when making these statements. Any person with a human heart would not laugh on such a horrible incident.

BSP leader Mayawati has not uttered a single word against the accused. Why so, our Dalit brothers and sisters should ask. Are Muslim votes more important to her than Dalits? Why do our politicians believe Muslim voters would be put off by anyone criticizing those Muslims responsible for this reprehensible, inhuman act?