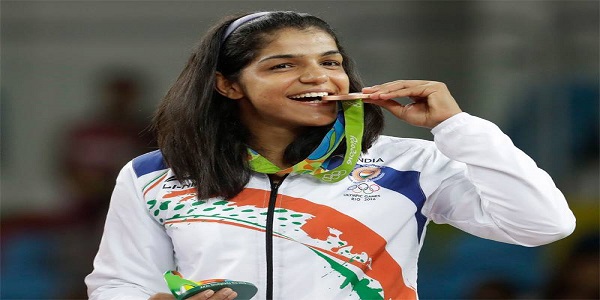 Nadeem Nambardar, a Samajwadi Party (SP) worker from Meerut, Uttar Pradesh has been booked under the IT Act for making derogatory remarks on Facebook against Olympic bronze medal winning wrestler Sakshi Malik and Hindu religion.

A complaint was filed against Nambardar by a local social group Swadeh Seva Sansthan, leading to the case being registered against him. The Cyber Cell is probing the matter and police is trying to ascertain the whereabouts of the accused who is absconding. Nadeem Nambardar’s Facebook account has also been deactivated.

Here is a screenshot of the derogatory comment made by Nadeem Nambardar, a college graduate as per his FB profile – What explains this bigotry?

It is tempting to dismiss this statement as an aberration; many Muslims around the world too would condemn the bigotry exhibited by Nadeem Nambardar – not least those Muslim women athletes who have won laurels for their countries in the just concluded Rio Olympics. This article on Hyderabad-based site SiasatDaily.com has compiled a list of such winning Muslim women athletes – it includes 2 wrestling medal winners. While the article is generally celebratory of the athletes’ achievement, it strikes a discordant note by saying “Islam instructs a girl to be modest and her pious body to be covered….some of them wore hijab while playing, and became the champ of the event. If the play is participated gracefully and with the genuine spirit, there is no harm on Islam.” It is a sad commentary on the deeply entrenched conservative attitudes in Muslim society of Bharat that even a simple act of participating in sport needs religious sanction. But still, this article represents a vast improvement over the bigoted views of SP’s Nadeem Nambardar.

The reality is that the two views held by Nadeem Nambardar are shared by a large section of Muslims in Bharat – the first view related to Hindu women being more ‘loose’ in morals as they don’t cover-up from head to toe like a good Muslimah, and the second view of Hindu Dharma being ‘superstitious’ while Islam is the one true faith. Such bigoted views have developed through long periods of indoctrination by fundamentalist Ulema, hardline seminaries like Deoband, and revivalist grassroots movements like Tablighi Jamaat. The surge in Wahabbi/Salafi preachers travelling to Bharat during UPA-2 (as pointed out in this excellently researched piece) has accelerated this radicalization.

Muslims of Bharat today need to change their socio-religious outlook towards women and non-Muslims. They must stop seeing Hindus as inferior human beings destined for hell. If we want to see true peace and brotherhood, this exclusivist, supremacist monotheistic mindset needs to be eradicated, else we will continue to see conflict in Bharat and the rest of the world.

Media & our education system has a big part to play in this social campaign. For over a century now, Hindus have been repeatedly berated about the flaws in their socio-religious systems – caste discrimination, gender issues etc. While this campaign has often swung to the other extreme and degenerated into a Hindu bashing exercise, still Hindus have patiently listened to all valid criticisms and made significant progress on the social front. This 2010 piece by MJ Akbar, while skirting the issue of Muslim insularity, highlights the “extraordinary cultural revolution that has seeped across divisions of caste and community through the continuing emancipation of Hindu women.”

It is time that the same critical lens is applied to Muslim society, and all the ugly bigotry and medieval attitudes simmering below the surface are exposed. People like Nadeem Nambardar have to be named and shamed, repeatedly; the mullahs that control the Muslim mind have to be challenged. But for that, our media and education system will first have to get out of the clutches of the psuedo-secular Hinduphobic mafia that controls these crucial fields.