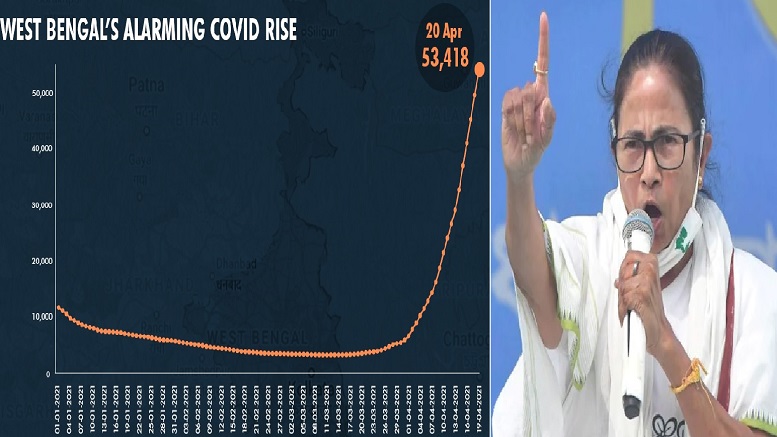 Even as BJP canceled all big political gatherings in poll-bound districts of West Bengal and the PM decided to conduct only virtual meetings in light of the worsening Covid-19 situation in the state, the ruling Trinamool Congress (TMC) and its supreme leader Mamata Banerjee continue their mass rallies.

Motormouth TMC MP Derek O’Brien had tweeted on 18 April that Mamata will only conduct a ‘symbolic’ rally in Kolkata on the 26th while her rallies in other districts will be restricted to ‘just’ 30 minutes. One wonders if TMC has access to some special research showing that Covid doesn’t spread for the first 30 minutes of a rally!

Also, the 66-year-old Mamata has not yet taken the Coronavirus vaccine herself. What message is she sending to the people of Bengal? Seeing their leaders take the vaccine is essential to remove whatever doubts citizens might harbor due to the misinformation and anti-vaccine sensationalism which media has been spreading. Amazingly this is happening at a time when the state is facing a test positivity ratio of above 20%, ie. one in five of those tested are infected with the Coronavirus.

A state with an estimated population of more than 9 crores is conducting less than fifty thousand Covid tests each day! A similar and neighboring state in terms of population, Bihar is testing on average one lakh people even though it has a comparatively lesser test positivity ratio of around 11%.

That her preferences remained misplaced was evident since last month when the second wave of the virus started to spread its tentacles. Mamata missed not one but three key crucial Covid review meetings scheduled between the Prime Minister and Chief Ministers of all states. Incidentally, Mamata also holds the additional portfolio of the health ministry of her state.

Addressing a rally, she even blamed the central security forces brought in by the Election Commission to conduct free and fair elections in WB, openly insinuating that they were bringing the virus!

From a national security perspective, West Bengal with such close proximity to Bangladesh is of strategic importance for the whole country. Mamata has openly opposed both the CAA and the NRC bills and has challenged the central government by adamantly disagreeing to implement them. Her minority appeasement policies are such that they are encouraging more and more illegal immigrants including both Bangladeshis and Rohingyas, to pour into our country. They are also alleged to form an important TMC vote bank.

Hence the stakes are high in the current elections as they will have important national security repercussions in the coming years. Voting is scheduled for 26 and 29 April for the final 2 phases of the 8-phase assembly poll.

The top BJP leadership including Prime Minister Narendra Modi, Home Minister Amit Shah, and the BJP President JP Nadda have canceled their in-person political rallies and have now opted for virtual rallies, while other party leaders will limit their events small groups of supporters numbering 500 or less. What is stopping the TMC from doing so?

“BJP Bengal unit and the voters of West Bengal were looking forward to his (Modi’s) visit but we realize the gravity of the situation and the rationale for him not being able to make it in person.”

“We have since requested the Prime Minister to address the entire constituency at one time through a virtual address and we are pleased to confirm that he has agreed to do so.”

The PM had high-level meetings scheduled for Friday to review the worsening Covid 19 situation – reviews that Mamata has truculently declined to join all along.

In fact, the BJP and its ally the JDU had mooted the idea of virtual campaigning long back in June of 2020 when the Bihar elections were around the corner and the country was yet to recover from the first wave of the virus. The opposition parties including the RJD, Congress, and the Left parties had vehemently opposed this move back then. The reason given while conveying their reservations is something that has now glibly been forgotten in all the ‘secular’ outrage over “Modi’s and Shah’s election rallies”.

These parties had argued that a virtual campaign would “exclude a large section of the rural society since they had no digital connectivity” adding that the concept “is socially and economically discriminatory” and, thus, against the “principle of equality” and “violative of a level-playing field in the democratic exercise”. Apart from feeling like an admission of guilt (the poverty afflicting states like Bihar and WB is the result of decades of neglect and mal-governance by these very same ‘secular’ parties), this attitude also shows their Luddite mindset . No wonder that it is these same parties who want to revert to paper ballots and ditch the EVM.

This is what the Communist leader D Raja said back then when his party opposed the proposal:  “Can the EC spend from its own funds to digitally connect the entire voters of Bihar and provide all parties enough digital equipment to ensure a level-playing field?” What digital equipment is D Raja talking about – even a smartphone is enough to livestream these days. As it is, his CPM comrades control almost all the TV channels down in Kerala. And the much reviled Ambani has done more for digital connectivity through cheap mobile data in the last 5 years than Communists can dream to accomplish in 50.

It is also astounding that political outfits which looted public money for decades, and are increasingly being rejected by voters everywhere, now want the state to sponsor their party!

As expected, the coverage of BJP’s announcement of canceling political rallies has been subdued, while Mamata continues to escape scrutiny for her venomous diatribes and rabble rousing. All the chatter about ‘crowds at rallies’ appears to be solely because BJP seems to have a real chance of breaking Mamata’s grip over Bengal this time around. Everyone from The Print to its coterie from the Lutyens media was howling about social distancing and whatnot at earlier BJP rallies. But now that Didi is the only on left holding large rallies, these sounds of dissent will go totally silent.