The once prestigious public state university in Kolkata has relegated itself to being the nexus of propaganda and treacherous Communist politics. The university finds itself in the news every other day, and almost every time for the wrong reason

Jadavpur University (JU) was in the news again, after a student of the University, Arko Dev, launched an orchestrated harassment of another student of the college, Samprati Modak. Dev, who identifies with the Communist ideology, is also known for carrying out pro-feminist rallies. Hence, it is shameful that he and his fellow Marxists would plot an attack on a fellow-student, a woman, merely for nurturing a different ideology. In a series of viral tweets, Sampati shares her horrific experience. The Tweet-thread has already been shared over 4000 times.

The harassment commenced after JU student Samprati Modak opposed SFI (Student Federation of India, Communist Party of India-Marxists’ student wing) members who were peddling a vicious campaign against Prime Minister  Narendra Modi following the martyrdom of the 20 soldiers at the Ladakh border. She was targeted by Arko Dev in the official  WhatsApp group of the university’s  International Relations stream.

Inspired by the language used by Islamic terrorist Adil Dar, who rammed an explosives-laden vehicle into a BSF convoy at Pulwama last year, Dev, in the middle of a social media argument, took a jibe at Modak and asked her to ‘drink cow urine’.

This Hinduphobic remark must not be overlooked anymore. Denigrating Hindus as ‘cow urine drinkers’ is a practice of Islamic terrorists like Adil Dar or equally bigoted Islamist celebrities and and Hindu-haters like US Radio Producer Furkan Khan.

Samprati Modak also accused Arko Dev of being casteist and highlighted his discriminatory attitude towards fellow-students who hail from SC (Scheduled Caste) and  ST (Scheduled Tribe) or OBC (Other Backward Caste) communities, just because they choose to align with a different political ideology, the ABVP. Let’s take a look at what Samprati said in her tweets –

“I belong to a very ordinary background & he is from an influential family. He & his entire lobby is taking advantage of it. There is a lot of pressure on me for many days. These Bhadraloks & advocates of Casteless society pass casteist comments. Pretty much shows what filth they are.

Being a woman in the left dominated place I have earned my FoE. As I am not an upper-class Bhadralok like them. Democratic ‘Communists’ want me to abuse my religion, Hinduism, and ideology, Hindutva. When I didn’t do it they passed casteist slurs on me & they claim to be paragons of Equality. This hypocrite master of communist circus removed me from the official group of International relations, JU.

“ABVP, JU panelists Subhadeep Karmakar is SC, Mrinal Khandit is ST, Ram Mangal Gope & I belong to OBC. Communists have abused entire Hindu community and ABVP by using such slurs. Irony is, they talk of a casteless society.” 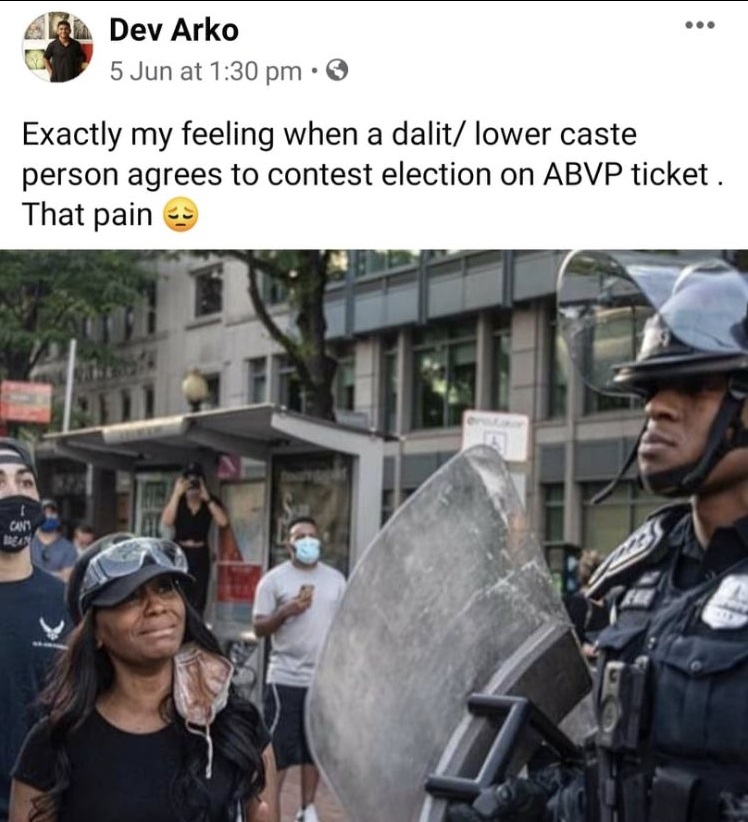 In the above Facebook post, Arko Dev equates Dalits and OBCs with Black Americans – making a complete joke of history, facts and logic. Apart from exposing his ignorance, it also demonstrates the sheer arrogance of Communist elites who think ordinary Hindus don’t have the agency to think for themselves!

Blacks were shipped to America from Africa as slaves by White Europeans and only won basic civil rights in the 1960s. They comprise only 12% of American society and both Blacks and Whites in America are overwhelmingly Christian. Black anger over deep-rooted racism in American society is real, although some of the violence and anarchy we witnessed in recent anti-racism protests in America had a different agenda altogether.

Dalits and OBCs comprise atleast 70% of Hindu society – does Arko Dev want us to believe they all comprise a different ‘race’ compared to the remaining 30% Hindus? Hindu society as a group has fought genocidal foreign invaders for the last 1000 years. All sections of our society, tribals included, have led this struggle for existence at some point or the other. Even today, when Dalits are being persecuted in Pakistan and Bangladesh, it is BJP-voting ‘upper caste’ Hindu who is standing up for them by supporting CAA, while the likes of Arko Dev are busy appeasing Islamists. An OBC is the PM of this country, and the entire country stands behind him, except for deracinated worshippers of Marx, Mao and other foreign ideologues.

This is not the first time Communists from the state have unleashed their verbal violence and boorishness on social media users whose opinions differ from them.  Last month, Leftists from the same demography had threatened a Bengali Hindu blogger for presenting views in support of the Indian Army and opposing the secessionist ideologists of all ages, who had cropped up in the state soon after cyclone Amphan.

Moreover, with the state struggling to contain the steep rise in Covid-19 infections, West Bengal has extended its lockdown period till July 31, 2020. The utter failure of the administration in controlling the pandemic is evident. With the global pandemic tightening its grip around West Bengal, and the ruling party getting more desperate as elections approach, Bengal has to shed off the Communist/anti-Hindu mindset propagated by a section of its elites and support new, bold voices like Sampriti Modak.