Faiz Ahmad Faiz and the de-Islamisation of a ‘Muslim revolutionary’ Faiz has often been seen as a Communist poet by many progressive circles within the sub-continent. The Communist Parties of India have celebrated Faiz’s poetry, and have used his verses to forge new slogans to further their propaganda. The major left parties regularly use Faiz’s poetry according to their political needs. His religion, i.e Islam, is taken to be at best irrelevant, or at worst accidental for his revolutionary poetry.

Faiz, for many progressive activists, is a relatable figure, whose revolutionary thought inspires his poetry on social justice. Some of his poems like Bol ke lab azaad hain tere, Hum dekhenge and Ye daagh daagh ujaala are often used to articulate the revolutionary ideas throughout the subcontinent. 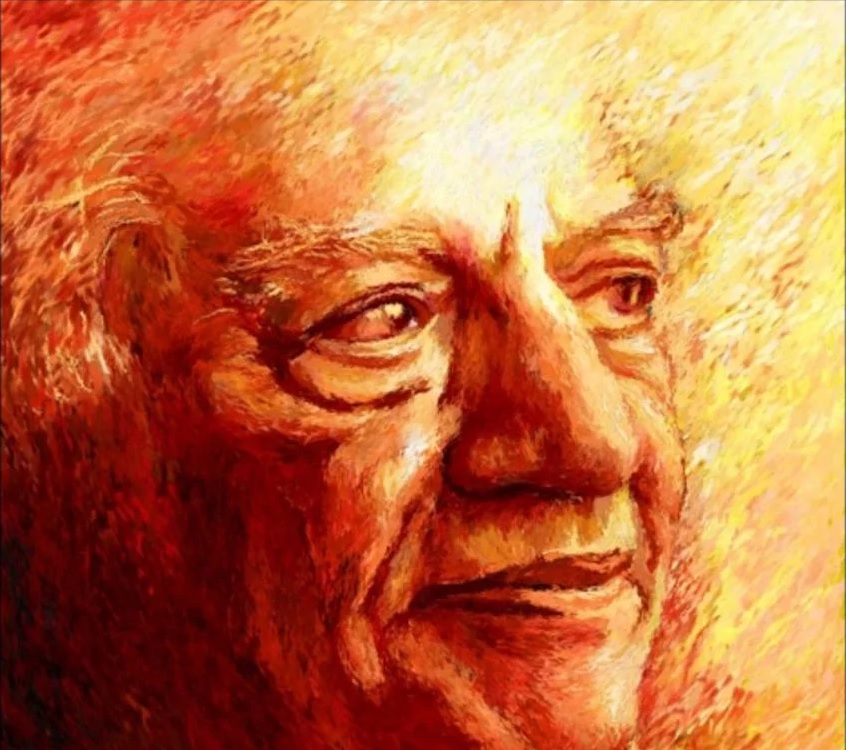 Let us analyse the iconic and popular poem ‘hum dekhenge’.

[We shall Witness
It is certain that we too, shall witness
the day that has been promised
of which has been written on the slate of eternity]

Anyone who is acquainted with the basics of Quranic discourse, knows the meaning of the term ‘lauh e azal’. It has been used in Quran to refer to the eternal slate on which the destiny of the whole universe from start to end has been recorded. Besides, the slate metaphor is used for the Quran to refer to itself, ‘lauh e mahfooz’ or the protected slate.

In this introductory phase, Faiz is declaring that we are to witness that day which has been promised in the eternal slate. One might ask: promised by whom, and promised where? Promised by God, and promised in Quran. This is made explicit by the following stanzas:

[When the enormous mountains of tyranny
blow away like cotton.
Under our feet- the feet of the oppressed-
when the earth will pulsate deafeningly
and on the heads of our rulers
when lightning will strike]

The mountains blow away like cotton, the earth shaking under the feet of humans, or lightning striking the heads: all three are prominent Qur’anic tropes while describing the inevitable doomsday, which precedes the judgment day.

It is the Day when people will be like moths, dispersed;  and the mountains will be like wool, fluffed up. [Quran 101:4-5]

When the earth is shaken with its earthquake, and the earth discharges its burdens, and man says, “what is with it?” [Quran 99:1-3]

[From the abode of God
When icons of falsehood will be taken out,
When we- the faithful- who have been barred out of sacred places
will be seated on high cushions
When the crowns will be tossed,
When the thrones will be brought down.]

In this paragraph, Faiz uses the image of a victorious Prophet Mohammad emptying Kaaba of hundreds of idols after the conquest of Makkah towards the end of his prophetic career. The term ‘mardood e haram’, i.e. barred out of sacred places, refers to Mohammad and his companion who were forced to leave Makkah 8 years earlier, because of the Islamic rejection of idolatry. The ‘mardood e haram’ finally defeat the Meccan idolaters, come back to the Haram [kaaba], and purify it from idols.

The connections are obvious between the basic Islamic slogan ‘la ilaha illa alla’ [no deity but the deity] and Faiz’s imagination of an idol-less world, where those who have been most oppressed by the false deities such as crowns, thrones etc. will finally be vindicated. This idol metaphor has been used in similar ways throughout the revolutionary Urdu poetry, for instance, Iqbal invites the Muslims to break the modern idols of Nationalism, Capitalism etc.

[of all these recent deities, the nation is the greatest,
and the cloth that makes its clothes is the shroud of religion]

Now lets come back to the last stanza of hum dekhenge:

Faiz comes back to the issue of finitude of humans and their societies, and reminds us that besides God, every other entity is going to perish. Following the traditional Islamic discourse, Faiz defines Allah through contradictions, [cannot be seen but is also present], or [who is both the spectacle and the beholder].

The poets of Islam, if one goes through a long list across languages, have taken the basic Islamic slogan of tauheed [monotheism] as the central idea, and have praised Muhammad as the greatest revolutionary, and Hussain as the greatest martyr of human history. Belief in tauheed entails rejection of deities and superstition, and hence it is incumbent on a believer to destroy the false deities like race, class and images. In other words, tauheed defines the ideal by negation. When confronted with the Marxist ideas in post-1917 world, these poets incorporate leftist ideas such as class struggle etc., into their thought and poetry.

Some like Iqbal, whom Faiz considers the last Islamic thinker of his age, engage on the level of ideas with Marxist thinkers and prepare the base for others who follow. Others like Faiz and Hasrat, one of the founders of Communist Party of India, cooperate with Marxists very closely, and were active members of Communist parties.

When asked why he supported communist movements in Pakistan inspired by USSR or China, he explained it by pointing out that although Islamic systems are superior to Communism, no Muslim country currently follows a better implementation than the regimes in USSR and China. However, if the Islamic systems are implemented in its true revolutionary spirit, or its faulty implementation is reformed, then results better than the Communist regimes can be achieved.

Faiz was a self-declared Muslim poet. He was brought up in a Muslim family, and trained in Islamic discourses early on in his life. He started memorizing Quran, but had to give it up because of health issues, something that he regretted throughout his life. His declared murshid, i.e. spiritual and philosophical guide, was the legendary Muslim scholar and poet Maulana Rum or Rumi. His poetry is imbued with Islamic themes, goals, allegories and metaphors.

The famous poet Qateel Shifai asked Faiz about it in an interview:

In Rudaad e Qafas, Major Ishaq, who was a companion of Faiz, mentions that when they were jailed together, Faiz famously taught Quran and Hadees to the prisoners in the Hyderabad jail. Faiz himself mentions that a colonel explicitly asked him, why he was teaching Quran when he was an atheist. When Faiz clarifies that he is a Muslim, the colonel starts appreciating his Quranic lessons.

His support for the Palestinian cause, which was expressed in Quranic terms [qad jaa al haq wa zahaq al baatil: the truth has arrived, and falsehood perished], his praise for the Iranian students who were bleeding for an Islamic revolution, and his ode to Prophet Muhammad which is his only Persian poem, his grand elegy for Hussain: all stand witness to the centrality of Islamic thought in Faiz’s poetry and his revolutionary spirit.

An illusion has been created over time, where Faiz is considered an atheist poet, who has no relation with Islam. This was done by the conservative Muslims, who wanted to dent his legitimacy among Muslims. The conservative and literalist Muslims were not afraid of non-Muslim revolutionary thinkers, they are always more afraid of revolutionary trends within Islam, and hence, the declaration that Faiz is a kafir or a dahri (i.e. atheist).

It is unfortunate that this orthodox Muslim propaganda has succeeded in convincing many Muslims as well as many progressive and liberal circles in the subcontinent that Faiz was indeed an atheist, or at least his revolutionary ideas had nothing to do with Islam. It is high time that this distortion should be rectified.

-by Sharjeel Imam and Saquib Salim (authors were pursuing their M.Phil at the Centre for Historical Studies, JNU, Delhi at the time of writing).

(This article was published on sabrangindia.in on February 4, 2017 and has been reproduced here in full.)

Faiz’s poem Hum dekhenge has become quite popular with those involved in the anti-CAA protests. It is being touted as a non-partisan symbol of ‘resistance’ against a ‘fascist’ government. When a faculty member objected to the poem being read out in IIT Kanpur claiming its contents are offensive to Hindus, left-liberals went ballistic and abused those opposed to the poem as ‘culturally illiterate sanghis’.

We have reproduced the above article with the intention of letting the reader judge for themselves whether a poem like ‘Hum Dekhenge’ is apt in a secular country where ‘idol worship’ (an incorrect, though popular, English translation of murti puja) is practised by many.