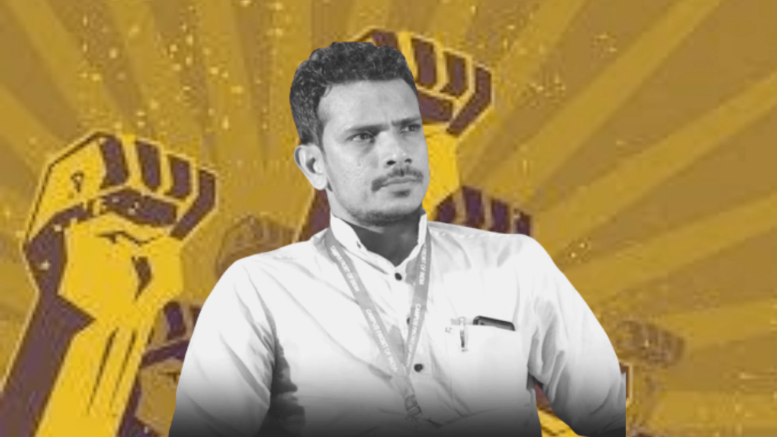 Sajid Bin Sayed, National President of CFI (Campus Front of India) that is behind the manufactured hijab row, has no qualms in calling the Bharatiya Army “Kashmir genocider” and believes it is his fundamental right to do so!

Abusing constitutional privileges such as freedom of speech to promote seditious thoughts has long been the strategy of Islamo-leftists. That Sayed comes from JNU, the home ground of the ‘tukde-tukde’ gang, isn’t surprising either.

In July 2020 Sayed was booked under sections 153A IPC (Promoting enmity between different groups on grounds of religion, race, place of birth, residence, language, etc., and doing acts prejudicial to maintenance of harmony) and 504 IPC (Intentional insult with intent to provoke breach of the peace) for his tweet citing “BJP’s territorial greed” as the reason for the repeal of Article 370.

In the same tweet, he says “Indian military execute systemic genocide of Kashmiris”. He had even accused the Centre of plotting ethnic cleansing.

Such false accusations have been oftentimes made by Islamo-leftists in an attempt to divert attention from the crimes of the terrorist outfits. Dissent is used by people like Sayed as a convenient tool but one would never see them speaking about the rights of Kashmiri Pandits, whose genocide at the hands of jihadi outfits, they are trying to white-wash.

For one who believes making seditious statements is his constitutional right, Sayed sure exposes his hypocrisy when he questions the apex court decision in the Sri Ram Janmabhoomi case. Islamo-leftists respect the judiciary and constitution as long as it sits in with their propaganda.

The views of Sayed give away the current plot of the CFI/PFI in destabilizing the country and bringing in the ‘minorities not safe in under Hindu Modi’ narrative. The Hijab row is the latest in a series of propaganda where the CFI is radicalizing campuses across the country.

As Hindu Jagaran Vedike (HJV) had pointed out “Hijab controversy is an experimental plan of Islamization of India. It challenges the unity and integrity of the country and poses a grave danger. Therefore it should be nipped in the bud without allowing it to grow further. It is the responsibility of the central and state governments. This is a foul play by fundamentalist powers who dream of Islamization. Such an environment had also been created during the CAA times. It is dangerous to say that they have the right to live as per the Shariat, Quran, Hadith, etc, and follow the guidelines given there. It clearly shows that Islamic fundamentalism is getting sprouted here”.

The PFI hand in anti-Hindu Delhi riots as well as funding the Congress ecosystem has come to light. The role of the radical Islamist outfit in the Hathras case is also well known. Similarly, the fact that PFI is hand-in-glove with opposition parties such as Congress and TMC fits in with the Bharatiya political jigsaw puzzle. While the opposition wants Modi out of power, PFI/CFI aims to push for the Islamization of Bharat which would be easier with ‘secular’ parties in the driving seat in Delhi.