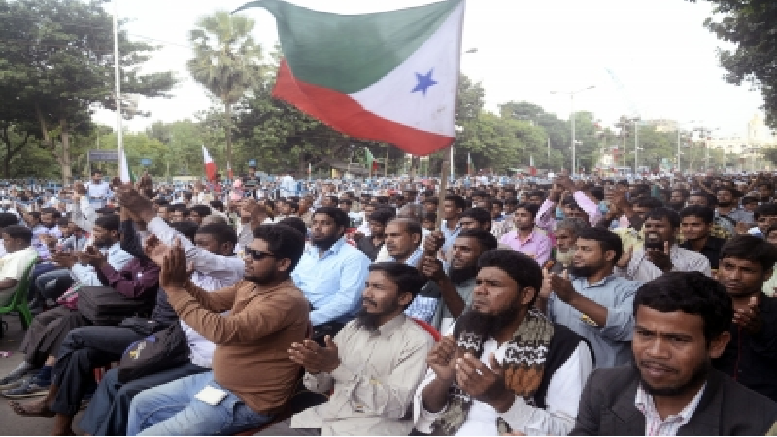 The Uttar Pradesh Special Task Force (UP STF) has filed a charge sheet against eight members of Popular Front of India (PFI), including a journalist before a Mathura court.

The 5,000-page charge sheet filed on Saturday, said that the accused received funds from abroad to incite caste riots in Hathras, following the alleged gang rape of 19-year-old girl which led to her death in September 2020.

The charge sheet has been accepted and the court has fixed May 1 as the next date of hearing.

In the 5,000-page charge sheet, the PFI members, identified as Atiq-ur-Rahman, journalist Siddique Kappan, Masud Ahmad, Alam, Anshad Badruddin, Firoz Khan, Danish and Rauf Sharif, have been accused of receiving funds to the tune of Rs 80 lakh from financial institutions in Muscat and Doha for the purpose.

Atiq-ur-Rahman, Siddique Kappan, Masud Ahmad and Alam were arrested by the STF from Mathura on October 5, 2020, while Rauf Sherif, general secretary of the Campus Front of India, the student wing of PFI, was arrested in December from the Trivandrum airport.

Anshad Badruddin and Firoz Khan were arrested by the STF from Lucknow on February 15 while Danish is under arrest in Delhi for his alleged role in the 2020 riots.

“All the above named PFI members have been booked under the charges of sedition, wantonly giving provocation with intent to cause riot, injuring or defiling place of worship with intent to insult the religion of any group, Information Technology Act, along with charges of punishment for raising funds for terrorist acts and the Unlawful Activities Prevention Act (UAPA),” said an STF official.

The charge sheet says material collected from cell phones and laptops of the accused, corroborate that they were trying to spread disharmony in the state by raking up crime incidents that took place in Hathras.

Documents were collected during searches at the office of PFI in Delhi and evidence was found.

ADG (law and order) Prashant Kumar confirmed that a charge sheet was submitted but a probe in the case was still underway.

Masud is the general secretary of the Delhi state PFI and was in regular touch with Sherif. He also received money in his bank accounts, the charge sheet says.

Similarly, Siddique Kappan also transferred funds to the bank account of Atiq-ur-Rehman. Mohammed Alam, was driving the car bought in the name of Masud. He took an active part in a conspiracy hatched by Sherif.

Public prosecutor Shiv Ram Singh said that Alam’s brother-in-law Danish has also been named in the conspiracy case. Danish is in the custody of the Delhi Police for his alleged role in riots in north-east Delhi in January 2020.

The STF also said that incriminating evidence was recovered from laptops and mobile phones of the accused.

Besides, the cash trail has also been established during and before the period of Hathras case and statements made by the accused also corroborate with the findings.

In February, the ED had also filed a charge sheet against the four PFI members for getting finances from abroad to help their alleged bid to disturb communal harmony in Hathras.