“Dalit” Lies Matter : Did English say that Brahmins have no “judicious character”? 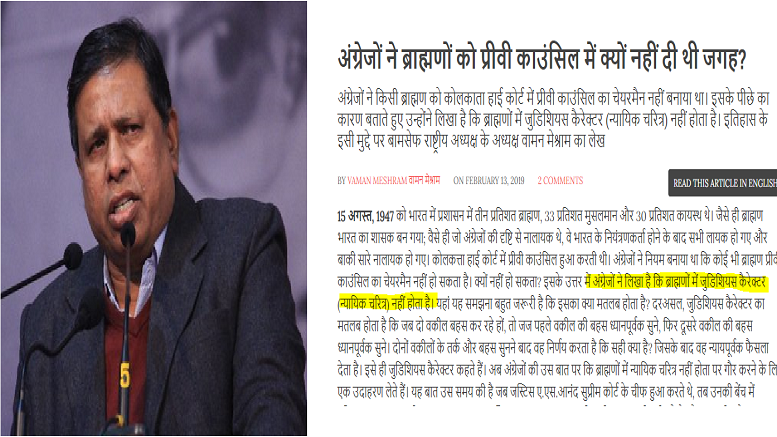 Dalit politics in Bharat has been at the margins of discourse till very recently. The forms of organisation, funding, mobilization and popularization of agenda items has been almost completely invisible to non SC citizens. This has also meant an almost nil scrutiny of their propaganda by the mainstream media, scholars or society. As a result, things that are blatantly false and target mainstream Hindus, specially Brahmins are quite common in “Dalit Bahujan” discourse.

A prominent organisation that indulges in such Brahmin bashing is Vaman Meshram led  Backward and Minority Communities Employees Federation or BAMCEF. This organisation and its leaders spread their ideology through various newsportals, magazines and Youtube channels. As the members of this organisation are government servants , who are considered leaders of the community, it sets the tone for the narrative. Meshram has spread many canards about Brahmins for the express purpose of vilification of the community. This includes the fake narratives that Brahmins killed Chatrapati Sambhaji and Dr. B. R. Ambedkar! They also do fake translations of Sanskrit mantras to denigrate Hindu Dharma. However, much of this is in vernacular languages and is rarely read by those outside of target groups. Let us take an example.

An oft repeated “fact” in these circles is that Brahmins cannot be trusted, as they only think of their own caste. Casteist as this statement is, this “fact” is justified by another “fact” that Brahmins were termed as “lacking judicious character” by the British and therefore not made judges! Now, this second fact, though untrue, shows a colonised mind, and also gives a sort of “higher validity” to the proposition. It saves “the Dalit” from applying her mind and tells her that if British thought that, it must be true.

Take at look at this article by Vaman Meshram himself in “Forward Press”, which propagates a slightly sophisticated version of this lie. He starts by saying that in 1947, the administrative services of Bharat had only 3% Brahmins. Now, there is no reference to this, but let us not dispute this “fact”. Meshram should tell us on which basis, then, the “5000 year domination” of Brahmins is claimed?

Let us ignore this contradiction and move ahead. Meshram further says that there was a Privy Council in Calcutta High Court. According to Meshram, the British made a rule that no Brahmin can be Chairman of Privy Council as “Brahmins lack judicious character”. Then he goes on a long rant on how Brahmins are never impartial and Brahmin judges need to be hit with shoes to make them impartial! He also gives fake data saying 582 out of 600 i.e  97% of judges in High Courts of Bharat are Brahmins and also exhorts the “Moolnivasis” to tell Brahmins to leave Bharat!

What is the truth?

Unfortunately, many people do believe in the lies of Meshram and his ilk. For them, Brahmins are untermensch, foreigners and would be dealt with on the streets, as and when they have the upper hand.

The above article of Meshram is without an iota of truth! There was never a Privy Council in Calcatta High Court! There indeed was a Privy Council in London. However, any Bharatiya was rarely appointed to that council. In fact, Lord Swaraj Paul was the first person of Bharatiya descent to be appointed to it in 2009. Maybe, Meshram confuses it with the Judicial Committee of the Privy Council, which was the highest court of appeal for inhabitants of Bharat till 1950. Even there, Bharatiyas were rarely appointed. However at least two of those who were appointed, Tej Bahadur Sapru and V. S. Srinivas Sastri were Brahmins.

About the Brahmins having 582 out of 600 posts in High Court, i.e. only 18 being non Brahmins, one can just check the list of current judges of Allahabad High Court. Most of the 95 are non-Brahmins at the first look. Clearly, Meshram is making up facts to construct an imaginary enemy in the minds of his followers.

Meshram and his ilk have constructed such an edifice of lies that it would take hundreds of articles to bust them all. Such lies are readily believed by his followers and shared on their own social media, Youtube channels and news portals.

It is not easy to confront them as the danger of SC-ST Atrocities act is always on the heads of people who dare to counter them. However, it is also important that such lies are busted regularly and ruthlessly. It is the responsibility of wider Hindu samaj that the new generation of Scheduled Caste are weaned off this toxic propaganda and made a part of the mainstream.