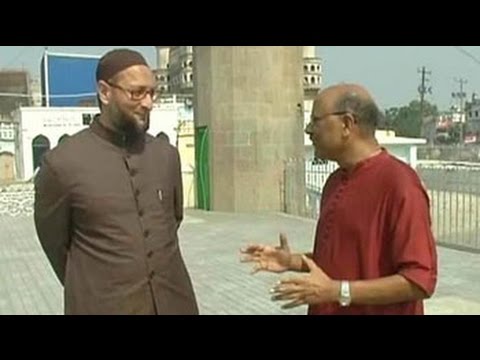 Asaduddin Owaisi, President of the All India Majlis-e-Ittehadul Muslimeen (AIMIM) party and Lok Sabha MP from Hyderabad, said in a speech on Friday night that when we decide to wear our color green (which along with black is considered as one of the traditional colors of Islam), no other color in the country will be able to stand before it.

Exact translation of his words: “We don’t care when you do it, but when we wear green, we will color everything green…insha allah. And no other color will stand before our green insha allah, neither Modi’s color, or Congress’…no one else, but only our green will be there..green, green, green…”

While Owaisi apologists, and there are many within our intelligentsia who project Owaisi as a ‘progressive’ Muslim leader, judicious observers on social media saw Owaisi’s rhetoric for what it really is-

This is a clear threat to Islamise India. A democracy which allows such a bigot to contest elections is a failure https://t.co/IOd0tt4ybY

The highly educated, articulate Asaduddin Owaisi has earlier referred to police as ‘khatmal‘ (bedbug), and his MLA brother Akbaruddin Owaisi has issued chilling threats such as “remove police for 15 minutes so 25 crore Muslims can teach 100 crore Hindus a lesson”

Asaduddin Owaisi, standing in Lok Sabha, had also threatened the country with a ‘third wave’ of Muslim radicalization over the 2013 Assam riots.

Recently, it was reported that ‘Pakistan Zindabad’ (long live Pakistan) slogans were raised at a bike rally in support of AIMIM candidate for a municipal election in Ghaziabad, UP. When a Muslim man Gulchaman Sherwani was being ostracised by his fellow Muslims of an Agra neigborhood, due to his love for  the country’s national song Vande Mataram and the tricolor, the President of AIMIM’s Agra unit justified the act as being prescribed under the Shariah for reciting Vande Mataram.

The Nizam was opposed to the integration of his princely state of Hyderabad with the Union of Bharat in 1947, and apart from his formal Army, he funded a private Muslim militia led by one Qasim Razvi – The Razakars – to oppose Hyderabad’s merger with Bharat. The Razakars, as is well documented, triggered a wave of murderous attacks on Hindus, Muslim intelletuals and Communists. They were finally defeated by the security forces of Bharat in ‘Operation Polo’ initiated by Home minister Sardar Valabhai Patel in September 1948, but not before they had raped and murdered tens of thousands of innocent civilians.

Today, the Razakar ideology lives on in the form of the political party AIMIM (All India Majlis-e-Ittehadul Muslimeen) which was led by Qasim Razvi from 1944 to 1957, and is today led by MP Asauddin Owaisi and his MLA brother Akbaruddin Owaisi.

Owaisis have close relations with the Nizam’s family, and their rabid hate-mongering towards Hindus is evident from speeches like this where Akbaruddin had abused Hindus and Hindu practises like worshipping different gods, cremation etc., justified Islamic terror attacks and illegal Bangladeshi immigration, and also threatened to wipe out Hindus from Bharat if police were removed for 15 minutes. Akbaruddin Owaisi has also exhorted Muslim youth to “take law into your own hands, and later come to me – I will protect you.”

Yet, the suave rabble rouser Asaduddin Owaisi is glorified by our secular media icons as a modern, emerging Muslim leader –