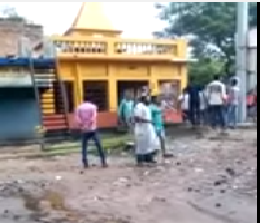 The Basirhat riot has been downplayed as ‘low-intensity’ and something ‘blown out of proportion’ by many fiberal news outlets. While the 16-year-old juvenile whose Facebook post allegedly set off the riots has been widely named and shamed by these outlets, in clear contravention of the law, not much has been reported about the way in which Hindu temples, shops and houses were systematically attacked in the initial phase of the riot.

A video has now emerged, courtesy human rights organization Hindu Samhati, which shows a Hindu temple in Aamtala, Dandirhat (near Basirhat) being ransacked by a Muslim mob.

Two other points expose the hypocrisy of those who would prefer that riots like Basirhat remain hidden from public view, like in the good old days before the advent of social media and democratization of discourse.

In all the communal disturbances that West Bengal has witnessed in recent years due to the brazen appeasement of Islamist elements by Mamta Banerjee, one organization that has stood firmly to defend Hindu interests and provide succour to the poor and oppressed Hindu population is Hindu Samhati. Hence it was no surprise that Hindu Samhati activists were special targets of jihadi mobs during the Basirhat rioting.

We are sharing some photos of a shop belonging to a Hindu Samhati activist that was destroyed in the Baduria-Basirhat riots. This particular activist (whose face has been masked to protect his identity) displayed exemplary courage in defending Hindus from the Islamist mob attacks that came in waves day-and-night.

The Hindu Samhati activist’s own shop in the market was specifically targeted, completely looted, ransacked and systematically destroyed by a Muslim mob. The shop had a large merchandise of clothes (both men’s and women’s clothing). Now he is completely bankrupt and without any business/income. The estimated loss is Rupees 7.5 Lakhs to Rupees 8 Lakhs.

As the shop is located far from his house, he was not able to save it when it was attacked late at night – it is alleged that the shop was ransacked and looted by the Muslim mob while WB police stood watching. He is the sole breadwinner of his family comprising his elderly parents, wife and a two year old son.

Now, Hindu Samhati is organizing immediate relief for this man’s family as WB administration is completely oblivious to plight of such Hindus who stand up for themselves. We request our readers to contribute equally to this cause by donating to Hindu Samhati. For more details regarding how you can help this specific Hindu Samhati activist, you can reach out to senior HS activist Prasun Maitra (email: [email protected], phone: +91-9038762393)

(We thank @prasunmaitra for speaking to HinduPost)