Just a couple of days back, the VHP Gau Raksha ( cow protection ) Chief of Vidarbha region in Maharashtra and his team were threatened by a group of people, mostly Muslims, after the former saved & freed about 100 cruelly tied up cows with the help of policemen.

VHP & Bajrang Dal members had come to know about 100 cows being made to walk towards Laalkhadi in cruelly tied-up condition. So they reached the spot with 2 policemen. Seeing the policemen, the 4 persons who were making the cows walk, ran away.

As the cows were being untied, local Muslims started gathering and rounded up VHP Gau Raksha Chief, Sh. Vijay Sharma and his team. As reported to us, Sh. Vijay Sharma was threatened with dire consequences if he continues to work towards protecting cows. One of the persons who were threatening yelled ‘Bahot ho gaya, ab wicket girana padega‘ (Enough has happened, now a wicket has to be brought down). In just a few minutes, about 100 to 150 locals gathered around Sh. Vijay Sharma and team. The 2 policemen had to call up more police force. Fortunately, police arrived quickly and the crowd dispersed. The news has been covered in local Hindi media : 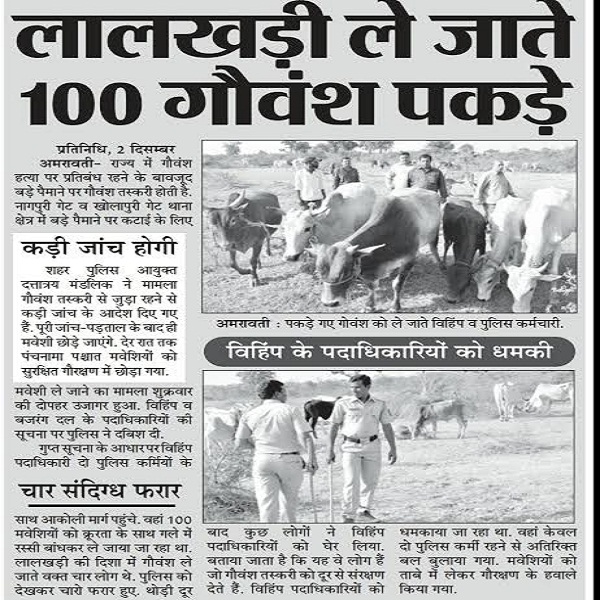 It seems that some of the people in the crowd were carrying swords. But no violence took place. Noone has been arrested from the crowd which issued threats. About 3 years back also, Sh. Vijay Sharma had faced a serious threat.

Some of the exclusive pictures of this rescue incident :

This is not the first time we have reported about threats faced by cow protection activists, or about rampant cow trafficking and rescues that happen.

The Maharashtra Animal Preservation Act, 1976 governs the slaughter of cattle in the state. Slaughter of cows, bulls and bullocks & their transport for the purpose of slaughter is not allowed in Maharashtra. Anyone violating the law can be punished with imprisonment up to 5 years and/or fine of up to Rs. 10,000.

Further the The Transport of Animals Rules,1978 states that trucks shall not carry more than six cattle, and that during transportation animals should be protected from weather, sufficient food and water must be provided to them, and padding (straw etc) should be placed on the floor. The Prevention of Cruelty to Animals Act, 1960 also outlaws over-loading and torturing of animals.

(We thank Karan Sharma for speaking to us and providing images).