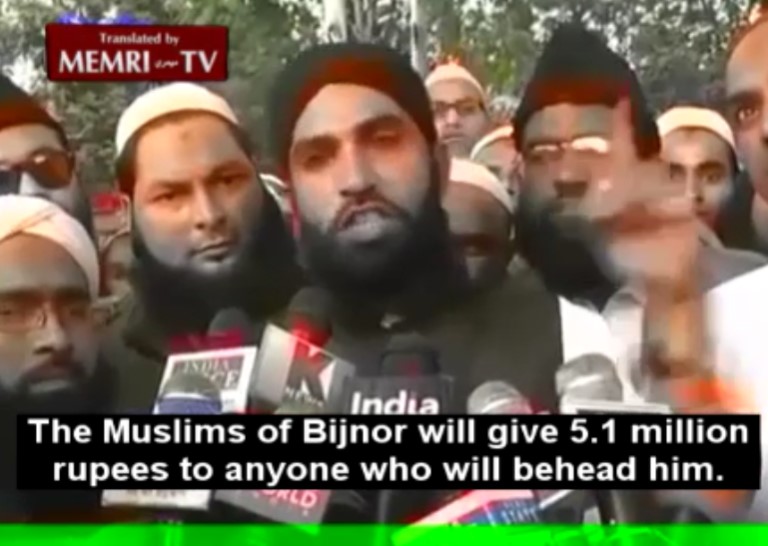 Maulana Anwarul Haq, the head Imam of Jama Masjid in Bijnor UP, has been booked for raping a woman. He was one of several Muslim leaders who had called for Kamlesh Tiwari to be ‘beheaded’ for alleged objectionable remarks against the prophet of Islam.

“The imam was caught by the husband and neighbours of the victim, whom he had been raping on the pretext of “rescuing her from evil spirits”.

According to police, the victim’s husband had approached the imam to cure the woman who was ill for months. Haq told them that the woman was possessed by evil spirits and some special rituals needed to be performed at Kaliyar Sharif dargah in Haridwar.

While they were staying in a hotel in Haridwar, Haq called the victim to his room, for performing the rituals and raped her. Even after returning from Haridwar, Haq tried to rape her, while her husband was not at home.

The incident happened on August 19, after Haq and his associate Khurram reached the woman’s house. While the cleric was inside, the husband arrived. Realising something was wrong he alerted the neighbours who gathered at the house and started beating up Haq and Khurram.

While the family did not file a police complaint, the Iman started putting pressure on them to return some video clips and images locals shot that day.

After they refused to hand them over, Haq went to the police claiming that they had misbehaved with his wife and snatched her jewellery. The rape incident came to light only after police summoned the victim’s husband for questioning.

Haq had earlier courted headlines after he announced a reward for anyone who would behead RSS leader Kamlesh Tiwari for his provocative remark on Prophet Muhammad.”

HinduPost note: The IndiaTimes (a Times of India group company) reporter Bobin Abrahams has labeled Kamlesh Tiwari as an ‘RSS leader’ – this is false. Kamlesh Tiwari was initially reported to be a Hindu Mahasabha leader, but later even the Mahasabha denied he is their member. After UP cabinet minister Azam Khan had called RSS members homosexuals, it is said that Tiwari had shot back with his remarks in a private meeting. However, he has been in jail  for the last 9 months under draconian NSA act, after UP police claimed he issued a ‘press note’ with objectionable comments – read our report to understand the details of this case.

After receiving a sound thrashing at the hands of locals, the Imam was left licking his wounds, but soon found his voice when he issued an open threat to UP police and Government-

Transcript of above video: “The district and state administration know us very well. If I dont get justice, I will unleash havoc (inth se inth baja denge) on the district administration. My name is Anwarul Haq, and I am known to everyone from district administration to CM Akhilesh Yadav. SP (Superintendent of Police), listen to me silently – I want justice or else I can get the stars removed from your chest. Those people tortured me for 3 hours, held a knife to my wife…does all this seem false? Once I recover, I will see everyone.”

Given how UP has turned lawless under the SP regime which has given a free hand to Muslim fundamentalists and criminal gangs, Haq’s threats are credible.

This is the chilling announcement this same Maulana Anwarul Haq had made in Dec 2015 offering Rs. 51 lakh for anyone who beheads Kamlesh Tiwari. He said, “If UP Government and our courts do not punish Tiwari, the Muslims of Bijnore offer Rs 51 lakhs to anyone who beheads Tiwari. Anyone who abuses any religion, whether it is Islam or Hindu Dharma, they will not be spared. Kamlesh Tiwari, let me warn you – whether you are in jail or outside, if the courts do not punish you, Muslims of Bharat will mete out their own punishment.”

But it is a travesty of the State of Bharat today that people like Haq who openly defy the Constitution and Courts of Bharat and incite people to murder, are walking free, while Kamlesh Tiwari is rotting in jail despite the Government not being able to provide credible proof against him.

Islamic bigots like Haq usually couch their fascism by claiming they are against abuse/criticism of all religions. But their facade crumbles the moment someone points out that the Islamic religion they preach in mosques and madarssas labels anyone who doesn’t believe in their idea of the ‘one true God’ i.e Allah as destined to burn for ever in hellfire, and labels idol worshippers (Hindus) as the biggest sinners. It is hate spewing mullahs like Anwarul Haq who spawn young Muslims like SP worker Nadeem Nambardar who had commented on Facebook:

Contrast the demand of Muslim fundamentalists across Bharat for a sharia style punishment to Kamlesh Tiwari – beheading, with the peaceful criticism & legal activism of Hindus when they encounter someone trashing their religion based on misinterpretation and distortion – isn’t a Dinanath Batra filing a case against Wendy Doniger for her Hindu-bashing book ‘The Hindus: An Alternative History’ which contained quotes like “Vedic reverence for violence”, better than a Anwarul Haq calling for the medieval beheading of a blasphemer?