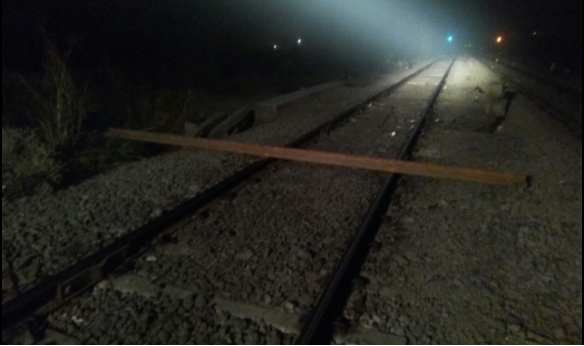 Two more shocking cases of railway track sabotage have been reported in the last 48 hours. In both cases, major tragedies were averted due to alertness of railway patrolling staff and the train driver.

While the earlier cases of sabotage in the last few months involved cutting the tracks with gas cutter and removing fish plates, or placing improvised explosive devices, the new modus operandi is much simpler but equally deadly – placing stone/iron slabs on the track.

One sabotage attempt occurred last night near Diva station, Mumbai when a 15 feet long rail piece was put on the track. Drivers of the 12052 Janshatabdi Express stopped the train in time –

The other disaster was averted near Samastipur in Bihar when two railway patrolmen found two stone slabs, each around one meter long, kept on the UP Line track on minor bridge no. 20. When the patrolmen tried to remove the slabs, 3-4 persons who were hiding came out and started abusing them. The patrolmen then rushed to inform the Dalsinghsarai RPF post, GRP and local police.

1/ Major Train Accident averted near Samastipur in Bihar due to the alertness of Patrolling Staff of Railways. pic.twitter.com/xaUNBrwdqS

The worst train tragedy in recent memory occurred on November 20, 2016, when 147 people died while over 180 were injured after 14 coaches of Patna-Indore Express derailed in Kanpur Dehat district, UP. Three men were arrested by Bihar police for their involvement in this train accident – they have confessed to working at the behest of Pakistan’s ISI via handlers in Nepal and Dubai. Nepal police have also arrested one man who has corroborated this confession.

Requesting all to be extra vigilant to foil nefarious designs of these anti people elements trying to subvert system,dastardly inhuman acts https://t.co/mAx7rgw4t9

But what is most shocking is the almost complete silence in MSM on these murderous terrorist attempts which threaten the vast rail network used by millions of Bharatiyas daily. The same media which should be carrying news of these dastardly attacks to the common people to raise awareness and put pressure on the terror network behind this, instead seems to be waiting for accidents to occur so they can take potshots at the Rail Minister and by extension the Modi Government.

It does not take rocket science to deduce the mastermind behind these spate of sabotage attempts – Pakistan’s ISI. Bharat has long been at the receiving end of a 30-year-old jihad waged by the State of Pakistan under their ‘death by a 1000 cuts’ doctrine, and the chief enforcer of this dastardly terror strategy is Pakistan’s premier spy agency ISI. What started as cross-border infiltration by trained terrorists evolved to bomb blasts carried out in connivance with underworld criminals, nurturing terror outfits within Bharat like SIMI and IM (Indian Mujahideen), serial blasts on trains/ public places etc, terror attacks by gunmen who came from Pakistan via boats – ISI has shown that it is a deadly foe with zero moral limits and with constantly evolving tactics.

Seeing the spate of ISI and ISIS modules that security agencies have busted since the Modi Government came to power, it is likely that ISI and their supporters within Bharat have realized that it is too risky to build organized terror modules and then arm them with sophisticated weapons. Rather, they have decided to opt for simple, low-risk terror tactics like sabotaging rail lines. Even in Europe, we have seen how terror groups have opted to strike using lone wolves who crash buses into innocent civilians or attack with knives etc.

It is also possible that there are radical Islamist & Maoist elements within Bharat who are acting out of their own volition copying the ISI tactics – this has to be tackled by clamping down on Wahabbi/Salafi radicalization in madrassa/mosques across the nation which has seen a huge increase during the UPA era.

Better surveillance by railways and security agencies, vigilance by citizens and quick, severe punishment to the perpetrators is one part of tackling this terror threat. The only permanent solution is to take the fight to the enemy’s doorstep. Bharat has taken the first important step in that direction through the Sept 2016 surgical strikes conducted against terrorist camps in PoK – it was a welcome move that junked the failed ‘strategic restraint’ theory peddled by Lutyens’ insiders. But as expected, that one act was never going to be enough to deter the evil deep state in Pakistan which is controlled by fantical Islamist fundamentalists. We need a sustained campaign to target the Pakistani deep state inside their homes to make them realize the costs associated with promoting terror in Bharat.

And obviously, we need to snap all ties with Pakistan and declare it as a terrorist state to send a clear signal to the global community that we mean business.Anything short of this is just beating around the bush and setting ourselves up for more confused knee-jerk reactions.The world did not defeat Nazi Germany through half-baked measures or Neville Chamberlain type appeasement. It is time to claim the higher moral ground and deal with Pakistan like the evil, Islamo-fascist nation it is.