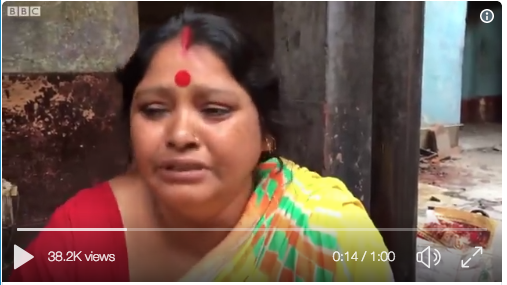 While most mainstream media outlets from Bharat have blacked out detailed coverage of the fear & terror in Hindus of Bengal following the recent rioting in Asansol and Raniganj, a short video report by BBC Hindi shows the ferocity of the attack and the utter devastation of affected Hindu families –

BBC reports, what our veteran patrakaars are denying. Hindu women tell BBC reporter, how their houses and shops were burnt down by peaceful mobs while West Bengal police played a mute spectator. pic.twitter.com/pBewyrxbhA

The transcript of the above video is as below:

The lady, Mita Chowdhary, at the beginning of the video says that a man (possibly police?) told her to take her possessions and flee from her house, but she asks where should we go along with our children…this is our home! Sapna Chowdhary says that the place where her joint family used to live, their house as well as shop have been burnt down. They had to flee on the night of 27th February to save their lives. On the afternoon of 28th, between 12 – 1 PM, their shop was looted and burnt. After that, the mob broke into their house around 6 PM and set it on fire after looting goods worth Rs. 60-70 lakhs. “We have been evicted from our own homes and have nowhere to go, everything has been snatched from us,” she says.

Soni Devi says that she was cooking dinner and was planning to leave soon, but suddenly stones and bricks started falling on her house. She got scared on how she would live alone with her child, so she immediately locked her house and fled. Her daughter, a student of Class X is crying for her books. “Please help us, support us...I have nothing left, not even to eat or wear. We do some sewing work to get by, my husband also doesn’t have a job,” she says.

Sapna Chowdhary says, “Police was standing by as our shop was being looted and burnt. When we appeal to police, they say they don’t have orders from above to act, their guns are useless. So what was the police doing standing here? Just being a spectator to the loot…was police on our side, or of the rioters? I want to ask the Government – what is the use of the administrative power at their disposal?”

Our corrupt intellectual elite & Islamist-apologists are trying to spin this anti-Hindu rioting in Bengal as a localized outbreak triggered by Ram Navami processioners. They are saying that as only 4 people have died as per official records, the scale of rioting doesn’t deserve the same attention as the Gujarat riots of 2002 where 1044 died as per official records. But what their chicanery hides is the fact that the Gujarat riots were a spontaneous backlash to the pre-planned, brutal act of burning alive 59 Hindu pilgrims in S-6 coach of Sabarmati Express; that Gujarat police shot dead many rioters; that the Gujarat Government requested help from neighbouring states & centre and even called out the Army.

What was the trigger for this organized violence? A Ram Navami rally with some loud slogans? And how did the state respond?

In the case of the Raniganj and Asansol riots, the state Government totally abdicated its responsibility – the CM was actually politicking in Delhi while her state was burning. In fact, Mamata Banerjee appears to have directed her police to stand by and allow Islamist rioters to terrorize Hindus – to issue a veiled warning to Hindus to remain loyal to TMC and avoid Ram Navami rallies, perhaps?

Every time Hindus are squeezed out or religiously cleansed from a region – whether it is Kashmir, Kairana, parts of North East, or now Raniganj/Asansol – some kind of conspiracy theory is invented by the secular cabal to obfuscate the matter. In Kashmir, it was Governor Jagmohan who was presented as the ‘scheming Hindu’ mastermind who tried to defame ‘innocent Muslims’ by manufacturing a Kashmiri Pandit exodus, while at other times any violence against Hindus is blamed on ‘BJP/RSS communalization’.

Clueless urban Hindus either fall for such propaganda or don’t care given their secular conditioning. But unless we wake up and identify with poor Hindu victims of such violence, one day the fire will reach our own homes – irrespective of our living today in the safe environs of Mumbai, Delhi, Kolkata or Bengaluru.