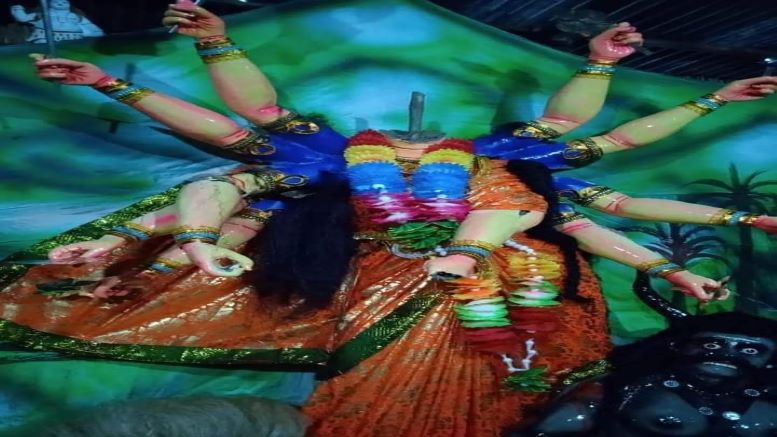 A Navaratri Puja Pandal was attacked and the murtis of Hindu Devis and Devatas were vandalized on 21st October in Bangladesh’s Boalmari Upazila of Faridpur. Reports state that Nayan Sheikh and Raju Mridha belonging to Ramdia village have been arrested by the police in connection with this case.

According to the Ramdia Karmakar Para Puja Mandap Committee President Suresh Chandra Karmakar, the incident occurred at around 8.30 on the night of 21st just ahead of the Durga Puja in Ramdia village, when members in-charge of pandal maintenance had stepped out for dinner.

Karmakar also added that a number of murtis were destroyed and their painting had been completed only on the 17th. Upazilla Nirbahi Officer (UNO) of Boalmari Jotan Chanda stated that along with several members of Boalmari Upazilla Puja Celebration Committee, Madhukhali Circle ASP (Assistant Superintendent of Police) Anisuzaman and Boalmari Police Station in-charge Aminul Islam paid a visit to the site.

As per the statement of the Faridpur District Puja Celebration Committee General Secretary Arun Mandal senior police officers including Faridpur Deputy Commissioner Atul Sarkar and Superintendent of Police Mohammed Alimuzzaman have been apprised of the incident and asked to take the necessary legal action in this regard.

Such incidents are not new in the Islamic neighbor country Bangladesh, where almost every year incidents of Durga Puja Pandals being vandalized by miscreants have been reported. The Hindu minorities of Bangladesh are constantly at the receiving end of Islamic fanatics who never bat an eyelid before assaulting Hindu temples.

The voice of minority Hindus in both of Bharat’s Islamic neighboring countries Pakistan and Bangladesh continues to be suppressed and the Hindu populace there continues to be oppressed by Islamists while their governments and administration more often than not look the other way.

The DNA had reported how the sacred Durga Puja had been turned into an annual murti desecration event in Bangladesh. The editorial said:

“In the People’s Republic of Bangladesh, another set of annual events centred on idols of Ma Durga start somewhat earlier than the puja itself. This is the widespread desecration and destruction of Ma Durga’s idols, always done by ‘unidentifiable group of miscreants’. The target faith community is always identifiable and predictable. So widespread is this pre-Puja idol desecration phenomenon that one Puja organizer said in sad resignation that instead of hitting arbitrarily, idol-destroyers should pre-specify each year which puja mandaps will be targeted. Already, the pre-Puja idol-breaking campaign has picked up. There’s a good geographical spread this year — 5 in Kishoreganj district, 6 in Rishipara of Gopalpur, 3 in Joari Bajar of Natore, 4 in Garua of Faridpur, 3 in Protapnagar of Sherpur and so on.”

This dates to 2014 and precious little seem to have changed in the ensuing six years. How much longer should Hindu minorities in the Islamic neighbors of Bharat continue to suffer?