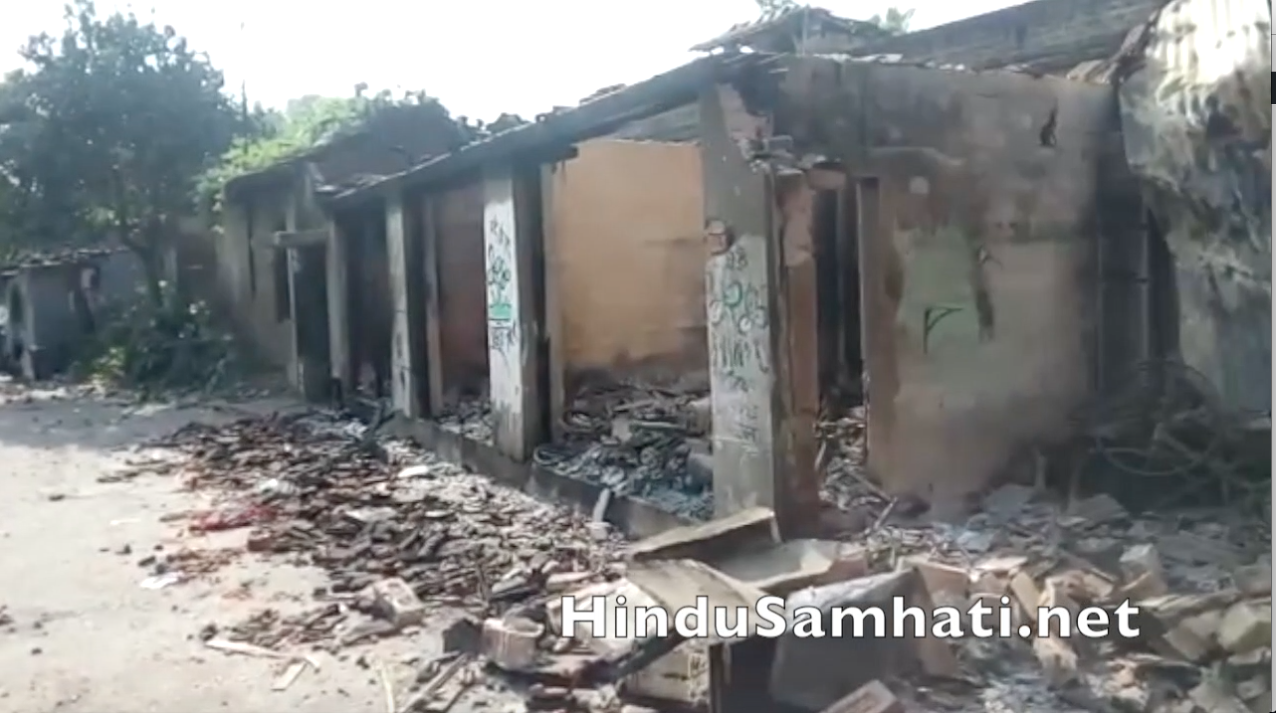 The attacks on Hindus in West Bengal following Eid-e-Milad festival have not spared even a local Hindu TMC leader’s house in Dhulagarh, Howrah. We had reported earlier on the rioting that broke out last week in Howrah and Birbhum districts – now, reports are coming in of disturbance in Burdwan district as well.

As news of this communal violence and total failure of law & order machinery people is spreading on the internet – mainstream media is still trying its best to downplay the gravity of the situation – people are questioning the conspicuous silence of West Bengal CM Mamta Banerjee.

A fact finding team of Hindu Samhati has shared a new video with HinduPost which shows the scale of destruction in Dhulagarh, Howrah due to the attack by Islamists. The video also shows the looting and burning of a house belonging to a local TMC leader Ashim Khara, allegedly by local Muslims who used to visit the same house for party meetings.

At 1:00 min in the video, a man can be heard saying, “They used a gas cylinder to set fire to the house…they looted gold and silver rings and other ornaments from my wife and daughter, and set fire to the text books of my son studying in 10th standard.”

At 2:20 min in the video, a woman talks about the destruction to the house of a local TMC leader Ashim Khara, “I know two of the attackers – they are local Muslim boys by the name Badan & Mintu ..they used to come to the house for party (TMC) meetings…after they had looted our gold & ornaments, TV & cycle, we requested them to allow us to douse the flames and save our home..but they refused and even prevented police from entering the area”.

Dhulagarh is around 30 km away from Kolkata – one hour’s drive.

HinduPost spoke to Mr. Prasun Maitra, an activist with human rights group Hindu Samhati which has been fighting for the oppressed Hindus of West Bengal since 2008.

“Attacks on Hindu workers of TMC are not new. For jihadis, all kafirs (non-Muslims) are the same and open to attack when they riot..it does not matter if the Hindu is aligned with TMC, Congress, CPM or BJP. TMC is doing everything to appease the Islamists, yet they will not hesitate to bite the hand which feeds them. Even last year, if you see my Facebook post from June 2015, a TMC leader Shankar Bhuiyan was attacked by a Muslim mob in South 24 Parganas and the TMC flag was burnt – till then Bhuiyan used to sing praises of secularism and Hindu-Muslim brotherhood.

The names of the Muslim youth involved in the present attack on Ashim Khara’s house – Badan and Mintu – is a common ploy adopted by Muslims of taking a fake Hindu name to fool Hindus. For eg. Razak becomes Raju and so on.”

“When one Rohith Vemula committed suicide and an Akhlak died in Dadri, secular-liberals made a huge hue & cry and raised these issues incessantly in Parliament. BJP has 4 MPs from West Bengal, including 2 central ministers – why have they not raised in Parliament the issue of repeated riots in West Bengal? Local Bengali media is not covering these riots, but if the issue is raised in Parliament they will be forced to cover. On a Zee News discussion recently, RSS ideologue Rakesh Sinha wanted to sponsor a ticket for Rahul Gandhi so he could visit West Bengal and experience the situation here first hand, but then why doesn’t Home Minister Rajnath Singh visit WB and take stock of the situation? When a child throws a stone at a Church in Delhi, Rajnath Singh personally follows up with the Delhi Police..why is he not speaking up on the situation in WB?

The urban Bengali Hindu living in Kolkata and elsewhere is blissfully unaware of the ground reality just few kms away from posh areas like Park Street. I don’t know what it will take to wake them up.”