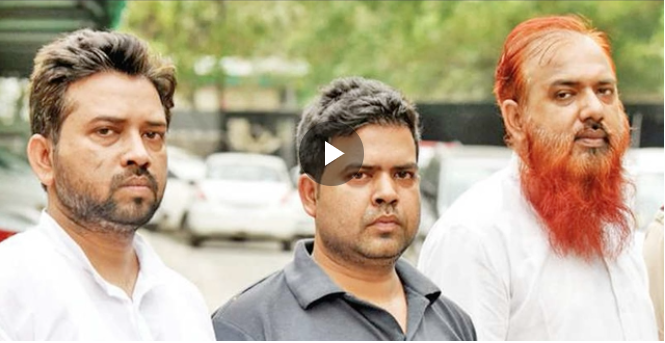 Another chilling case of an ‘inter-faith’ marriage/relationship involving a Muslim man and Hindu woman going horribly wrong has come to light from the national capital. An engineer, Sajid Ansari, first strangled his wife, Juhi, to death and then along with his 2 brothers disfigured her face and chopped her body into pieces for disposal.

Times of India reports on the gory case –

“A week after a woman’s dismembered body was found near OkhlaTank, police have arrested her husband Sajid Ali Ansari (26), an unemployed engineer, and his two brothers Ishteyaque and Hasmat for the murder.

Ansari strangled the woman, Juhi (26), during an argument and then chopped the body into seven pieces with the help of his brothers. The couple’s children were sleeping in the room when Ansari killed her.

The woman, a native of Bihar, had fallen in love with Ansari while they were studying in Kurukshetra and married him against the wishes of her family.

Cops found the torso and a leg stuffed into a carton, while the rest of the body was in a plastic bag and sacks. The face had been disfigured to make identification difficult.

Special commissioner (law and order, south) R P Upadhyay said, “It was a challenge for the investigating teams to identify the woman and trace her killers as there were no identification marks on the body. All evidences, including the carton, the victim’s clothes and bags collected from the spot, were minutely studied to get the location of the killers.”

Several teams went to shops in northeast Delhi from where the clothes worn by the woman were probably bought, but failed to get any concrete clues.

Cops also scanned through 90 PCR calls about disputes between couples to find out whether the woman was a victim of one such argument. The first breakthrough came from a tag on the carton that contained the address of a courier company based in Gurgaon. “We found that the carton was sent from UAE to one Javed Akhtar in Aligarh. A team was sent to Aligarh to track Akhtar. The man told cops that he had brought some goods from UAE and left one of the cartons at his apartment in Jamia Nagar’s Shaheen Bagh. He had rented the flat to Ansari,” said DCP (southeast) Chinmoy Biswal.

When a police team went to the address in Shaheen Bagh, it was found that Ansari had vacated the house in a hurry and left the keys with a neighbour. He had told the neighbour that he had tried to contact the house owner but could not get through to him.

When cops broke open the door of the apartment, they found the woman’s bloodstained clothes and some clues about Ansari. He was traced to his brother’s house nearby. During interrogation, Ansari told police that he had bought a cleaver a few days before the incident. He had decided to kill his wife the next time she got into an argument with him.

On June 21, he purposely struck a conversation that led to an argument during which he strangled Juhi with his hands. He then called Ishteyaque and asked him to help dispose the body. The dragged the body to the bathroom, chopped it into pieces and stuffed them in a plastic bag and sacks. Sajid then called his elder brother Hasmat, who stayed nearby, and asked him to help get rid of the dismembered body. Hasmat borrowed an Ertiga car from a friend and used it to carry and dump the body near Okhla. Sajid then shifted to Hasmat’s house.

A case of murder has been registered against Sajid, while Hasmat and Ishteyaque have been booked for destroying evidence. Juhi’s family in Bihar has been informed. The children have been sent to a relative’s house in Champaran.”

The politically incorrect pattern staring us in the face

If we set aside left-liberal political correctness which tells us that such crimes are manifestations of domestic violence affecting all communities (while the murder of a Mohammed Akhlak or cattle smugglers is interpreted by the same cabal as a national crisis of ‘Rising Intolerance’ of ‘Nazi-fascism’ proportions), and study the data, a pattern emerges.

The pattern tells us that Muslim men raping/killing Hindu women/wives/lovers (often with connivance of the husband’s family) occurs on a far-far greater scale when one looks at the demographic split of the two communities – for eg., such violent crimes involving a Hindu man murdering his Muslim wife are almost unheard of.

Let us look at a few such recent cases  –

3.) Mother of 2 Returns to Hindu Dharma After Chilling ‘Marriage’ with Muslim Man where father-in-law and brother-in-law attempted to rape her – Aligarh, UP – June 2018

And the list goes on…this is just the tip of the iceberg that we at HinduPost, with our limited resources, have managed to track over the last few months.

Any sane observer would conclude that we have a socio-cultural crisis on hand, where large sections of one community view women of the other community as ‘easy meat’. Even after years of marriage and bearing children, the Hindu woman is viewed as a disposable commodity by her Muslim husband and in-laws, who can be sexually exploited or murdered without any compunction.