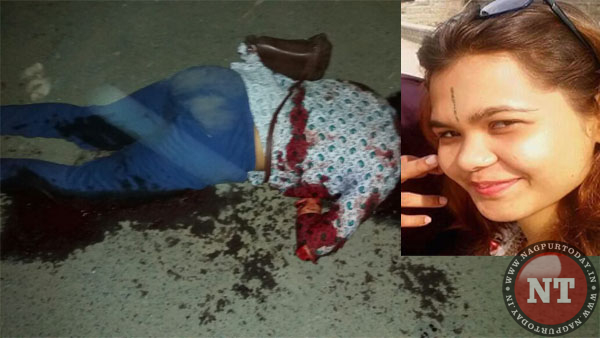 A 24-year old man, Wasim Taj Mohammad Pathan, brutally murdered his wife, Mahima Mahadeo Vitole (20), in full public view in Gajanan Nagar in Mankapur police jurisdiction of Nagpur on the night of April 30, local media outlets like Nagpur Today and others have reported. The accused allegedly suspected his wife’s character and stabbed her to death after a verbal argument. Pathan was arrested within hours of the crime, after police caught him with blood-soaked hands.

The deceased had a love marriage with the accused, a resident of Katol Road. Ever since their marriage, skirmishes erupted between the husband-wife duo. Fed up with the frequent quarrels, Mahima went to her parents’ house and was staying there since the past one year.

The accused indulged in all pressure tactics and frequently asked Mahima to stay with him. But she refused to relent. Furious over Mahima’s refusal, the accused, on some pretext, called her near Bajodiya Kirana Shop in Gajanan Nagar, Godhni Road, around 9 pm on Monday and picked up a quarrel with her.

During the argument, Pathan whipped out a sharp-edged knife and stabbed Mahima repeatedly. The profusely bleeding Mahima collapsed and died on the spot. On being informed, a team of Mankapur Police Station reached the spot and sent Mahima’s body to Mayo Hospital for post-mortem.

Mankapur PSI V D Naik, based on complaint of Ambika Mahadeo Vitole (38), mother of deceased Mahima, booked the accused Wasim Taj Mohammed Pathan under Section 302 of the IPC and reportedly arrested him within hours of the murder.

One of the reactions we often get when we post such news is – but such crimes happen everywhere, why single out a particular community?

Yes, it is true that such heinous crimes happen everywhere across the world. A jilted husband / lover killing his wife / partner has sadly become a relatively common occurrence, aided and abetted by modern pop culture where young minds are constantly bombarded with messages of “love & sex = progressiveness + modernity” through music, movies, TV and social media.

The reason why HinduPost puts extra focus on highlighting cases involving Muslim men committing acts of violence (physical, sexual etc) against Hindu women, is because this aspect is completely missing from mainstream discourse. While the gender issues afflicting contemporary Hindu society – female foeticide, sexual violence, gender discrimination – are widely discussed and debated, as they should be, there is complete silence on the topic of how non-Muslim women are objectified in eyes of conservative Muslims who believe in the absolute supremacy of Islam.

No social scientist in Bharat has ever bothered to study how young men who grow up being tutored that any woman not covered from head to toe in a burqa or who at least covers her head with a hijab, is like an ‘uncovered lollipop’ and hence likely to attract flies; who are taught that converting and marrying a kafir woman is a divine deed which will guarantee a spot in jannat (heaven) and also furthers the cause of the ummah by increasing Muslim demography; or told that as per scripture a kafir (non-Muslim) woman can be seized as a ‘spoil of war’ and used like a sex slave.

Not one MSM commentator has bothered to ask why it is that we rarely hear of cases involving Hindu men accused of grooming / raping / forcefully converting a Muslim girl? Why is the data of such crimes so skewed towards Muslim men committing crimes against Hindu women, when Bharat is 79.4% Hindu and just 14.2% Muslim?

Our liberal-secular elites pretend that religious indoctrination plays no part in this, despite criminals like Muhammad Shafi from Kerala themselves acknowledging it – Shafi posed as a Hindu NRI doctor on marriage websites to dupe and sexually assault over 30 Hindu women…when questioned by investigators about his choice of victims, he said “it is a sin to molest a Muslim girl.”

One look at her photos and Mahima Mahadeo Vitole appears to be a free-spirited, confident girl – the fact that she was just 18 when she married Wasim Taj Mohammed Pathan and shortly thereafter decided to separate from him, shows her independent streak. But what she probably didn’t know was the lifelong conditioning of her husband, who must have been under immense peer pressure to ‘control’ his kafir wife and make her live like a ‘good Muslim’ girl.

The Bollywood crowd which acts as the example-setters for such ‘love triumphs all’ relations will not shed any tears for Mahima. The yuppie crowd which is pushing our youth into ever riskier behaviour & experimental lifestyles, will also sweep Mahima’s death under the carpet as ‘routine crime’. But, given the right set of circumstances and the secularly acceptable identity of victim & perpetrator, these rent-a-cause activists will be out once again with their placards.

Someone must mourn the likes of Mahima Mahadeo Vitole, which is what we at HinduPost are trying to do….we hope that she gets justice, and that her painful death is able to open the eyes of more & more youth.