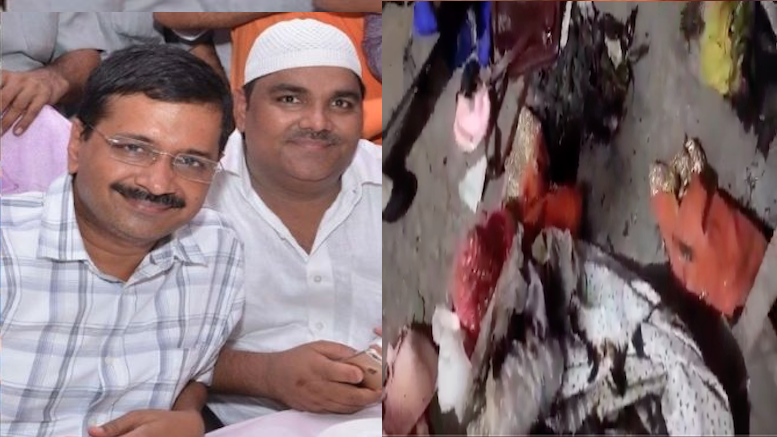 Many local residents are saying that minor Hindu girls returning from school/tuition, were mass raped and at least one of them murdered by the Muslim mob which was amassed by AAP Councillor Mohamed Tahir Hussain to terrorise the Hindu population in his Chand Bagh locality during the pre-planned riots that shook Delhi last week.

Earlier, Sudarshan News had revealed that women undergarments, clothes and other personal belongings were found in the basement of Tahir Hussain’s 4-storey home. Apart from IB operative Ankit Sharma, the naked body of a girl was also reportedly found from the drain behind Hussain’s house.

As per ground sources, the girl whose body was recovered from the drain was 13-14 years old. We are told that many local residents are still unaccounted for. For eg. in one case, a man was injured and admitted to GTB Hospital, and his wife who went to visit him along with her 3 year-old is still missing.

As per information received, at least 4 bodies (3 male, 1 female) have been recovered from the drain near Hussain’s house thus far. It is feared that more bodies are yet to be found.

OpIndia had reported how Hindu girls returning from tuition were “disrobed by the Muslim rioters, who exposed themselves and made indecent gestures, before sending the girls home naked.”

But knowing the way Islamists are indoctrinated to see kafir (non-Muslim) girls as nothing more than sexual slaves, what many had feared is now gut-wrenchingly being confirmed by locals – that minor Hindu girls returning from school/tuition were mass-raped. It is possible that more than one girl was murdered, or died from the unimaginable ordeal she/they must have been put through by the 500-1000 strong Islamist mob that had converted Tahir Hussain’s house into their command centre.

The same mob dragged Ankit Sharma inside the house and inflicted barbarity beyond words on him. Ankit’s autopsy revealed that he was brutally and repeatedly stabbed, leading to his death. There were “Multiple abrasions, deep cuts by sharp edge objects.”

What has not been disclosed thus far is that Ankit’s eyes were likely stabbed/gouged or had acid poured on them, going by footage which has emerged after his body was pulled out of the drain.

In another ghastly incident, 21-year-old Dilbar Singh Negi from Uttarakhand who was working in a sweet shop in Shiv Vihar was murdered in an equally brutal fashion. Dilbar Negi, identified as Hindu by rioters due to his pahadi features, had his limbs hacked off before being tossed into a fire and burnt alive.

“their ear drums were pierced with hot iron rods, eyes punctured and genitals cut off. The autopsy of the bodies also revealed that they were burned with cigarettes butts. Their limbs were also chopped off, teeth broken and skull fractured during the torture. Even their nose and lips were cut off.”

Warning: extremely graphic close-up of Ankit’s mutilated face can be seen here, and Dilbar Negi’s burnt body can be seen here. We have decided to post these gruesome photos after much deliberation, seeing the way their ghastly cold-blooded murders have been either ignored by the influential left-liberal media which is hellbent on labelling these riots as a ‘Muslim pogrom’, or used to spread propaganda like Wall Street Journal falsely claiming that Ankit was killed by a mob chanting ‘Jai Sree Ram’.

There is a clear lesson from the Delhi riots – the threat to Hindus from domestic Islamists is no different than the one posed by Pakistani Army barbarians or likes of Mian Mithoo – the dreaded Pir (spiritual head) of the Sufi Barchundi Sharif dargah in Sindh, Pakistan who facilitates abduction, rape, forced conversion and marriage of minor Pakistani Hindu & Christian girls.

A total of 148 FIRs have been registered and 630 people either arrested or detained so far in connection with the riots triggered by Islamist mobs using anti-CAA protests as a pretext. The death toll in the riots currently stands at 42. More than 250 people have been injured in the clashes. The GTB hospital has recorded 38 deaths, the Lok Nayak Jai Prakash hospital three, the Jag Pravesh Chandra hospital one, officials said.

Tahir Hussain is currently absconding. AAP’s social media head Ankit Lal, AAP’s Okhla MLA Amanatullah Khan and quasi-terror Islamist outfit PFI are staunchly defending Hussain, while many left-liberals are casting aspersions on the mountain of evidence against Hussain which includes video footage of Hussain talking with rioters on the roof of his house and multiple eyewitnesses testifying against him. Bollywood celeb Javed Akhtar has claimed Hussain is being singled out because ‘he is Muslim’.

AAP meanwhile has suspended Tahir Hussain from primary membership. CM Arvind Kejriwal has in typical fashion said ‘double penalty’ should be given to anyone from AAP who was found guilty of participating in mob violence.

As per Sirf News, call record details of Tahir Hussain’s phone has revealed that Hussain was in constant touch with Arvind Kejriwal (9 calls), his deputy Manish Sisodia (18 calls) and Okhla MLA Amanatullah Khan (56 calls) in the three days before North East Delhi erupted in Islamist violence.