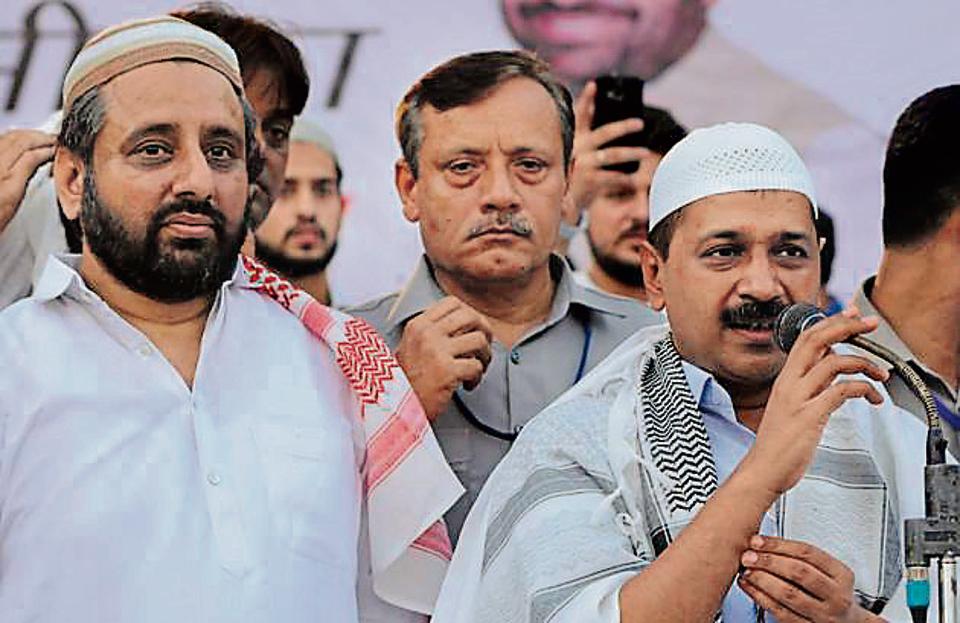 Controversial AAP MLA Amanatullah has threatened that ‘riots will happen in the whole country’ if action is taken against suspended AAP councillor Tahir Hussain, who has been sent to seven days police custody by a Delhi court for his role in the Delhi riots and the murder of Intelligence Bureau (IB) official Ankit Sharma.

Speaking to the media, Amanatullah said “Muslims are being targeted and it is being projected that Tahir Hussain and his men are responsible for the riots. If Muslims are arrested and sent to jail and labelled as rioters then riots will continue unabated in the country”. This statement is being seen as a direct threat  to law enforcement officials who are now cracking down on the brains behind the anti-CAA Delhi riots.

On Sunday, a Kashmiri Muslim terrorist couple with links to Islamic State were arrested for recruiting and inciting Muslim youth to violence over CAA. On Monday, police arrested Mohammed Danish Ali (33), a member of the quasi-terror Islamist org PFI, from NE Delhi’s Trilokpuri area for plotting communal violence and spreading false & incendiary propaganda during anti-CAA protests.

AAP Councillor Tahir Hussain’s 4-storey house in Chand Bagh area of NE Delhi emerged as one of the epicentres of Delhi riots. A 1000-strong Muslim mob had amassed in the house and pelted stones, petrol bombs and fired bullets at Hindus of surrounding areas. Hussain was himself seen along with rioters in videos shot by residents on their mobiles. IB staffer Ankit Sharma was dragged into Hussain’s house by the mob, brutally murdered and then dumped into a drain. Women clothes and undergarments were found in the basement of the house and eyewitnesses said one girl’s naked body was fished out of the drain behind his house.

While the mainstream English-language media in Bharat and the West has tried to project the Delhi riots as a state-sponsored ‘Hindutva’ pogrom directed against Muslims, the ground reality is the exact opposite. The violence was bubbling under the surface since December when major violence first broke out over CAA, and since then dozens of hate speeches from radical Islamist politicians, outfits and Muslim clerics  have been doing the rounds, inciting Muslims to violence by spreading brazen lies about CAA-NRC. However, so powerful has been the media propaganda about the Delhi riots that even US presidential contender from Democratic party, Bernie Sanders called it “anti-Muslim mob violence”.

AAP MLA Amanatullah is himself a serial offender when it comes to delivering incendiary hate speeches to whip up frenzy, anger, fear, victimhood and a sense of desperation among Muslims, while painting the majority Hindus and the Indian State as oppressors.

In the above two clips of speeches delivered during the anti-CAA protests, Amanatullah says –

“In 1947, you (Muslims) had control over all businesses, today all your businesses have gone to others (Hindus). We never fought our battle on the streets, if we had come out on the streets after one riot, no other riot would have happened and you would be safe in this country today. Muslims ruled this country for thousand years, how can their condition be worse than Dalits today? In 1947, Muslims occupied 47% of Government jobs, today that number is just 2%.”

“Today, it has become impossible to breathe, to live with freedom, to protect our mosques, to walk wearing a skull cap, or wear a burqa. Today, they have brought CAB, you know what they will do next? They will ban azaan from the mosques, there will be no mikes. Men will be banned from sporting a beard, or wearing a skullcap. Next, women will not be allowed to walk in a burqa. there is a limit to everything. When Narendra Modi and Amit Shah brought the triple talaq bill, they took our silence to be cowardice.”

“They might call you a Mota Bhai in Gujarat but we want to make it clear that we will not tolerate any interference in Shariat, and we are also willing to sacrifice our lives for it…Why are they so afraid of Muslims, we merely number between 25 and 30 crore, still they are so scared. This is because they know that we are the Ummati of that Allah’s Rasool, whose army, numbering merely 313, defeated lakhs of infidels (Battle of Badr).”

Amanatullah Khan – no stranger to controversy

Amanatullah Khan has been accused of slapping Delhi Chief Secretary Anshu Prakash during a meeting at CM Kejriwal’s house, and has been arrested for sexually harassing & exploiting his sister-in-law. In July 2016, he was arrested for allegedly threatening a woman with dire consequences. He has also faced corruption allegations during his stint as Chairman of Delhi Waqf Board.

In a public address on 16 Feb 2016, Khan had called the Modi government ‘Haraamkhor’ (bastard) for arresting a Muslim cleric Maulana Syed Anzar Shah Qasmi on terror incitement charges without any ‘proper proof’. Back then too, he had incited Muslims to take to the streets in a show of strength to browbeat police and administration.

“If you people decide to gherao (surround) Home Minister Rajnath Singh’s house…Delhi has a huge Muslim population. If you start doing it, then I can assure you that the Modi government does not have that much courage to even touch your children,” he had said.

In 2014, Amanatullah, then an AAP volunteer, was arrested after he confessed to putting up provocative posters in Muslim areas of Delhi inciting communal sentiments against 3 Muslim Congress MLAs who were allegedly ready to help the BJP form a Government after the AAP-Congress coalition Government formed in Dec 2013 had collapsed. Khan has also claimed that the 2008 Batla House Encounter (Batla House is located near Jamia Nagar in Okhla) in which 2 IM terrorists and 1 Delhi Police Inspector were killed was ‘fake’.

If ever there was a leader fit to be prosecuted for hate speech and inciting violence against the State, it is Amanatullah Khan. People like him, harboured by ‘secular’ parties like AAP, set the worst possible example for Muslims of this country.