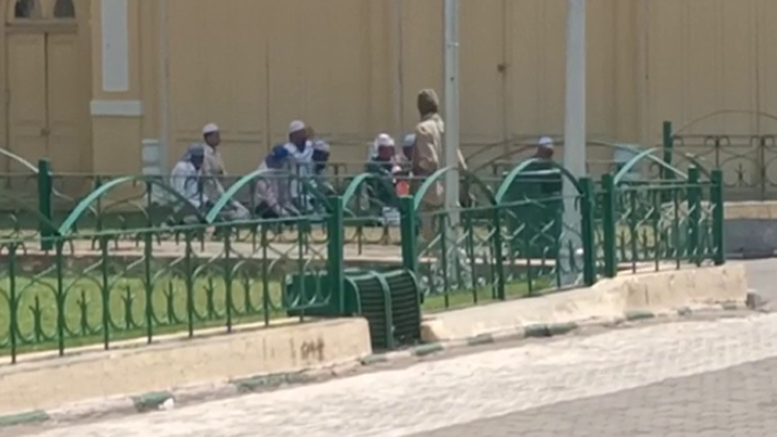 A viral video showing a group of men performing namaz at the Amba Vilas palace has emerged on social media raising several questions. The men are reportedly tourists from Gujarat who had visited the palace on Monday.

The ten men are seen washing their hands and feet within the palace premises before performing namaz. News Karnataka says Mysuru Palace Deputy Director refused to comment on the issue when approached. Incidentally, the controversial video comes even as the hijab row, which began in Karnataka’s Udupi and subsequently created a stir across the country, rages on.

The Mysuru palace, well-known for its Dussehra celebrations, has been the seat of the Wodeyar Maharajas. In 1897, the ancient wood-built palace burned down following which it was rebuilt in 1912. The palace complex houses 12 Hindu temples with the oldest one dating to the fourteenth century while the latest one was built in the year 1953. The Mysore Dasara is a ten-day-long affair that attracts tourists from across the globe and sees the palace being lit up adding to its charm and beauty.

While it is difficult to say if the act was a deliberate attempt at provocation, the palace guards not being vigilant enough does raise eyebrows. In this context, it must be highlighted that the Hijab row manufactured by CFI/PFI and supported by other Islamist outfits across the country is seeing several deliberate provocative acts including making children perform the namaz within government school premises. No public place should be used for performing namaz as Central Waqf Council member Rais Pathan had pointed out earlier.

The Hijab row has also seen Islamists unleashing violence with reports emerging of the brutal murder of a young Bajrang Dal activist Harsha in Shivamogga and Kanpur RSS worker Bhaskar Singh alias Manish being beaten up with iron rods.