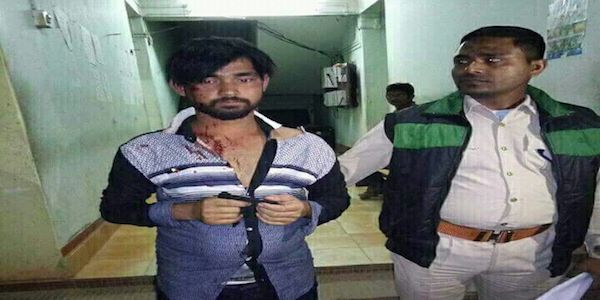 A married Muslim man, father of two, was thrashed by public and arrested on Sunday by Assam Police for luring teenage girls using a fake Hindu profile on Facebook.

The man whose real name is Kabir Hussain used to contact teenage Hindu girls by faking his identity. In the current incident, he introduced himself as a Hindu man named ‘Rajdeep Das’ and contacted the victim on social media through the fake name of Rajdeep Das.

The girl fell for him and believed everything he said about himself. Hussain had made all plans to run away with the girl, who was a student of Rabindra Sadan College in Karimganj. It is said that the girl’s surname was also ‘Das’, and the accused used to change his name accordingly to impress different Hindu girls.

On Sunday evening, Hussain and the girl met near Shambu Sagar City Park in Karimganj and were about to run away to get ‘married’ when few locals observed them and countered the boy. When the public doubted his identity they started inquiring further, few people from Bajrang Dal also joined the group and when they came to know that he was running away with the girl they gave him a sound thrashing.

Later the man revealed his actual identity as ‘Kabir Hussain’, a resident of Inayatpur, who is married and a father of two children.

The locals called the Police and lodged a police complaint against Hussain. OC of Karimganj Police Station confirmed the incident.

Such cases of Muslim men assuming fake Hindu identities online or offline to lure unsuspecting Hindu girls are extremely common. It is a favorite tactic of Love Jihadis, i.e. Muslim men who target women of other religions for sexual grooming or conversion & marriage, claiming divine sanction under Islamic law which encourages Muslims to proselytize their faith and convert non-believers.

Here are some recent cases that we have reported on –

Hindu woman lured via FB Raped, forced to eat beef and convert to Islam in Bihar