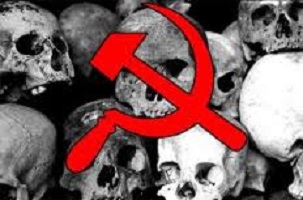 In the continued politicization of Rohith Vemula’s suicide, leftist student groups from JNU & DSW held a ‘protest’ outside the RSS office in Jhandewalan, NewDelhi. Below is a short video of these ‘protests’ where the students can be heard abusing PM Modi, and also singing the below lines –

(A Neem leaf is bitter, Narendra Modi is a Pimp)

Some sources say that the students also hurled casteist slurs against the PM (who belongs to the backward caste Teli-Ghanchi community) and the police personnel on duty.

After breaking the first barricade, the protesters were about to crash the second barricade where maximum police personnel were deployed, leading to the clash with police. This is not the first instance of violent street politics that leftist student bodies like SFI (student wing of Communist Party of India – Marxists) and DYFI specialize in, especially in states where communists have a significant political presence like West Bengal and Kerala. Some incidents from the recent past are listed below:

TISS students were shouting “RSS murdabad” (“death to RSS”) when I was leaving the venue. Goons dont know that I have never been in RSS

Leftist goons at TISS filing false complaint against student who moderated, as revenge for woman filing complaint for being manhandled

And this violent, agitational brand of left politics which has destroyed the academic environment in many college campuses across the nation, has now found another willing player.

While a great deal of outrage can be seen in mainstream media over this clash between police and leftist student groups in front of the RSS office, brazen attacks on another student body, ABVP, are for some reason not considered news worthy.

This latest episode also points to the urgent need for police reform across the nation to create a modern, efficient police force that can better deal with such ‘protests’, which will only grow seeing the brand of politics that is being glorified in media. The left-Islamist radicalization of talented students into bitter malcontents is creating an environment in our colleges which is not at all conducive to learning. If we want to build modern Takshashilas and Nalandas, our universities and colleges should focus on knowledge and exchange of ideas, not politics.