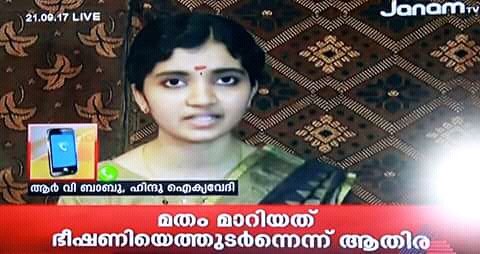 Athira, a Hindu girl from Uduma in Kasaragod who converted to Islam after leaving home in July, has declared that she is returning to her original faith. Addressing mediapersons here on Thursday, Athira said she had realised her mistake and hence decided to go by the wish of her parents to embrace Hindu Dharma once again.

‘‘I was attracted to Islam through my college-time friends. They first told me about the evils of polytheism practised by Hinduism, prompted me to listen to religious sermons by Muslim scholars and gave me books about Islam,’’ Athira told media persons.

“They spoke about how Islam was scientific and logical when compared to Hinduism which encouraged idol worship. Hinduism has so many gods whereas Islam has only one. This set me thinking as I had no answer to their arguments,” said Athira.

She said that she was impressed by what her friends told about the Quran. They gave me lot of literature on Islam. I also heard speeches, including that of Zakir Naik.

Some of the books that I read mentioned about life in hell. Any ordinary person will get scared reading about the hell that one would experience if one didn’t follow Islam, she said.

She said that some members of the Popular Front of India (PFI) had facilitated her conversion. ‘‘Siraj, brother of my friend Aneesa, was the key driving force behind my conversion. It was Siraj who prompted me to leave my home and convert to Islam,’’ Athira said.

Athira got in touch with a religious scholar, Asif Usthad of Malappuram, through the brother of Shereefa, one of her friends. Later, she joined the WhatsApp group Hidayath sisters, and eventually shifted to the residence of one of Siraj’s relatives.

With her parents filing a missing complaint, Athira, who had converted to Islam by then, appeared before a magistrate. Later, she was produced before the High Court based on a habeas corpus petition filed by her parents and agreed to return home. Having returned home, she learned more about Hindu Dharma and decided to return to her original faith.

“Now, after staying with my parents and also attending classes in Arsha Vidya Samajam, I have realized that ignorance of one’s own religion is leading us to go after others,” she said.

Athira had left behind a 15-page letter in which she said the decision to learn Islam was her own and she would return after her ‘studies’. She also urged her parents to follow in her footstep.

The tone of the English MSM articles quoted above, i.e. The Hindu and Times of India show how easily media distorts what is a clear case of a Hindu girl being brainwashed by a dangerous radical cult with known terror links (PFI).

There have been umpteen cases reported from Kerala like Akhila, Nimisha, Shruti, Tabitha, Mariyam etc., yet The Hindu chooses to use a headline like ‘Kerala woman who embraced Islam to return to Hinduism’.

The dictionary meaning of Embrace:

‘accept (a belief, theory, or change) willingly and enthusiastically’

Can anybody in their right mind, after listening to Athira’s harrowing experience, say that she ’embraced’ Islam?

TOI headline says ‘Misled’ Kochi woman returns to Hinduism – so in their headline itself they are expressing doubt on whether Athira was ‘misled’ or not – in other words, the headline is telling you that there was no deceit or distortion involved in her conversion to Islam.

Moreover, these articles gloss over the fact that Athira’s rescue and return to the Hindu fold was achieved by two grass-roots organizations consisting of ordinary Kerala Hindus striving hard to uphold their Dharma in difficult and dangerous circumstances – 1.) Volunteers of Hindu Help Line, a VHP initiative launched in 2010 which has since grown by leaps and bounds 2.) Arsha Vidya Samajam (AVS), an organization dedicated to propagation of Sanathana Dharma, Bharatiya philosophy and comparative study of religion.

AVS is getting an increasing number of cases of Love Jihad survivors who desperately need counselling and rehabilitation. If any reader is interested in donating for this noble cause, they can donate in the below mentioned account (information verified by HinduPost)

Details can bE found here pic.twitter.com/yM291frIHk

After donating, please drop an email to [email protected] with transaction details to get receipt.