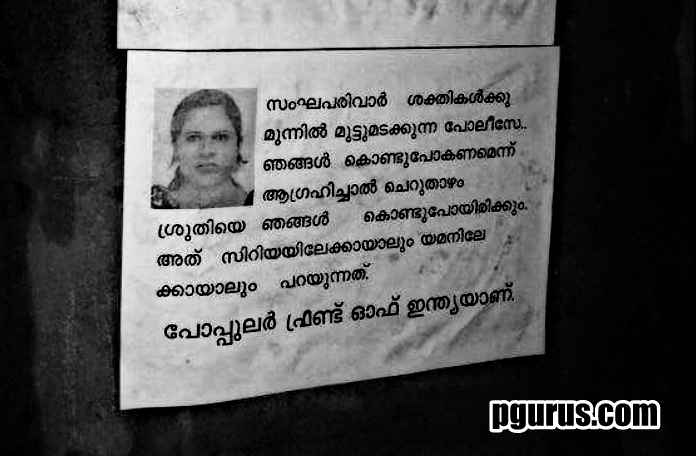 In signs that the judiciary has well and truly woken up to the organized Love Jihad carried out in Kerala by Islamist terror organizations like PFI (Popular Front of India), the Kerala High Court ordered the Director General of Police to allot necessary protection to Sruthi from Kannur, a girl recently rescued from clutches of a Muslim man, who is facing threats from PFI. The High Court also asked the DGP to enquire about the complaint that there was a plot planned to take Sruthi to Syria.

As per this NewsMinute report –

“Sruthi, a woman from Pariyaram of Kannur district was rescued after allegedly being in the illegal custody of a man. The court ordered police protection while deciding on the petition filed by Sruthi’s parents, M Rajan and his wife.

According to reports, the woman’s family had to relocate from Kannur after she allegedly received threats from PFI activists. Following this, they approached the HC.

The petitioner had argued that a person named Anees Hameed abducted their daughter, converted her to Islam and married her under religious customs. Later police traced his house and produced Sruthi before the magistrate court on July 21. While the woman first preferred to go with her husband, she later returned to her parents.

Sruthi had reportedly informed her parents that her husband was trying to take her to Syria.

The High Court also asked the DGP to enquire about the complaint that there was a plot planned to take Sruthi to Syria. The HC also ordered a stay on the Magistrate court’s search warrant based on a complaint filed by Hameed.

In his complaint, Sruthi’s father Rajan had stated that Hameed together with some religious organisations had threatened to take his daughter to Syria or Yemen. He also claimed that Hameed emotionally blackmailed Sruthi by pretending to be in love with her.

The parents also said that Hameed had now filed a complaint before the Payyannur Judicial First Class Magistrate Court alleging that the family has detained Sruthi.

The missing complaint was first filed by Rajan on May 16 after which the girl was produced before Judicial First Class Magistrate Court, Taliparamba on July 21.”

On July 16, after police had rescued Sruthi from the clutches of jihadis, PFI had put up posters in Kannur and other areas saying ““DEAR SPINELESS POLICE, WHICH BOWS DOWN TO SANGHI FORCES, WE HAVE DECIDED TO TAKE SHRUTI. WE WILL TAKE HER TO SYRIA OR YEMEN AND GIFT HER TO ISIS. DO WHAT YOU CAN,
LET US SEE IF YOU CAN STOP US!”

Sruthi’s case comes on the heels of the Kerala High Court annulling the ‘marriage’ of Akhila (converted to Hadiya) with a Muslim man Shafin Jahan who investigations revealed to be an IS (Islamic State) supporter. That High Court ruling came after a petition by Akhika’s retired armyman father that his daughter was forcefully converted to Islam in an Islamic conversion centre in Mallapuram run by PFI. In a phone conversation with her father, Akhila had spoken about joining IS and going abroad.

The High Court ruling was challenged in Supreme Court by Jahan. In June, SC ordered NIA to access all records of the investigation carried out by Kerala Police and report its findings. In August, NIA told the court that Love Jihad is real and that “there is a pattern to convert Hindu girls and get them married to Muslim men”. The SC has now directed the NIA to further probe the matter under supervision of former Supreme Court judge RV Raveendran.

Interestingly, Jahan’s case is being fought by high-profile lawyer Kapil Sibal, a Congress leader who served at the helm of various ministries in the UPA government. Other prominent members of the Lutyens’ lawyers network such as Sanjay Hegde (driving force behind the ill-conceived MASUKA law against lynchings) and Anand Grover (lawyer who appealed for stay on terrorist Yakub Memon’s execution, and had remarked “These blood-thirsty people will hang Yakub tomorrow” after SC bench rejected his plea) have also criticized the SC ordering an NIA probe as “absolutely horrific.” One supposes the hard evidence of radicals brainwashing girls at centers like Sathya Sarani, PFI’s open threats and past record, the targeted girls’ stated intent of joining IS…all this means nothing for the elite lawyers club.

Government of Kerala has earlier stated in court that PFI is a resurrection of the banned outfit Students Islamic Movement of India (SIMI), and that it has links with Hizbul Mujahideen,Lashkar-e-Toiba (Let) and the al-Qaeda. PFI came to national prominence in 2010 after it chopped off a Christian professor’s right hand for setting a question paper that ‘hurt’ Muslims. Since then, it has been involved in several crime cases including murder and attempt to murder. And now its role in organized Love Jihad, especially through the notorious conversion centre ‘Sathya Sarani’ in Malappuram, is clear for all to see.

So the question needs to be asked – why hasn’t PFI been banned yet? What are the state and central Governments waiting for?