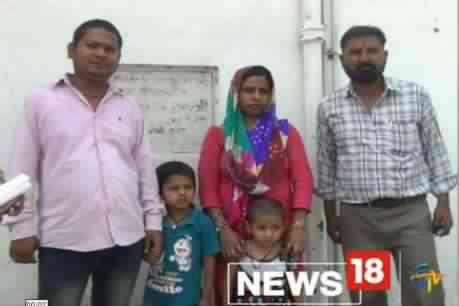 A case of forced circumcision of a Hindu man by a maulana (Islamic preacher) has come to light in Meerut in Uttar Pradesh. The victim and his family have pleaded for justice by complaining to the IG and the SSP.

Amit Bhardwaj, a resident of Madhavpuram in Meerut’s Brahmapuri police station area, married a Muslim woman who converted to Hindu Dharma around 10 years back. At present the couple has two children. But for the past 6 months, Amit is being threatened by one Maulana Riyazuddin from Kharkhuada area of Meerut to either convert to Islam or leave his wife.

When Amit refused, the Maualana had him kidnapped and held captive in a house in Madhavpuram area – he was thrashed brutally and later dumped near the railway line in a critical condition. Amit underwent treatment in a hospital for 2.5 months to recover from this assault. When the family still refused to be cowed down, Maulana Riyazuddin recently had him drugged and forcibly circumcised. Amit and his family have been threatened that they will be killed if they don’t convert.

Wife’s family has no objection, but Maulana issuing threats

Amit’s wife told the SSP that she had married Amit of her own volition, and decided to adopt Hindu Dharma and raise their children as Hindus of her own volition. Her family also raised no objection. But the Maulana is threatening her to either force her husband to convert to Islam, or leave him. If she doesn’t do either, she should be ready to ‘face the consequences.’

Not liberals, but much maligned Hindutva organizations come to family’s aid

Amit and his family don’t exist for our khadi-wearing, globe-trotting liberal set. As per their playbook, this case is a routine law & order issue, which shouldn’t be ‘raked up or politicized.’ They would much rather occupy themselves with pleading the case of the Kashmiri Farooq Dar, who was tied to a jeep by the Army to prevent a blood-thirsty stone pelting mob from lynching officials and security men on election duty.

On Friday, the couple along with Hindu Mahasabha’s UP general secretary Naveen Tyagi, Ravi Chauhan and other workers, met IG Ajay Anand to apprise him of the situation. The IG said this is a serious issue and ordered the SSP to investigate the matter.

UP police have registered a case against Maulana Riyazuddin, and a medical test on Amit. One wonders what the police had been doing for 6 months, when the harassment of the family first started. Even now, under the rule of so-called ‘Hindutva hardliner’ Yogi Adityanath, the family only managed to get a hearing after their case was taken up by the Hindu Mahasabha.

If this does not reflect the pitiable situation of Hindus in Western UP, what does? It is only the community bonds (fast eroding though) and much-maligned grassroots organizations like Bajrang Dal, Hindu Mahasabha, Hindu Yuva Vahini, Hindu Munnani, VHP etc which are providing assistance to hapless Hindus like Amit Bhardwaj.

This is not the first time when an inter-religion marriage of a Hindu man and a Muslim woman has produced violent backlash in UP and elsewhere.

Liberals will be quick to jump and point out cases of backlash by Hindu families against Hindu girls marrying Muslim men. But this is a false equivalence – while any sort of honor killing in Hindu society deserves unequivocal condemnation, the fact is that if an adult Hindu girl decides to marry a Muslim man of her own volition, sooner or later any opposition by the family fizzles out in most cases. Of course, love jihad cases where the Muslim man traps the girl by assuming fake identity or other means are and should be opposed.

But cases like the present one from Meerut where Amit’s wife’s family (Muslims) had no objection to her marriage, but a Maulana is threatening, is unheard of when a Hindu girl is involved. We have analyzed the reasons for this difference between outlook of both communities in an earlier article.