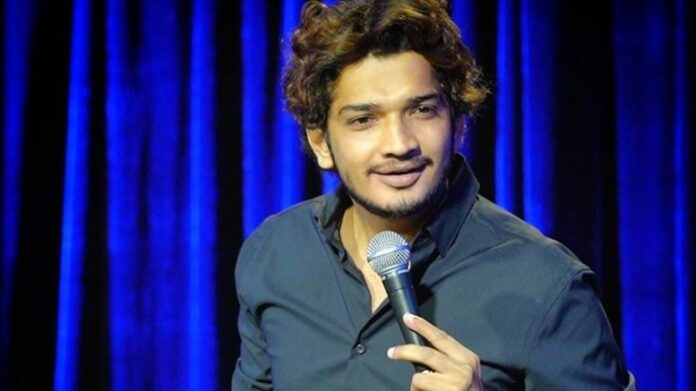 Videos of Navratri celebrations from all over the country have gone viral on social media. However, a video of Munawar Faruqui in a Garba venue came as an unpleasant shocker last week. The video surfaced on social media and instantly went viral. Reportedly, famous singer Falguni Pathak was also seen performing a song in front of many people doing the Garba. Though the details of this venue are yet to be confirmed, it is alleged that it is in Mumbai.

Given that the Garba organizers had invited a celebrated singer to perform live at their function, we can ascertain that this was a well-established Garba event. People on social media also claim that Faruqui attended the venue on invitation, and this is where the core problem lies. If the organizers of Garba invite the alleged comedian and a known Hindu hater to participate in Garba, we can say that the rot is at the root.

Faruqui had made offensive jokes about Hindu deities and mocked Hindu deaths by Islamists. This rabid Islamist had shown the audacity of using profanities for Mata Sita and Bhagwan Ram. He made a brutal joke about the Sabarmati Express massacre by the radical Islamists.

He had actively participated in the anti-NRC protests. He held a placard saying his documents were burnt in the 2002 riots – the riots triggered by the death of 58 innocent Hindus charred to death by Islamists who rank just a little higher in the scale of radicalism than where Faruqui is standing.

Playing the victim card after doing wrong is something this alleged comedian has mastered. Not only did he pretend to be the victim of the 2002 Gujrat riots initiated by Islamists, but he had also announced his retirement from comedy twice on social media, citing hate from the Hindutva brigade. Yet, shortly after his dramatized exit from the comedy scene, he announced his upcoming shows.

Faruqui has exposed himself as a highly manipulative individual that uses his Muslim identity to evoke sympathy from the leftist brigade and set narratives in his favour. His hate for Hindu sentiments and beliefs is not something he has even tried to hide. By inviting this rabid Hindu hater to Hindu religious events, the Hindu organizers show that the rot in the Hindu society runs deep.

What business does an ardent Hindu hater have at a Hindu festive celebration?

The Garba is a celebration of Maa Ambe, a manifestation of Devi Durga. The Garba dance and festivities mark the mother goddess’s adulation of the “garbha”. The occasion starts with an elaborate Aarti of Mata Ambe, and traditionally, all the songs played during Garba are dedicated to the praises and greatness of the Hindu deity.

This is another crucial aspect forgotten by the organizers and the DJs who play music at the event. The trend these days is to play Bollywood songs at the Garba. Many believe that this trend popularizes Garba in different parts of the country and beyond. However, there should be a rulebook for what songs can be played at the gathering.

In one of the visuals, it was seen that the crowd was dancing to the tunes of “Mujhe Pyar Huya Allah Miyan.” In many places, Sufi songs with lyrics like “Maula mere Maula,” “Ali Maula” was played during Garba. Over-secularisation of Garba by these commercial Garba organizers will lead to a cultural genocide of this religious function. We are seeing the perishing of religiosity in Kolkata, where Durga Puja has been turned into a social carnival completely disconnected from its religious significance.

Sufi songs and Islamist individuals have no business in Garba. This is the only truth that needs to be understood and followed. No kind of damage to the Hindu traditions should be normalized or tolerated, regardless of the incessant gaslighting by liberals and Islamists.