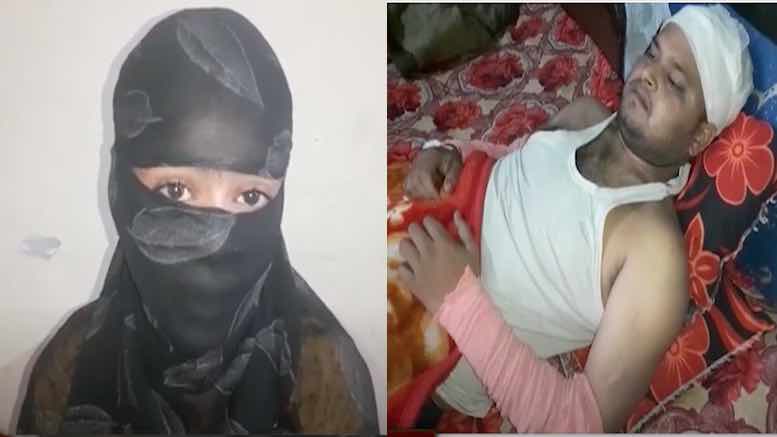 In another shocking case from Faridabad, Haryana, a group of Muslim goons barged into a Hindu house where Chhath Puja was being performed on 19th November, and tried to abduct a young girl. The girl is a native of Bihar whose family had just shifted to Durga colony in Sarurpur a few months back from another part of Faridabad city.

As per the girl’s testimony to local news channels like STV Haryana News and News48TV, she and her family had sat down for Chhath Puja on the night of 19th November when local goon Ikram sent a young boy to call for her. When she refused and sent the child away, Ikram landed up at their house with 8-10 others. They started asking ‘ladki kahan hai?’ (where is the girl?) and caught hold of her hand to drag her away.

When the girl’s mother tried to intervene, they thrashed and pushed her away. They then molested the girl near the stairs of the house. A friend of her brother tried to recuse her and he was brutally attacked by the mob and left for dead. The girl adds that when she was trying to give her statement to lady police, they put pressure on her to settle the matter.

The girl’s maternal uncle told media that Ikram is feared by everyone in Durga colony. Around a month back, Ikram had approached his sister (the girl’s mother) and said that he would get the girl married in his quam (Muslim community). Ikram said that as you are poor people and your husband is handicapped, I will ensure your daughter is married off and also assist you financially.

The girl’s mother angrily drove him away from their home and warned him not to say such a thing ever again.

The uncle further claimed that when they arrived at the police station, the police started dictating his niece on what to say in her statement – when he objected, they started threatening the girl who was in tears. The police kept telling the family that their case is weak, and that they should withdraw their case else they only could land up in trouble. “You have come from Bihar, just earn and live here, don’t get into all this…if you agree for settlement, we will ensure you get a fair deal,” the police is alleged to have said.

He named Sub Inspector Sushila Phogat in the Women Cell as the one who was pushing for settlement and pressurising the family to withdraw their case.

But the uncle said, “we want justice…recently we saw Nikita’s (Tomar) case, then another happened few days back, and now this happening with us. This is only increasing, how long will be live subservient to them?”

Avinash, the youth who was brutally attacked by Ikram and the other goons, told media, “I went for Chhath to their house as I do every year, and saw the girl being dragged. I tried to mediate and end the dispute, but they started arguing with me. Suddenly, someone attacked me with a sword from behind, and then many of them pounced on me and started beating me with rods and sticks. I had no prior animosity with any of them (in tears) yet they thrashed me so mercilessly that I fainted. I want police to take action.”

When reporters reached out to the Sanjay Colony police chowki in-charge, she did not say anything, and the Mujesar police station SHO also declined to comment.

Such cases are now the norm in Delhi-NCR (Faridabad is part of National Capital Region), Western UP, Mewat and various other parts of the country. It will not be an exaggeration to say that things are gradually headed in the direction of what we witness in Pakistan today where minor Hindu girls are abducted, raped, forcibly converted and married to Muslim men with impunity and with full state complicity.

Our entire system is failing to protect Hindu girls, with some startling judgements like one in 2017 by a Delhi court which acquitted an adult Muslim man of rape and kidnapping charges despite him ‘marrying’ a minor Hindu girl after converting her to Islam – the girl was recovered from West Bengal but claimed she left of her own volition. Judge Aswani Kumar Sarpal explained his decision by observing that ‘there was a conflict between the POCSO Act and the Muslim Personal Law which Parliament probably did not foresee’.

On the other hand we have Muslim judges like Judge Fakhruddin of Haryana’s Charkhi Dadri district court who is alleged to have exhorted Muslim complainants in a case thus, “Shoot them…don’t be scared (of Hindus), they don’t deserve it. I will take care.”

Our elites sneer with contempt at the very mention of the term ‘Love Jihad’ which common Hindus have coined to define the phenomenon of religiously motivated grooming and targeting of Hindu girls. Even the Church in Kerala has warned against the Love Jihad menace, but this too is glibly glossed over by left-liberal elites.

Haryana appears to be losing the plot on law & order front. It is clear that even after Nikita Tomar was shot dead outside her Faridabad college by a Muslim stalker, and Aman Khan (19) kidnapped a 13-year-old Hindu girl in Faridabad, the police machinery has still not pulled up its socks. The suicide of ex-councillor Harish Sharma due to police pressure over a cracker selling case, despite the Home Minister’s assurances to Sharma and his family, further deepens the suspicion that something is seriously wrong within Haryana law enforcement.

CM Khattar and Deputy CM Chautala should take note and crack the whip, lest we have a repeat of 2013 Muzaffarnagar riots which were triggered after two Hindu brothers protesting the sexual harassment of their sister shot dead the Muslim stalker and a Muslim mob lynched the brothers as they were trying to escape.