B.Com student Nikita Tomar shot dead by stalker Taufiq who had also kidnapped her in 2017 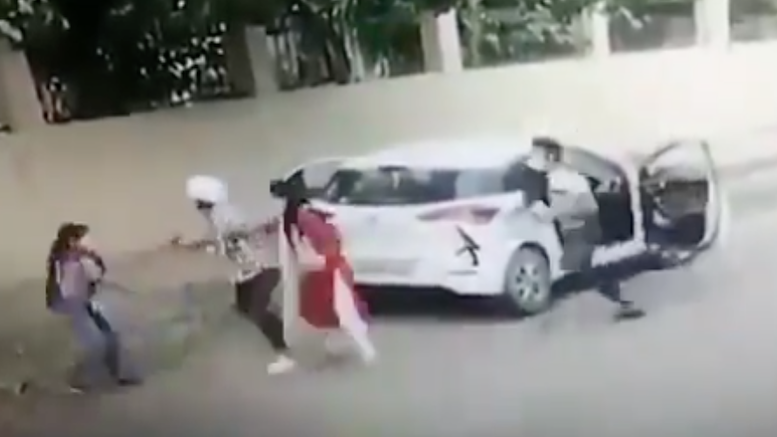 Another Hindu girl has been murdered by a Muslim stalker. 20-year-old B.Com final year student Nikita Tomar was shot dead by her stalker Taufiq in Faridabad on Monday afternoon. Taufiq has been arrested but another accused in the murder is still absconding.

CCTV footage shows a girl named Nikita Tomar being shot dead by an assailant (Taufeeq) outside her college in Ballabgarh, Faridabad. Shooter and associate flees in car. Police have arrested Taufeeq. pic.twitter.com/idOPIDZfDo

As per a Times Of India report –

“The incident took place around 3.45pm, when the girl, Nikita Tomar, came out of her college after giving her exam. She was studying in B.Com final year.

As the girl stepped out of Aggarwal college with her woman friend, an i20 car with two occupants inside stopped by her side. One of the accused tried to pull her in and opened fire when she resisted and raised alarm. The girl was shot in her chest and fell down while bleeding heavily.

The shooter and his associate then got into their car and drove away.

The shooter, sources said, studied with Tomar till class X and had kidnapped her in 2017 in what police said was a one-sided love affair. The family had lodged an FIR but later withdrew case due to social stigma and to allegedly keep their daughter out of any legal procedure. However, the accused continued to harass her.

Tomar lived with her family in Sector 23 in Ballabgarh. The police are looking for the second accused.”

A few months back, another girl Naina Kaur was murdered by her stalker Sheru Khan right in front of her aged parents, just days before her marriage. Naina too had studied in the past with the stalker.

This murder is another clear indication of how the Indian legal & policing system has failed Hindus. A man who had kidnapped the victim 3 years back, was allowed to go scot free with nothing to prevent him from stalking & harassing the same girl. The same system goes out of its way to rehabilitate brutal ‘juvenile’ rapists belonging to the minority community as we saw in the Nirbhaya case, where Mohammed Afroz was given a new identity and settled as a cook.

Such cases also show the break-down in community bonds and increasing individualistic isolation of Hindu society that a so-called ‘upper caste’ girl was being harassed by a so-called ‘oppressed minority’ youth for over 3 years in a Hindu-majority state like Haryana, and yet no community organisation was able to ensure the girl’s safety or come to her family’s aid.

Muslim society needs to introspect hard on the misogyny and disregard for non-Muslims that is hard-wired in large sections of their society, the fundamentalist seminaries and organisations perpetuating such supremacist beliefs that are driving young Muslims to prey on Hindu girls.

But the worst role here has been of the elites in Hindu society, who not only ignore such crimes, but demonise those who try to raise their voices in protest. The latest Tanishq ad is but one manifestation of the way our elites are throwing ordinary Hindus under the bus in blind pursuit of their lazy, utopian, feel-good ideas.

If this trend of targeting Hindu girls by the ‘minority’ does not stop, and the secular state keeps ignoring Hindu angst, the resultant anger could boil over in unpredictable ways and rip the Republic apart. The least our law-makers can do is take a leaf out of the Myanmar playbook to introduce a special law to crack down on such targeting of Hindu girls.