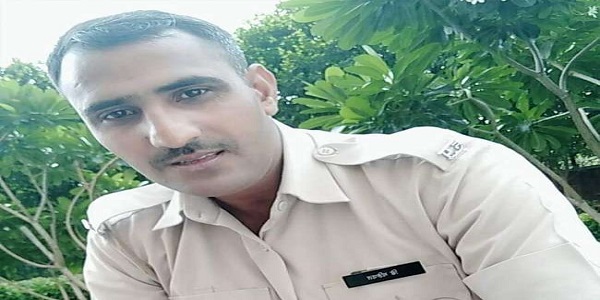 The daylight shooting of an Additional District and Sessions Judge’s wife and son by his personal security officer (PSO) in Gurugram on Saturday appears to be a religiously motivated hate crime.

#WATCH: Wife and son of an additional sessions judge shot at by the judge's gunman in #Gurugram's Sector-49. Both the injured have been admitted to the hospital and the gunman has been arrested. pic.twitter.com/rMqXdYHrxR

On Saturday, head constable Mahipal Singh (32) drove Judge Krishan Kant’s wife Ritu (45) and son Dhruv (18) to Arcadia Market in South City -2, Gurugram. As the mother-son duo were coming out of the shopping complex around 3.30 PM, he shot them both in broad daylight in the crowded market place. Ritu, who was shot twice in the chest, succumbed to her injuries at the hospital, while Dhruv who was shot thrice, including twice in the head, has been declared brain dead, Daily Pioneer has reported.

After shooting them, Mahipal called the Judge and chillingly told him, ““I have shot your son and wife”. As reported in The Tribune, Deputy Commissioner of Police (DCP East) Sulochna Gajraj told reporters that the accused made three calls after fleeing from the scene of the crime. Out of these, one was to his employer of two years. He then reached a police station where he fired in the air and fled before the station house officer (SHO) could nab him.

As per both Daily Pioneer and The Tribune, the police team probing the case said that the accused confessed, “I have finally shot shaitan (devil) and his mother.”

The investigating officials claimed that he had been constantly talking about his recent conversion to Christianity, and quoting from the Bible. He was saying that it was every Christian’s duty to eliminate demons.

“Investigations are on and we are still to know the real motive. Yes, he had been speaking about the Bible,” said Commissioner of Police KK Rao.

Hindustan Times has reported that Singh had converted to Christianity ‘five days ago’ and he told police he felt he had been “possessed” at the time he fired his service revolver. Times of India has not mentioned anything about the accused’s religious conversion, and instead quoted an unnamed police officer as saying that the accused seemed ‘mentally unstable’.

The latest TOI report starts off by saying that police are looking for Mahipal Singh’s spiritual gurus – a “guru” and “guru ma”.  ‘Guru’ is a Sanskrit term that connotes someone who is a teacher, guide or master – it is often used in connection with Hindu religious teachers.

Buried further down in the report is the following –

“Investigators are also looking into a cryptic Facebook image he uploaded on Friday, a day before the shooting. It appears to be a note with a message, scribbled in a blue pen, which mentions a ‘Pastor Robin’. Mahipal led investigators to a room near Tau Devi Lal stadium on Saturday from where two paintings and a few pamphlets related to religion were recovered. Police did not disclose their contents.”

No prizes for guessing which religion those pamphlets related to.

“Police have set up a special investigation team (SIT) under DCP (east) Sulochana Gajraj. They also released a statement denying Mahipal had mental health problems, though a senior cop had alluded to suspected “psychological issues” hours after his arrest on Saturday.

“He had no medical history and he was not under treatment for anything,” Gajraj told TOI, adding he was going through “some domestic tension”. She also said Mahipal, who had been with judge and his family since 2016, had not complained of harassment or ill-treatment.”

It is Hindi daily Dainik Jagran which first did a deep dive into Mahipal Singh’s antecedents and filed a detailed report. Here is a summary of what the Jagran investigation shows –

“Mahipal Singh was a resident of Bhungarka village in Nangal Chaudhary area of Mahendragarh district, Haryana, and had converted to Christianity 3 years back. He was influenced by a Christian preacher Indraraj Singh. Indraraj Singh and his lady partner apparently ran a large missionary gang in South Haryana, Uttarakhand, Himachal Pradesh, Uttar Pradesh and Delhi.

According to CID sources, on August 11, 2015, police conducted a raid after a complaint by villagers of village Bhawarka, in the Narnaul subdivision of Mahendergarh district, that people were being converted into Christianity by using quackery and fraud healing promises. The main accused in that case was none other than Indraraj Singh, who was arrested and presented in court.

At that time, Mahipal came out openly in support of his mentor & preacher. Mahipal’s mother Sarita opposed him. Disturbed by her son’s behaviour, she left their home and started living with her brother in another village. Villagers of Mahipal’s village also protested his behaviour and so he left the village for Gurugram with his wife and two daughters and started living in Gurugram Police Lines.

However, Mahipal continued with his missionary activities. He used social media and also made multiple visits to Mahendragarh district to brainwash the youth and lure them to convert. CID sources say that Mahipal has so far converted more than 2 dozen youth, many of whom are in the CRPF (Central Reserve Police Force) while some are doing private jobs in Delhi.

On August 21, 2018, police raided Sanwaria hotel on Nijampur road in Narnaul tehsil of Mahendragarh district and detained 8 people, including a CRPF personnel and Christian preacher Indraraj Singh’s lady partner, for illegal conversion activities. Here too, Mahipal intervened and managed to get them released after minor interrogation.

For the past few month’s, Mahipal had been trying to convince the judge’s family to convert to Christianity. He would often have quarrels with them on this issue, but would eventually apologise to avoid any harm to his service. Fed up with his behavior, it is said that Mahipal’s wife also left their Gurugram residence along with the children and returned to her native village of Rozka.”

On Saturday, it appears that Mahipal Singh had one argument too many with Judge Krishan Kant’s wife & son over converting to Christianity, and he shot them dead out of a zeal for eliminating the ‘devil’.

It is plain as day that the missionary mafia has spread their tentacles to each and every part of the country. Social media activists like @noconversion have been tirelessly covering the illegal, unethical and divisive techniques used by these religious bigots, and HinduPost too has penned several pieces on their activities.

The main thrust of missionaries trying to convert Hindus is that Hindus & other Dharmics are worshippers of false gods, or Satan (the devil in Christian theology). Influential evangelist hate-monger Mohan Lazarus recently said as much when he called Tamil Nadu’s Hindu temples as ‘Satan Strongholds’, and even labelled Delhi’s Birla Mandir and Amritsar’s Golden Temple in the same category.

The missionary enterprise has really taken off in Bharat since the early 2000s due to a variety of reasons – 1.) Pope John Paul’s John Paul II’s declaration in 1999 to evangelize Asia in the third millenium 2.) New wave of radical Protestant evangelicals empowered with powerful data mapping & information provided by American groups like Joshua Project, 10/40 window etc. 3.) Abuse of globalization & open borders 4.) Financial muscle – Annual income of Evangelical Christians is approximately $7 trillion (over 3 times Bharat’s GDP), and $700 billion is donated to Christian causes ($45 billion of this goes for direct missionary work). 5.) The UPA decade from 2004-14 when missionaries had untrammelled access to the length and breadth of the country and the legal regime was radically altered to make it openly anti-Hindu. 6.) FCRA through which ~ Rs. 18000 crores (~ $2.5 billion) of foreign money, lion’s share of which goes to Christian organizations, is pumped into the country each year.

The subversion of Hindu society from within has reached alarming proportions. This tragic murder has come as yet another reminder of the true religious intolerance that is destroying the social fabric of our country & civilization.