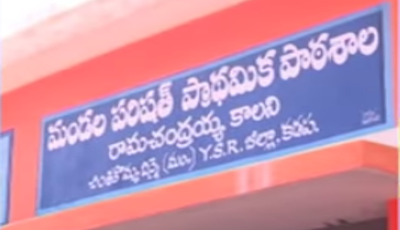 A shocking case of religious indoctrination & flouting of educational norms has come to light from a Government school in Kadapa district, Andhra Pradesh.

The Govt. school teacher in Ramchandrapuram village, Kadapa Dist., AP makes children recite Bible instead of subjects, and justified his actions by saying that ‘only Bible will make them dear to Jesus not subjects,’ the Telugu language Bharat Today news channel has reported.

Here is the full video of the Bharat Today report –

Such cases of indoctrination by right-wing fundamentalist Christian teachers and principals are common in missionary-run convent school across Bharat, but now it appears that the fanaticism is spreading to Government schools as well.

For eg., the Director of the posh Mount Carmel chain of schools in New Delhi, Dr. Vijay Kumar Williams, is notorious for openly preaching Christianity to students during morning assembly and even rubbishing Hindu Dharma and well-established scientific theories in the process.

Cases of Hindu students in such convent schools being severely punished for celebrating Hindu festivals or temporarily sporting some Hindu symbols as part of their religious/cultural practise, are well documented.

The situation is no different in Muslim-majority regions like Haryana’s Mewat, where last year two Muslim teachers in a government-run residential school faced action for forcing namaz (Muslim prayers) on the only two Hindu students of the school.

However, such cases do not raise the hackles of our left-liberals, who are otherwise quick to shout ‘Saffronization’ on even the suggestion of teaching Yoga in schools or revising the curriculum to give more prominence to neglected Hindu historic figures.