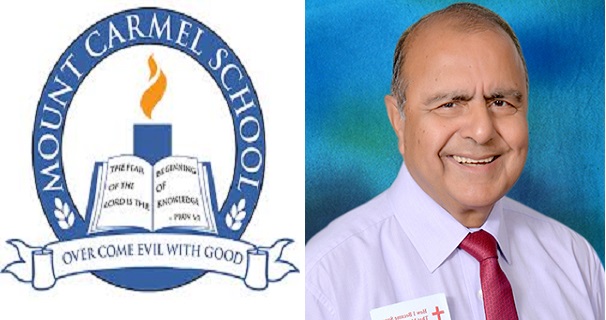 Dr. Vijay Kumar Williams, the Director of Mount Carmel Schools, New Delhi regularly addresses students of the school during morning assembly. The videos uploaded by the school on YouTube show Dr. VK Williams routinely delivering Christian sermons to the students, encouraging them to convert, and he can be seen openly rubbishing well-established scientific theories and Hindu Dharma in at least two such videos.

The main points made by Dr. Williams in this 14 minute address on 21 Jan 2013 to students of Mount Carmel School, Anand Niketan are reproduced verbatim below :

In this video, Dr. Williams can be heard saying –

“We have been seeing that prayer is talking with God. It is not mantras, recitation of some useless words, meaningless words. God is our Father who is expecting us to speak to him for our problems, the deepest pains…..the Bible wants us that we should acknowledge this father…but we have chosen another father, i.e. the Devil – we have chosen to ape him, in our behavior of speaking lies…we have become people who have decided that I will make own God through a religion, and that is what I will worship. So we have turned away from the reality of God my father, to Devil my father…Bible tells us that every human being can be a child of God. That we saw in John, chapter 1, verse 12…if salvation is so simple, if becoming a child of God is so simple, why don’t you do it? Why do you ignore it?..a person called Jesus was born of virgin birth, he lived 33 years..historically, he did those things….I want you to all, teachers and students, to try Jesus – to give him one chance. He wants to be your father. May God bless you.”

The first Mount Carmel School started in July 1972 with 12 students in a small residential house in Anand Niketan. Today the school has over 3000 students with a staff of 150 in 2 beautiful buildings.

The Dwarka Branch was started in April 1997, the Silver Jubilee year of the mother school, with 165 students. This too has over 3000 students and staff of 150.”

It is not rocket science to understand what impact such dangerous, delusional indoctrination must be having on impressionable minds. Should Bharat allow such bigotry-spewing, proselytizing individuals & institutions to run schools, to sow seeds of hate for their own culture & way of life in generations of Hindus, Sikhs, Jains etc? Shouldn’t MHRD act against such schools, and monitor the kind of divisive teachings being imparted. How is this convent any better than a madrassa where children are brainwashed about fundamentalist Islam and taught to despise kafirs (non-believers).

With a sectarian, deeply flawed law like RTE, introduced as a pet project of Sonia Gandhi by UPA-2 in 2010, slowly strangulating Hindu run schools, will the Hindus of Bharat soon be left with no other choice than to send their wards to convent schools like Mount Carmel, where the children are exposed to predatory conversion tactics and brainwashing of authority figures like Dr. VK Williams?