Amravati farmer dies of heart attack after brother commits suicide due to non-payment by 2 Muslim traders, harassment by police 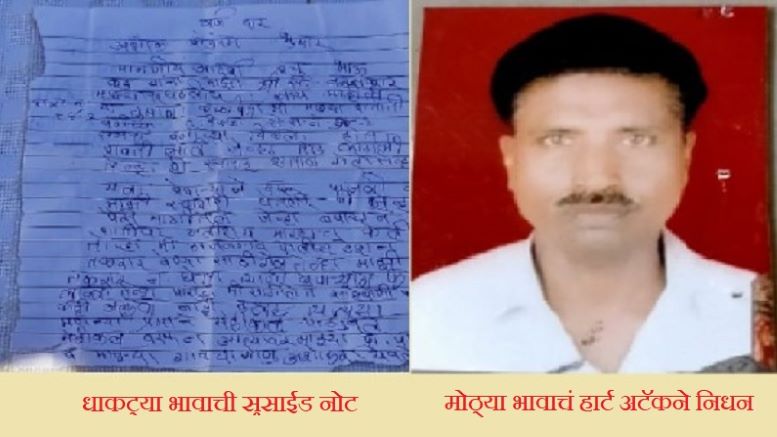 Orange farmer Ashok Bhuyar had written to MVA Cabinet Minister Bacchu Kadu asking for help before committing suicide due to non-payment of dues by two traders Sheikh Amin and Sheikh Gafoor. However, the Bhuyar family from Amravati had to bear the grief of two deaths in the family on the same day (22nd December). While digesting the shock of his younger brother Ashok’s suicide, Sanjay who was returning from the funeral also succumbed to a heart attack.

Ashok, an orange grower from Dhanegaon in Anjangaon Surji taluka, committed suicide by consuming poison. He had written to Bachchu Kadu, Minister of State for Water Resources, School Education, Woman & Child Development, and Labour who is also a 4-time MLA from Achlapur constituency in Amravati district, seeking justice.

In the letter, Ashok had alleged that two traders did not pay for the oranges they took from him, and that the police were not cooperating. He also claimed to have been beaten by traders and police.

After Bhuyar’s suicide, Anjangaon Surji police station was surrounded by villagers. The villagers demanded action against the station officer and the beat police officer. Orange traders Sheikh Amin and Sheikh Gafoor, along with Sub-Inspector of Police Deepak Jadhav, have been booked in the case.

After Ashok Bhuyar’s body was cremated, his elder brother Sanjay Bhuyar could not bear the shock of the death of his younger brother and suffered a massive heart attack. He was admitted to hospital, but lost his life during treatment. The death of two brothers on the same day has created a stir in Amravati district.

This tragedy comes at a time when a section of farmers from Punjab and Haryana are protesting recent farm reforms introduced by the centre. The new farm laws allow farmers the opportunity to sell outside state-run APMC mandis, including to inter-state buyers, and also provides for contract farming with agribusiness firms or large retailers at a pre-agreed price, with safeguards like insurance, credit instruments and a dispute resolution mechanism.

Experts have backed the reforms as they can break the cartels formed by local middlemen, most of whom have political links as they fund various political parties, which deny better prices to ordinary farmers.

Ashok and Sanjay Bhuyar’s tragic death highlights the sort of status-quoism and shoddy law enforcement that persists in the country’s hinterland due to our obsession with socialism, social justice and federalism, all of which have become convenient excuses for vested interest groups to perpetuate their agendas. This case also demonstrates that contrary to projection of the Muslim minority as victims, the ground reality is often very different.