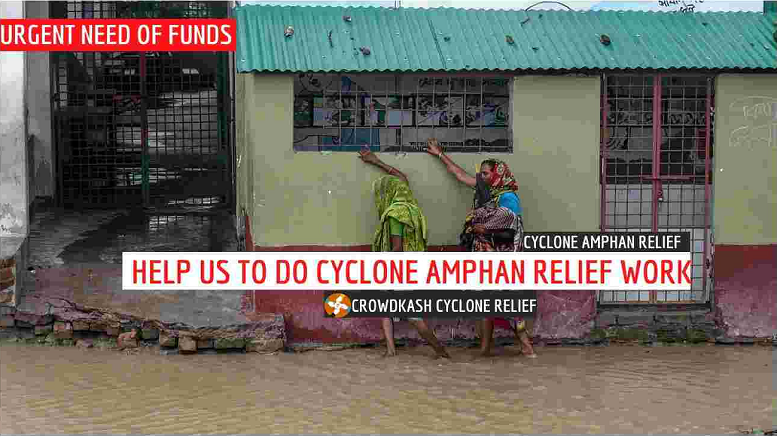 Cyclone Amphan has killed at least 72 people in West Bengal and 2 in Odisha, and left a trail of destruction and damage mostly in WB.

The storm, which made landfall around 20 km east of Sagar Island in the Sunderbans on Wednesday afternoon, packing winds gusting to a top speed of 185 kilometres per hour, cut off road links, snapped telecommunications and left parts of West Bengal without electricity. It flattened houses, uprooted trees and power pylons, causing rivers to swell and breach their embankments. It hit Kolkata at a wind speed of 130km per hour, reports Hindustan Times.

Even many areas in state capital Kolkata and its surrounding areas went without electricity on Thursday and telecom disruptions meant district officials could not contacted for proper assessments. It is believed that two districts – North and South 24 Parganas – have borne the maximum damage. Most of the deaths had been caused by electrocution and falling trees, and death toll is likely to increase as more information trickles in. CM Mamata Banerjee has requested urgent help from the centre.

Evacuation of 658,000 people – 500,000 in WB and 158,000 in Odisha – before the cyclone arrived prevented an even bigger loss of life. The National Disaster Response Force (NDRF) said that the India Meteorological Department’s (IMD) “climatological intelligence” was accurate and helped in saving lives and minimising damage. Four more NDRF teams are being airlifted from Chennai and Pune, at the request of the WB Govt.

However, official aid is unlikely to suffice, especially in a state like West Bengal where relief work even during the ongoing Covid-19 pandemic has been patchy, riddled with corruption, and with clear bias against Hindus who voted against the ruling TMC in previous elections.

Hence, we urge readers to support direct relief work being done by credible organisations. One such effort is being spear-headed by Devdutta Maji, a social activist for the past 15 years who also heads the NGO SinghaBahini.

A crowdfunding effort launched by Devdutta Maji informs that the cyclone has affected many people, levelled thousands of homes, destroyed paddy crops and swept away livestock.

Team of over 500 volunteers are on ground & started the rescue and relief efforts in the affected areas of South 24parganas, East Midnapore, North 24parganas. To scale up our relief efforts, your support is needed.
Click to support : https://t.co/uaNyJjXQqF pic.twitter.com/AQrzxACS6Q

His team of over 500 volunteers is on the ground and has started the rescue and relief efforts in the affected areas.  To scale up their relief efforts, they need our support.

Funds raised will be used to distribute relief kits to worst affected families. They will also be distributing asbestos sheets for houses, provisions and other relief materials so that the disrupted lives can return back to normalcy quickly.

They are carrying out relief work in the worst-affected districts of West Bengal : South 24 Parganas, East Midnapore, North 24 Parganas and also others.

Devidutta Maji is well known for rescuing young girls from trafficking & grooming gangs, and has also been working with victims of communal riots. He is actively involved with running a residential school in Deoghar, Jharkhand, for the children of extremely poor tribal families.