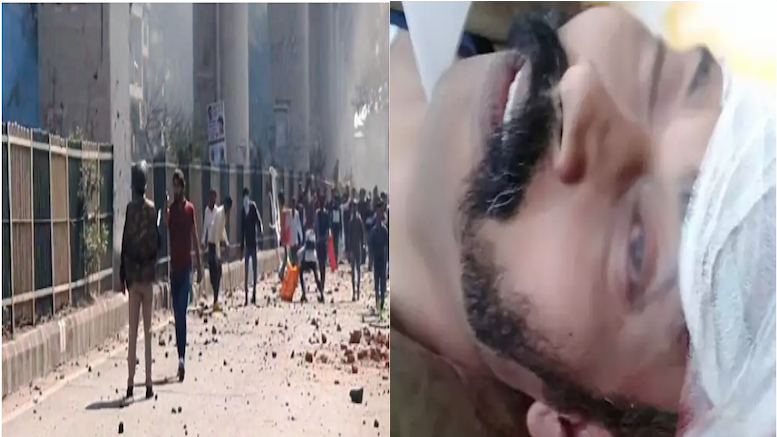 Multiple violent protests against CAA (Citizenship Amendment Act) have broken out in Delhi’s trans-Yamuna Muslim localities since yesterday, to coincide with the visit of US President Trump and internationalize the false narrative that CAA and NRC are designed to strip Indian Muslims off their citizenship.

In December too, Delhi had witnessed multiple episodes of violent protests against CAA – in Jamia Nagar, Seelampur, New Friends colony etc. Mobs shouting Islamic slogans had attacked policemen in Seelampur and even pelted stones at a school-bus. A bomb had exploded in a protester’s hand before he could throw it.

Muslim women have been staging a well-publicized & well-coordinated sit-in at Shaheen Bagh for over two months. Public resentment at the way their city has been held hostage, and the administration and judiciary’s helplessness to move protestors to designated protest sites like Jantar Mantar or Ramlila Grounds has been growing.

On Sunday evening, a group of people clashed with another group that was holding a demonstration against the citizenship law in Delhi’s Maujpur area. On Monday, stone-pelting was reported between pro and anti-CAA protesters. Several vehicles, shops and houses were also torched.

All this happening in the National Capital. Can't believe my eyes as I report from ground zero in #Maujpur and witness all this pic.twitter.com/3Uq9Legtpc

It was these clashes that Head Constable Ratan Lal was trying to pacify when he was hit by stones on his head. He was taken to a nearby hospital where he died of his injuries. Police had to fire tear gas shells and also resort to lathicharge to disperse the protesters.

In Delhi’s Jaffarabad area, an anti-CAA rioter opened fire and directly pointed his gun at head constable Neeraj Dhaiya, who bravely held his ground. A video of the same was shared by a journalist.

Controversial ‘journalist’ Barkha Dutt, a known propagandist for Islamist causes, has shared images of more violence from Chandbagh area of the capital. DCP Shahdara’s car has reportedly been set on fire near Chand Bagh bazaar.

Delhi Lieutenant Governor Anil Baijal has instructed Delhi Police and Commissioner of Police to ensure that law and order are maintained in North East Delhi.

But it will take more than perfunctory statements to control the lawlessness that has gripped parts of Delhi for the last 2 months, under the guise of these motivated anti-CAA protests which are nothing but a naked attempt by the Islamist lobby to threaten the Bharatiya state. The law & order machinery has to deal with law-breakers in the same way that it deals with all violent protests – whether it was the Jat reservation agitation in Haryana, violence by Dera Sacha Sauda supporters, or the way UP Police controlled violent anti-CAA protests in UP.